Take the case of Florida congressman Matt Gaetz, who is facing accusations regarding his personal behavior ranging from the tawdry to the criminal. To date, no charges have been filed against Gaetz, and he has asserted that he has been the victim of an extortion plot.

If Gaetz's fellow Republicans refuse to distance themselves from him, the liberal media would surely accuse them of covering for a miscreant. But what if Republicans do denounce Gaetz? Well, that doesn't win them any brownie points either in the eyes of the "facts first" media.

Take MSNBC analyst John Heilemann on today's Morning Joe. He launched a pre-emptive strike against Republicans, with the goal of ensuring they'd receive no real moral credit should they denounce Gaetz.

"This is an opportunity for Republicans . . . in a totally self-interested way, to  . . . take some kind of a purely cynical public-relations driven approach, which is like, get on our high horse. They have no moral standing to take this position, by the way. But to throw Matt Gaetz over the side will make them feel better and they think give them some kind of credibility for having walked away from someone who is clearly, like I said, at this point, I think terminally toxic."

Got that? No Republican could possibly denounce Gaetz out of good motives. It could only be a "totally self-interested, purely cynical, public-relations driven approach" for which "they have no moral standing."

Unlike Democrats, who, of course, have magnificent moral standing. And who have acted only in accordance with the purest of motives when they have denounced or distanced themselves from fellow Dems caught in sex scandals. They have a media on their side that ignores sexual accusers for months or years. 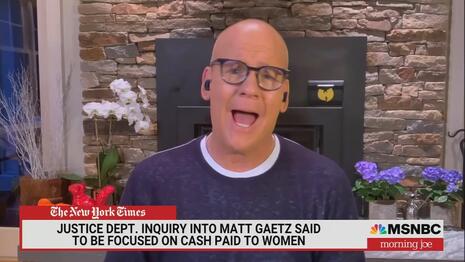 On that matter, Heilemann has some first-hand experience in dealing with a colleague enmeshed in a sex scandal. For years, Heilemann worked closely with Mark Halperin. The pair co-wrote two books about presidential campaigns. For three years, Heilemann and Halperin co-hosted a political analysis show on Bloomberg TV and MSNBC. Heilemann also co-starred with Halperin in Showtime's documentary series The Circus, a behind-the-scenes look going out on the road for the 2016 presidential election.

In 2017, Halperin was the subject of a major sex scandal. A dozen women came forward, accusing Halperin of sexual abuse. He was ultimately fired by NBC, MSNBC, and Showtime.

So how did Heilemann handle the scandal? Did he throw his long-time partner under the bus? Defend him? Nope: Heilemann went for the credulity-stretching claim that he was totally, completely, unaware that Halperin had ever been involved in anything sketchy. Talk about a "cynical public-relations-driven approach"!

"I had never heard of, been exposed to or had any inkling of the notion that he had engaged in any behavior that could be described in even the broadest sense of being sexual harassment or sexual assault.”

If Heilemann was telling the truth, and had no "inkling" of Halperin's misbehavior despite years of working so closely with him, Heilemann must be incredibly obtuse—hardly a desirable quality in a TV "analyst."

MSNBC's John Heilemann pre-emptively accusing Republicans of acting out of cynical motives should they condemn Matt Gaetz was sponsored in part by Hulu.

JOHN HEILEMANN: [Gaetz] was very loud. He was very brash. He became, he understood how to play, in the Trump era, when volume, and shamelessness and, and garishness were the, the kind of badges of honor, and the things that attracted media attention, Matt Gaetz was the perfect flower of that moment.

And so now, you know, of course, we are now learning that this Florida bro, basically, you know, turns out, who’s running around with an indicted sex trafficker and has been walking around apparently showing his best pictures off his phone to his friends on the House floor of his sexual — I don’t even want to call them conquests. Because if you’re paying for them, they’re not conquests. Right?

So it turns out that the guy is, is, by every indication what we’re hearing now, he's skeevy. And I would say, what the dynamic here is--and this gets to Claire's [McCaskill] point. I don't actually think it matters, I mean, I think it matters if there’s a federal charge here. If there's a sex-trafficking charge here, that matters. It matters if there's a state charge. Those are legal things, right?

This is an opportunity for Republicans, I think right now, and in a totally self-interested way, to be like, let’s get away from that, and let’s take some kind of a purely cynical public relations-driven approach, which is like, get on our high horse. They have no moral standing to take this position, by the way. But to throw Matt Gaetz over the side will make them feel better and they think give them some kind of credibility for having walked away from someone who is clearly, like I said, at this point, I think terminally toxic.