I say "political integrity expert," you say "Eliot Spitzer."  I say "you're kidding me, right?"

Rachel Maddow actually got off to a good start last evening in her segment on political sleaziness, ripping politicians both Dem and Republican for a variety of venal sins.  But of all the people to bring on as your expert to discuss how to raise the moral bar . . . Client 9?  Surely you make mirth, Ms. Maddow! View the video after the jump. 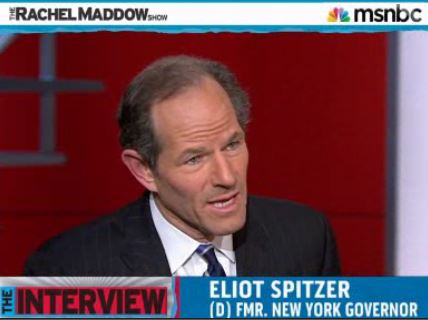 Maddow devoted a segment to a variety of dubious behavior by politicians: from Dems and Republicans accused of selling a mayoral nomination, to questionable political contributions in the Old Dominion, to the revolving door between regulators and industry.

Now it's true that while Spitzer stood guilty of sins of the flesh, the multi-millionaire was never accused of corruption of a pecuniary sort. Even so, among all Maddow's options for a guest to opine on improving integrity among politicians, Eliot Spitzer, really?  Maddow even broke out the old "Sheriff of Wall Street" moniker to honor Spitzer.  Please. The luster went off that badge long ago.  Nor did Spitzer or Maddow ever allude to the Client 9 troubles that drove the Sheriff to resign as governor of New York.

Nope, this was straight-up pontificating on the subject from someone an unaware viewer would have assumed to be pure as Ivory flakes.

I'll be back with the transcript.