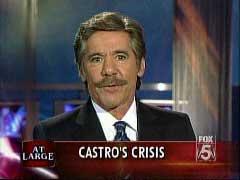 Fidel and the NY Times: Love at First Sight

As Fidel Castro, dictator of Cuba since 1959, malingers in a shadowy state of sickness, the Times for some reason points us to the embarrassing 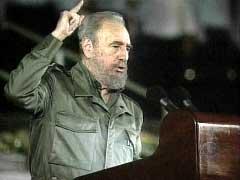 As news organizations update their obituaries of ailing Cuban dictator Fidel Castro, it’s worth recalling how many liberal journalists have fallen under Castro’s spell over the years, sounding like paid Cuban government propagandists as they touted the “great success stories” of Castro’s decades of communist rule.

The uniformed Cuban military officer pictured here barks commands at a smallish crowd in Havana that responds with pro-Fidel chants. Imagine you're an objective journalist. How would you report it? "The Castro regime orchestrates a public show of support," perhaps? Not Andrea Mitchell. Appearing on this morning's Today show, here's how NBC News' Chief Foreign Affairs Correspondent characterized what you have to imagine was a less-than-spontaneous event:

"In Havana, Cubans turn out to show support for their long-time leader."

Andrea managed to get through her segment without mentioning Communism, repression or anything else that would cast aspersions on Los Hermanos Castro. She even obligingly passed along this bit of Castro propaganda: "He [Fidel] is calling on Cubans to remain calm, and they seem to be." Despite all the conjecture as to the state of his health Fidel hasn't made any public appearances. How can Mitchell know that it was indeed the great leader who was 'calling on' the Cuban people? And was it Fidel's reassuring words, or living in a police state, that had that calming effect on the Cuban people?

The Poynter Institute's Romenesko weblog draws some strange letters, where some feel passionately that dictators like Fidel Castro and terrorist groups like Hezbollah have been maligned by media labeling. Yesterday, Harrison Chastang of the non-commercial San Francisco radio station KPOO-FM complained:

Did you know that Senator Mel Martinez is "almost giddy" over the impending death of Cuba's brutal dictator, Fidel Castro? CNN sure did. It seems that CNN has mystically divined Senator Martinez' emotions and revealed their amazing mind reading abilities for all of us to enjoy.

Right there on their web page linking us to their story it blares. "Lawmakers almost giddy over Castro's illness", the headline trumpets. Later in their story they repeat the negligently emotive rhetoric.

"Another Cuban-born U.S. politician, Sen. Mel Martinez, was almost giddy over the report of Castro's surgery.

"My hope is that there will be an opportunity for voices of freedom to be heard in Cuba, that this could begin a moment of transformation and transition to a better life and a better day," the Republican from Florida told reporters.

Martinez described his reaction to Monday's report that Castro is ill as "intensely emotional."

As the totalitarian communist dictator of Cuba for 47 years, Fidel Castro repressed those who worked for democracy, human rights and a free press. Yet through the decades, many in the American media have maintained their romanticized mythology of Castro as a progressive revolutionary icon, provider of “free” health care, a Latin American David vs. the Goliath of the United States.

In contrast to their coverage of right-wing dictators, like Chile’s Augusto Pinochet, journalists do not often mention those killed, imprisoned or exiled by Castro’s ruthless “revolution,” but treat him as a celebrity head of state. Just a few years ago, ABC’s Barbara Walters trekked to Havana to produce yet another soft feature on the dictator.

“For Castro, freedom starts with education,” Walters oozed on the October 11, 2002 "20/20." “And if literacy alone is any yardstick, Cuba would rank as one of the freest nations on Earth.”

Now that Fidel’s reign may have ended, it was interesting to see that the New York Times Web site included a sidebar "From the Archives," with links to PDF versions of their own coverage of Castro’s rise to power in the late 1950s. I didn’t read them all, but one that I clicked on showed an incredible pro-Castro bias, with the Times justifying Castro’s executions of political opponents, touting his genius and insisting that his new government wasn’t communist but “conservative.”

We're #156! Cuba, that is, in this CIA ranking of per capita income of the world's countries. Cuba trails such economic powerhouses as Guyana, Micronesia and, of course, Niue. But, hey, it's a full $200 ahead of basket-case Angola!

But economic beauty is in the eyes of the beholder. To the Associated Press, the Cuban economy, with a litle help from designated Fidel-successor Raul, is 'successful.' Here's an excerpt from an AP article of today [hat tip to Drudge]:

"Raul has been deeply involved . . . with the military's successful peacetime efforts to help rescue Cuba's economy following the collapse of the Soviet Union in 1991."

Ask AP: Why Describe Castro As Having 'Presidential' Powers?

High on the list of annoying media tics is their tendency to call murderous totalitarian dictators "presidents." That ought to be an honorific reserved for elected leaders. But here's the AP dispatch that ran in Tuesday's Washington Post:

Fidel Castro temporarily relinquished his presidential powers to his brother Raul on Monday night and told Cubans he underwent surgery...

Luv Ya, Fidel! CBS Says Cubans 'Shook Up' By Castro's Hand-Over of Power 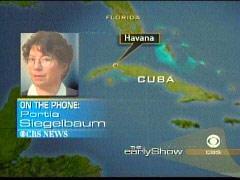 In Miami, Cuban-Americans were literally dancing in the street at the prospect that the repressive regime of Fidel Castro might finally be drawing to an end. But back in Cuba, people greeted the news of the great liberator's illness with dismay. At least, they did according to CBS News' woman-on-the-spot.