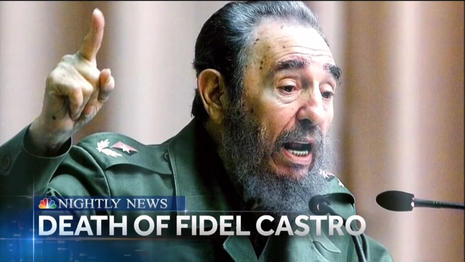 Six years ago today, November 26, 2016, news broke of the death of Fidel Castro, the former communist dictator of Cuba. Castro’s communist regime executed hundreds of political opponents and drove tens of thousands more into exile. The U.S. State Department, Amnesty International and Human Rights Watch all listed Castro’s Cuba as among the worst violators of human rights on the planet.

Yet liberals in the U.S. media — who rightly condemned such abuses when perpetrated by dictators such as Chile’s Augusto Pinochet — inexplicably remained enchanted with Castro and his socialist revolution. His death at age 90 was an opportunity for journalists who should have known better to salute the prison state’s advances in health care, and to mindlessly babble about how Cubans supposedly preferred donkey carts to modern automobiles.

Then-MSNBC anchor Chris Matthews recalled how Castro was celebrated as a “romantic figure” and “folk hero” in the late ’50s, at least until “he began executing people and joining the Soviet side.” Yet Castro’s deplorable record on human rights was not enough to break the bonds of liberal affection he enjoyed among many in the American media.

Here are some of the lowlights from coverage six years ago:

■ “He was a romantic figure when he came into power. And when he knocked off the corrupt dictator [Fulgencio] Batista we American, young high school kids and kids in those days rooted like mad for the guy. We thought here was this guy in fatigues with a beard coming in out of the country side, leading a revolution and swept aside this old corrupt regime. And he was going to be almost like a folk hero to most of us for many months....He would be a figure that you’d look up to and say ‘God this guy is great!’ And then, of course, he began executing people and joining the Soviet side.”
— Hardball host Chris Matthews during MSNBC live coverage of Castro’s death in the morning of November 26, 2016.

■ “It’s very easy to have a simplistic view, that he was all awful for Cuba and the world, and I just don’t think that’s accurate. I think that the Cubans have a tremendous sense of pride over his legacy, and I think that he will be remembered fondly.”
— FNC’s Geraldo Rivera on Fox & Friends, November 26, 2016 talking about the death of Cuban dictator Fidel Castro.

■ “Even Castro’s critics praised his advances in health care and in education....Fidel Castro was considered, even to this day, the George Washington of his country among those who remain in Cuba.”
— Correspondent Jim Avila during ABC News coverage of Castro’s death early in the morning of November 26, 2016 .

■ “A declared socialist, he dramatically improved health care and literacy....He never tolerated free elections or dissent but gave his people better health care and education....I think he will be revered as someone who brought education and social services and medical care to all of his people.”
— NBC correspondent Andrea Mitchell during MSNBC’s breaking news coverage of Castro’s death in the early morning of November 26, 2016.

■ “Whether you love Fidel Castro because of what he did in education and health care, or hate him because of civil rights and human rights, there is no doubt that he is considered here a revolutionary hero. Not only in Cuba, but in many place around the world, and also for his defiance of the United States.”
— Host Charlie Rose from Havana, on CBS This Morning, November 28, 2016.

■ “It’s still one of those nations where you see donkey carts alongside cars, trucks and buses in downtown Havana, because that’s exactly what they’d rather have for transportation.”
— Ex-NBC Nightly News anchor Brian Williams during MSNBC's live coverage of Castro’s death early in the morning of November 26, 2016.