Underreported: The Irony of BP's 'Beyond Petroleum' PR Crusade

One narrative the liberal media has strenuously failed to develop is the incredible irony of BP presenting itself as the greenest oil company, the "Beyond Petroleum" folks who recognized they were boiling the planet with oil. In Friday's Wall Street Journal, Mark Mills reviewed a new book, Oil, by Tom Bower:

But the most interesting figure in Mr. Bower's narrative is not Mr. Putin but BP's Lord Browne, who understood cultural politics better than his peers. In the 1990s, BP launched what was arguably the oil industry's most successful public-relations campaign, for all the good it is doing the company now. The campaign transformed BP into a shining example of a progressive company—one supposedly "Beyond Petroleum."

It is clear from Mr. Bower's account that, while BP remained first and foremost an oil company, Lord Browne drank his own Kool-Aid, basking in encomia from the media and green mavens. He gave lectures at Stanford, appeared on "Charlie Rose," cozied up to Greenpeace and promised to spend $1 billion on solar technology.

Robert Redford, one of the most popular and succesful actors of our age, has joined with other entertainers, including Sir Paul McCartney and Rosie O'Donnell in encouraging the Obama administration to actively politicize the Gulf crisis and use it to push through on energy policy.

In an interview with ExtraTV, Redford said that Obama should "Grab this moment in history and get a decent energy policy." He also said "Here's a moment in our history where he [Obama] should grab leadership and run with it."

CNN's Carol Costello and Jim Acosta revealed their disdain for a federal judge's decision to overturn the Obama administration's 6-month moratorium on offshore drilling when the expert they interviewed on the June 25 "American Morning" made a convincing case against the moratorium.

Tom Bower, an author who has written extensively on the oil industry, tried to explain the devastating economic impact the moratorium would inflict on an already beleaguered industry, but Costello and Acosta were blinded by ideology: "But isn't safety more important than money?" queried Costello. "Because, I mean, these oil companies make massive amounts of money each day."

Bower, author of "Oil, Money, Politics and Power in the 21st Century," drew the ire of Costello and Acosta for calling the Gulf oil spill an "aberration" and noting the oil industry's "phenomenal" overall safety record.

"But that's what they say, it is just an aberration, but the BP disaster happened," argued Costello. "Nobody thought that could happen either. So, it's just not logical, is it, that argument?" Seems the only thing gushing more than the BP oil spill these days is the disaster brewing in Paul McCartney's mouth.  In an exclusive interview with The Sun, McCartney takes a major swipe at global warming realists, er, deniers, by stating (emphasis mine):

"Sadly we need disasters like this to show people. Some people don't believe in climate warming - like those who don't believe there was a Holocaust."

Well that's putting things in perspective.  I'm not sure global warming has been proven to have caused the Deepwater Horizon oil rig explosion.  Missed that report.  Regardless, it remains unclear how the theory of global warming is in any way similar to the reality of the Holocaust.

McCartney goes on to defend President Obama from any and all criticism concerning the Gulf disaster, culminating with the revelation that he "really love(s) him."

By NB Staff | June 25, 2010 11:42 AM EDT
"The media, for like five seconds, those with thrill up and down their legs, they were a little critical of the Anointed One and what was one of the worst speeches in the Oval Office... but as soon as he fired McChrystal and hired Petraeus, they went nuts," Sean Hannity observed last night at the beginning of his recurring "Media Mash" segment with NewsBusters publisher Brent Bozell.

The Fox News host then rolled a montage compiled by Media Research Center (MRC) analyst Kyle Drennen which showed the mainstream media hailing Obama as "brilliant" for the personnel move.

After the montage, Bozell noted that the same media that proclaimed Obama sacking McChrystal as "brilliant" were claiming that the president really had no choice but to fire the Afghanistan commander. "If he had no choice, then it really wasn't really altogether all that brilliant," the MRC president observed.

Bozell and Hannity also discussed  the media's double standard in bashing BP CEO Tony Hayward -- who had been relieved of duty for overseeing the cleanup operation -- for yachting over the weekend, while ignoring President Obama's weekend golfing excursion and MSNBC's Mika Brzezinski admitting she was parroting White House talking points to defend the administration's handling of the ongoing crisis.

For the full MP3 audio of the "Media Mash" segment, click here. For video click here for the WMV file or watch the video embed above.

While MSNBC's Joe Scarborough has repeatedly defended President Obama's handling of the oil spill, he used his show on Thursday to trash Republican Joe Barton and focus on getting the Congressman removed from his position on the Energy and Commerce Committee.

is supposedly the "voice of the right" on the Morning Joe panel, but he conducted a 10-minute, one-sided rant against  Barton and GOP members of Congress.

Scarborough quizzed Representative Eric Cantor, "Why is Joe Barton allowed to keep his job when Joe Barton apologized to a corporation that is destroying my hometown and its economy and destroying the environment across the ?"

While MSNBC's Joe Scarborough has repeatedly defended President Obama's handling of the oil spill, he used his show on Thursday to trash Republican Joe Barton and focus on getting the Congressman removed from his position on the Energy and Commerce Committee.

Scarborough is supposedly the "voice of the right" on the Morning Joe panel, but he conducted a 10-minute, one-sided rant against  Barton and GOP members of Congress.

Scarborough quizzed Representative Eric Cantor, "Why is Joe Barton allowed to keep his job when Joe Barton apologized to a corporation that is destroying my hometown and its economy and destroying the environment across the Gulf Coast?"

Urgent Priorities and Common Sense in the Gulf 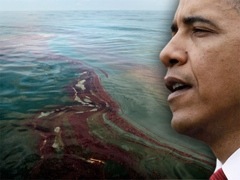 The ramifications of the oil spill in the Gulf of Mexico have not even begun to surface. We will be dealing with the ecological damage for years as the prime nesting grounds for shrimp, oysters and countless other varieties of sea life are destroyed by the leak at the bottom of the ocean that nobody seems to be able to deal with.

The economic damage is another entirely different animal that is going to rock the Gulf Coast and head inland with reverberations that will be seriously felt around the whole country.

The Obama administration is completely lost on how to deal with the spill and the president seems helpless except to appoint commissions and place blame anywhere except 1600 Pennsylvania Avenue.

I know that an oil leak at this depth has never had to be dealt with before and is a seriously difficult thing to fix, but somewhere on this earth, somebody knows how to fix it and it's high time to find him or her.

On the June 24 "American Morning," CNN's Carol Costello trumpeted a "revitalized" environmental movement that is hoping the Gulf oil spill will "change the way we feel about oil" and is aggressively lobbying Congress to pass radical climate change legislation.

Previewing the "Gut Check" segment, Costello gleefully teased, "Coming up next, environmentalists are revitalized and it's over the Gulf oil spill. Could this disaster be what we need in this country to change the way we feel about oil?"

In lockstep with the Left's environmental agenda, the fill-in anchor pondered whether the Gulf oil spill would crystallize support for a climate bill or would "it be back to business as usual?" Costello articulated the same phrase environmental groups frequently employ to manufacture a false sense of urgency around their liberal initiatives. 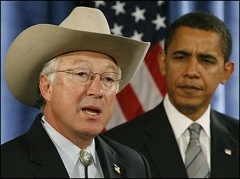 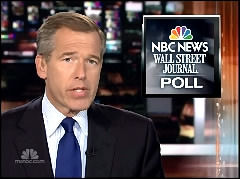 Unlike Katie Couric on Monday night, on Wednesday evening NBC's Brian Williams didn't hide the bad news for President Obama in the network's latest poll, but Williams and Savannah Guthrie sure seemed to lament the public mood's swing against Obama as Williams attributed it to how Obama “had to touch” the gulf oil leak, “he had to own it and now he's getting tagged with how he's reacting to it.” As if Obama had nothing to do with it, Guthrie agreed he's “had a barrage of bad headlines on some of these very issues of leadership, handling a crisis...”

“If you're the White House looking at these numbers we're about to debut tonight, there isn't much here that's encouraging right now,” Williams warned of the NBC News/Wall Street Journal survey findings. Guthrie agreed: “There's not a lot of good news in this poll for the White House. Gushing oil, persistent unemployment the real problem.”

Online, MSNBC.com's headline also ascribed Obama's troubles to the gulf: “Spill drags the President's rating down.” The subhead, over the posting by NBC News Deputy Political director Mark Murray, emphasized a bright spot in areas Guthrie noted declines : “A silver lining for Obama is that his personal scores are still strong.”