AP Lines Up Blame for Congress, Not Obama, For OPM Data Breach

Of all the media memes ever attempted, the one blaming Republicans for the fact that now-resigned Office of Personnel Management Director Katherine Aruchleta was confirmed is high on the list of the most ridiculous ever. A reasonably close runnerup is the idea that Congress failed "to adequately fund OPM."

Matt Balan at NewsBusters covered CNN's ridiculous tweeted claim that "Republicans acknowledge ... they didn't properly vet Archuleta's qualifications." It's as if only Republicans — who, I must remind the media herd, were in the minority in the Senate in late 2013 when she was confirmed and who opposed her by a 35-8 margin — were the only ones responsible for vetting this woman. Why isn't the press asking Harry Reid why his Senate Democratic Party majority didn't do its job? Far more fundamentally, did the president's responsibility for selecting competent people vanish when Barack Obama was elected?

In his coverage, the Associated Press's Josh Lederman added supposedly inadequate funding to the mix (bolds are mine):

UNDER FIRE FOR DATA BREACH, OBAMA PERSONNEL CHIEF STEPS DOWN 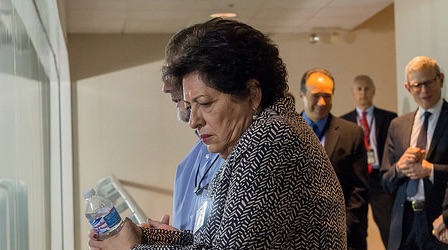 The embattled head of the government's personnel office abruptly stepped down Friday, bowing to mounting pressure following the unprecedented breach of private information her agency was entrusted to protect.

Katherine Archuleta had served as director of the federal Office of Personnel Management since November 2013. The former national political director for President Barack Obama's 2012 re-election campaign, Archuleta came under scathing criticism amid revelations this year that hackers - widely believed to be China's government - had infiltrated her agency's databases as well as background-check records for millions who applied for U.S. security clearances.

... Republican lawmakers who had fueled the growing calls for her resignation said it was too little, too late. Sen. Ben Sasse of Nebraska responded to the news with a two-word statement: "Not enough."

"It's a Band-Aid, but it's not going to stop the bleeding," said Rep. Jason Chaffetz of Utah, chairman of the House Oversight and Government Reform Committee. He said in an interview that OPM still lacks a functional system to protect private data held by what is effectively the largest human resources department in the world.

"It's time to bring in the nerds," he added.

But J. David Cox Sr., president of the American Federation of Government Employees, put part of the blame on Congress for failing to adequately fund OPM. "Firing one individual solves nothing," he said.

Here is how much money OPM has spent (or, in the case of 2015, is budgeted to spend) in the past nine fiscal years (billions of dollars):

The J. David Cox Sr. quoted by the AP's Lederman cannot be serious. OPM's spending rose by almost $29.5 billion, or 50 percent, from 2007 to 2014 — a compound annual increase of 6.0 percent. As seen in the $5.8 billion difference between budget and final spending, OPM couldn't even figure out how to spend all of the money Congress was allocating.

Mr. Cox is insulting our intelligence by expecting us to believe that OPM didn't have the money and resources it needed to keep its data secure, one of its obviously most important duties. That's utter horse manure.

Speaking of failures to vet, the AP's Josh Lederman all too predictably failed to fact-check Cox's cockeyed claim. Apparently getting a false meme about supposedly inadequate spending out in time for the evening news was far more important than the truth.

All in all, these two memes — the Republican minority's alleged culpability for failing to vet a presidential nominee the vast majority of them opposed (the vote on her nomination was 62-35, with all "nos" coming from Republicans) and supposedly inadequate funding — are so stupid (there really isn't a better word) that they might test the limits of even low-information voters' gullibility.