In a column at ForeignPolicy.com, a former Obama administration defense official who "served as a counselor to the U.S. defense undersecretary for policy from 2009 to 2011" has asked: "Can Gay Marriage Defeat the Islamic State?"

Rosa Brooks, who "is a law professor at Georgetown University," is serious. Her earnestness and deep ignorance are especially troubling, because it's clear that there are many people who "think" just like her who are still in the Obama administration and at the State Department (See: John Kerry's slow-motion sellout in Iranian negotiations).

Here's how Brooks begins her babbling (bolds are mine): 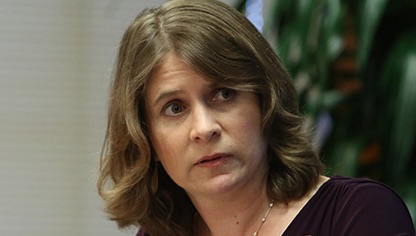 I was thinking about two sets of images this morning: one from an Islamic State-controlled city in Iraq, the other from the steps of the U.S. Supreme Court in Washington, D.C.

The first set of images, from early June, shows masked gunmen surrounding a crowd of people, mostly men. Some of the faces in the crowd show fear or hatred; others are studiously blank. But all eyes are fixed on the rooftop of a nearby building, where a blindfolded man is dangling upside down, his ankle held tightly by another masked man. Next image: The blindfolded man’s body plummets headfirst toward the pavement below. Final image: a crumpled, bloody heap on the ground, surrounded by a sea of faces. Headline and caption, from Fox News: “ISIS conducts more executions of men for being gay ...

... The second set of images shows another crowd, thousands of miles away from the first. This crowd is full of men and women, all ages and all races, and they’re waving American flags and rainbow-colored flags.

More to the point, it isn't just that she's serious. Especially given her background, and the likelihood that many people with whom she worked in the government "think" as she does, she's dangerous:

Do you want to fight the Islamic State and the forces of Islamic extremist terrorism? I’ll tell you the best way to send a message to those masked gunmen in Iraq and Syria and to everyone else who gains power by sowing violence and fear. Just keep posting that second set of images. Post them on Facebook and Twitter and Reddit and in comments all over the Internet. Send them to your friends and your family. Send them to your pen pal in France and your old roommate in Tunisia. Send them to strangers.

... Yes, it’s sappy. But this has always been the dream of America: a dream of freedom, of a land where no one would force their religious beliefs on anyone else. A land where all people would have the unalienable rights to life, liberty, and the pursuit of happiness. A land where we could seek change peacefully and trust our laws and institutions to respond to our deepest hopes.

... And I still have faith that this dream is the one that will prevail, in the end. That’s the lesson of history: Brutality and fear can keep people down for only so long. The Nazis learned this; the Soviets learned it; the Ku Klux Klan learned it; Pol Pot learned it; the Rwandan génocidaires learned it.

One of these days, the Islamic State and al Qaeda will learn it too<.

If Brooks really believes that everyone involved in the Rwandan genocide "learned it," she's beyond help.

The Nazis "learned it" because of military force. Millions of good people had to die to deliver the lesson, because too many people didn't recognize the Nazi threat until it was almost too late. The Soviets "learned it" because Ronald Reagan, Pope John Paul II and Margaret Thatcher stood in unison for peace and freedom through strength — a position which Brooks and the administration in which she formerly served clearly do not hold. The KKK "learned it" because of intensive law enforcement efforts and judicial punishment.

To borrow from Tina Turner, what's "love" got to do with any of this?

ISIS would hack off Rosa Brooks' head in a New York minute if given the opportunity — and I'm pretty sure that #LoveWins hashtag signs and pictures of people celebrating same-sex "marriage" wouldn't save her.

The delusion is extraordinarily strong, prolonged — and, as noted, acutely dangerous — in this one.