Marlow Stern at the Daily Beast, who reviewed Jurassic World on June 10, must be absolutely furious.

The Steven Spielberg-produced movie just had "the highest-grossing opening weekend of all time." Not bad for a film Stern panned as "A Big, Dumb, Sexist Mess." — with heavy emphasis on the "sexist" part.

The mind of Marlow Stern is thoroughly upset with JW's "backward sexual politics." That's funny. I thought movies had "plots." Here are a few paragraphs illuminating his outrage (mild profanity censored; bolds are mine): 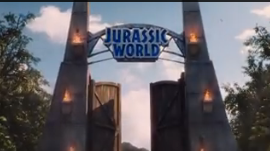 ... Jurassic World is not good. In fact, it’s aggressively bad.

... Jurassic World is not about corporate greed, anti-militarization, crass commerciality, disrupting the food chain, or dinos eating the sh** out of people. No. It’s about a woman’s “evolution” from an icy-cold, selfish corporate shill into a considerate wife and mother.

... Despite credits and promo materials that state otherwise, the main character of Jurassic World is not the swashbuckling, macho, ex-military Velociraptor trainer Owen Grady, played by Pratt. It is Claire Dearing (Bryce Dallas Howard), the park operations manager. Claire is so careerist, unfeeling, and apparently “unmaternal” that she clacks her heels around barking orders in bangs and a white pantsuit, and when her two young nephews (Nick Robinson, Ty Simpkins) arrive on the scene, she’s so buried in her work mobile that she shoos them away.

... the film turns into a bizarre twist on George of the Jungle. As Claire and Owen travel through the dino-infested rainforests in search of the missing children (the nephews — Ed.), he begins to loosen her up through good ol’ fashioned sweet-talkin’. For God knows what reason, Claire is still sporting her work blouse and heels and is very much the distressed damsel, but what do you know, after a few witty barbs he convinces her to roll up her sleeves and tie her shirt in a bow. More sweaty forest shenanigans, and she loses the shirt. And then the heels. Once they’ve emerged from woods, and after avoiding certain death several times, she’s born again: a sweaty, humorous, maternal woman who’s severed her ties to her job and is only concerned with saving her two boys. Oh, and she’s got a man, too.

... we’ll spare the spoilers ... (but) Suffice it to say the climax and conclusion of the film really hammers home the unsettling “path to motherhood” journey.

Oh my gosh, we can't have that. I mean, so-called "career women," as their biological clocks relentlessly tick away, never, ever make such a transition, though obviously in less dramatic circumstances, in real life. And heaven knows, we already have a severe and absolutely dangerous overabundance of considerate wives and mothers. (That's sarcasm, folks.)

I have not seen the movie, so Stern may be correct that Claire's transition is clumsy and not credible.

But I don't need to have seen the movie to know that it's the mere employment of such a plot, and not its execution, which has Stern up in arms. He clearly said so in his closing paragraph, using predictably PC language:

Femininity is, by and large, a social construct. And in 2015, to “embrace” one’s “femininity” doesn’t have to mean choosing motherhood and a man over a successful career. We’ve moved past that. We’ve evolved.

We've moved so far "past that" tired femininity thing that there's no longer a cosmetics industry. Lingerie is a relic of a bygone era. Perfume and jewelry are gone. Oh, wait ... they're not? Oh, sorry about that.

Additionally, unless he's seen a script for the inevitable Jurassic World II, Stern doesn't know whether Claire has totally given up her professional ambitions. Maybe she's merely decided that being a park operations manager in a place where the customers end up being food for the animals isn't a particularly noble endeavor.