The Associated Press and Stephen Braun did all they could to cover for the Clintons yesterday.

First, the wire service attached the most boring headline imaginable to Braun's story about Bill Clinton's shell company shenanigans: "Bill Clinton company shows complexity of family finances." The message to subscribers, particularly the broadcast networks: "This is boring and time-consuming. Don't waste your time reading this, let alone using it." As Scott Whitlock at NewsBusters noted early this afternoon, "All three networks on Wednesday ignored the latest questions to hit the Clintons and their foundation." So if there was a strategy, it worked. Braun's story was seemingly designed to induce a MEGO (my eyes glaze over) reaction: 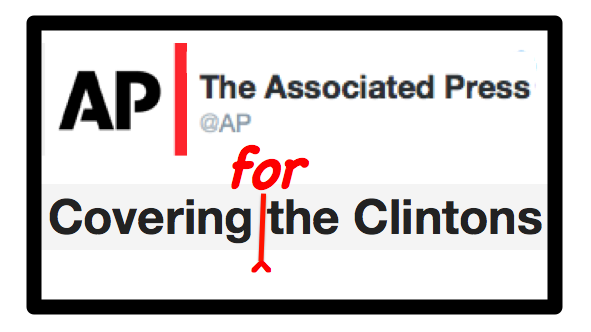 The newly released financial files on Bill and Hillary Rodham Clinton's growing fortune omit a company with no apparent employees or assets that the former president has legally used to provide consulting and other services, but which demonstrates the complexity of the family's finances.

Because the company, WJC, LLC, has no financial assets, Hillary Clinton's campaign was not obligated to report its existence in her recent financial disclosure report, officials with Bill Clinton's private office and the Clinton campaign said. They were responding to questions by The Associated Press, which reviewed corporate documents.

The officials, who spoke on condition of anonymity because they were not authorized to provide private details of the former president's finances on the record, said the entity was a "pass-through" company designed to channel payments to the former president.

Under federal ethics disclosure rules, declared candidates do not have to report assets worth less than $1,000. But the company's existence demonstrates the complexity of tracking the Clintons' finances as Hillary Clinton ramps up her presidential bid.

... Under federal disclosure rules for spouses' earned income, Hillary Clinton was only obligated to identify the source of her spouse's income and confirm that he received more than $1,000. As a result, the precise amounts of Bill Clinton's earned income from consulting have not been disclosed, and it's not known how much was routed through WJC, LLC.

AP's message to subscribers: "There's nothing here. We had to do something with this, so we did. But you shouldn't."

And what's this garbage about "no precise amounts"? There are no amounts at all!

Perhaps those amounts might be identified if the Clintons release their tax returns going back to 2008, when the first of these shell companies was formed. What are the chances of that? More than likely they'll release their 2015 return, which will contain no such items, and perhaps 2014, if it's also "clean" (since Mitt Romney released his for 2010 and 2011), and then declare that they don't need to do anything else.

Braun's reportage contains no evidence that he or any other AP reporter asked anyone with Team Clinton why WJC LLC even needed to exist.

As insurance, it appears that the wire service did not describe or post a link to Braun's story on Twitter. Surely many subscribers rely on the wire service's Twitter feed to be complete in lieu of reading every word of every dispatch appearing on the Internet. But a word search on "Clinton" on the past 60 hours of the AP's twitter feed found no mention of the 25 hours-old story.

I'm sure it's just an oversight (/sarcasm).

The AP is on quite a negative roll this week.

Here's a three-item sample, all from the past two days: First, an AP reporter declared that if Obamacare subsidies in states without their own health insurance exchanges are declared illegal by the Supreme Court — reflecting the actual words and the clear intent of the law's drafters at the time — Republicans face "ugly" fallout, even though not a single GOP congressman or senator voted for the Affordable Care Act; second, a pair of AP reporters had a difficult time understanding how large-company CEOs who are responsible for preserving and growing multibillion-dollar enterprises can possibly be getting paid as well as elite entertainers, TV personalities and rock stars; and finally, the wire service told us that "Islamic State Membership Has Its Privileges."

Now there's this. As Instapundit's Glenn Reynolds observed in connection with a separate matter Tuesday morning, "they (the AP and the establishment press in general) are serving as palace guard, not as press."