The headline is already gone from the Associated Press's national site, but it's still present elsewhere.

In the context of events in Ferguson and elsewhere since August of last year, one could argue that it contains more truth than the wire service and the headline's accidental creators will ever admit.

Here it was, while it lasted, at the AP's national site:

Gosh, haven't the President and especially his just-departed Attorney General Eric Holder and the Department of What Used to Be Justice done enough?

Here are headline and the related content of the item, which was still present as seen below at ABC News's web site as of 7 p.m.:

ABC has since changed the headline (it's now "Latest on Police-Custody Death: Looting Where Riot Began") and updated its story, telling us that rioters have been allowed to trash a mall (bold is mine):

People are looting stores at a mall where the riots in Baltimore started. 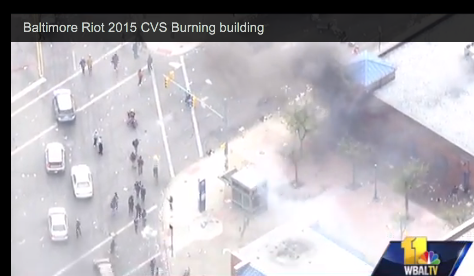 As police moved away from the mall into a nearby neighborhood, the mall became unprotected and people started carrying clothes and other items away.

Cars have been burned, other stores have been looted and a pharmacy caught fire during the mayhem. The riot started hours after Freddie Gray was buried.

Well, at least it's "people" now, and not (cough, cough) "protesters."

So the rioting continues, arguably the logical, you-reap-what-you-sow result of coddling grievance-mongers for over eight months and failure by a city to carry out its most fundamental duty: protecting lives and property.