At Mason High School in Ohio this past week, the school's administration originally supported but has now cancelled a "Covered Girl Challenge." The goal, according to a school email captured in full at Jihad Watch and almost nowhere else, was to "celebrate ... diversity and promote open mindedness" by promoting the Muslim Student Association's invitation to "all female students to ... wear a headscarf for the whole school day."

Jihad Watch, unlike every Ohio-based establishment press outlet report I have seen, including one found in the Cincinnati Enquirer, also linked readers to a reminder that collegiate chapters of the Muslim Student Association, which also encourages the creation of high school chapters under its aegis, have served as breeding grounds for terrorism (bolds are mine throughout this post):

The MSA bills itself as a resource and support group, a place where Muslim students can network and help grow the association.

Terrorism expert Patrick Poole, however, told CBN News his investigation of the organization shows it's being used for another purpose.

"The Muslim Students Association has been a virtual terror factory," said Poole. "Time after time after time again, we see these terrorists -- and not just fringe members: these are MSA leaders, MSA presidents, MSA national presidents -- who've been implicated, charged and convicted in terrorist plots."

The roll call includes Anwar al-Awlaki, the al Qaeda cleric linked to terror plots from Fort Hood to Times Square and beyond.

The Enquirer's Hannah Sparling bought the administration's line that it would have all been okay except for the their choice to get behind it: 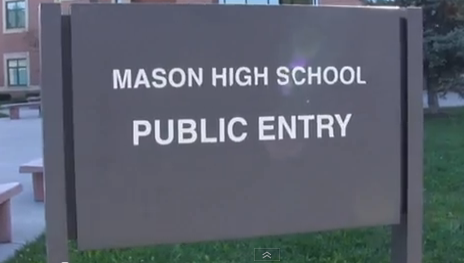 The challenge was student-led rather than school-sponsored, but an email promoting the event came from a school account.

That should not have happened, McCarty-Stewart said, adding that MHS will put policies in place to ensure school accounts are only used for school-sponsored events.

Really, that's where school officials tripped up, said district spokeswoman Tracey Carson. "The key there is, it's student-led and student-driven," she said. "In this case, I think, honestly, where we messed up is because adults got too involved in this process."

It's quite likely that a "(very few) student led" challenge would have gone nowhere without the school administration's explicit blessing. Once that occurred, Robert Spencer's question at Jihad Watch logically kicked in:

Actually, Robert, it appears to be only radical Islam which gets this treatment. I write that because female "covering," which has turned into a violently enforced requirement in many Muslim nations, is a relatively recent phenomenon in at least some of them.

I was shaken into recognizing this when an emailer sent me a photo from the early 1960s several weeks ago (originally found here):

The caption should also have referenced the Soviet Union's invasion of the country, but the point is made: It seems that many people in countries where the Muslim religion was clearly being practiced were comfortable operating in a more secular framework until roughly the time when Islamic fundamentalists overthrew the Shah in Iran (thanks, Jimmy Carter). It thus seems fair to claim that Mason High's "Covered Girl Challenge" was an exercise in making radical fundamentalist Islamic practices more acceptable — and the district got duped.

So did the Enquirer's Sparling:

Even afterward, though, the episode and arguments illustrate the fault lines in Greater Cincinnati - and the U.S. - over where cultural awareness ends and promoting a religion begins. And where avoiding controversy ends and turns into bigotry.

"This is ridiculous!!" read one email sent to Mason that the Enquirer obtained under a public records request. "You're spending our money to support Sharia and Islam..."

"There is absolutely no reason to do this," read another. "Stop trying to down play the horrible thing (SIC) that have occurred in this nation at the hands of Muslims."

But for Shakila Ahmad, her first reaction when she heard about the response to the hijab challenge was disappointment.

"You know what? I really thought we were a better community than this," said Ahmad, a Mason resident and president and board chair for the Islamic Center of Greater Cincinnati. "To let ourselves be bullied and intimidated, to cancel something whose whole objective was to build understanding is extremely disappointing."

Ahmad doesn't wear a hijab herself, but she has respect for those who do, she said.

And, while she hasn't heard specifically of the "Covered Girl Challenge," the concept is common, she said.

"It's purely allowing people to experience a diverse perspective," she said, "and to really build understanding of what a fellow community member, a young person in my same community, might be experiencing."

So it's apparently legitimate to call those who called for the "Covered Girl Challenge" to be cancelled bigots and bullies, and not the people whose view of their religion dictates covering and otherwise oppressing girls and grown women — including Ms. Ahmad, if she happened to reside in an affected nation — whether they like it or not. Got it.

Here's yet another reason why, as I have noted on other occasions, I won't subscribe to the Cincinnati Enquirer even if they deliver it to my door every day on a silver platter.