It's more than fair to wonder why the Associated Press waited until 9:41 p.m. ET Tuesday evening to recognize the existence of Lena Dunham's most recent problems with the truth.

The AP's first recognition of the days-old story came roughly two hours after Dunham's first detailed response to convincing allegations that the account in her most recent book of being raped in college by someone named "Barry" can't possibly relate to any real human being here on earth. The AP's delay, and the slovenly and deceptive unbylined report, opens the wire service up to allegations that it has chosen to participate in a coordinated attempt to pull Dunham's keister out of the fire.

Dunham finally "spoke out" Tuesday night at BuzzFeed. The star of HBO's "Girls" now says that "Barry" is a pseudonym.

The problem is that she flagged a name used earlier in her book as a pseudonym but didn't do the same with "Barry." A guy really named Barry who also attended Oberlin College when Dunham was there has now become an object of suspicion, even though the real Barry doesn't fit Dunham's detailed description of him, his interests, his job, or his clothing. The real Barry has reportedly spent a considerable amount on legal fees in an attempt to get Dunham and Random House, the book's publisher, to do the right thing.

As the AP story's first two paragraphs reported, Random House, the book's publisher, has issued a "clarification" (bolds are mine throughout this post):

PASSAGE ON ASSAULT TO BE CLARIFIED IN DUNHAM BOOK

A section from Lena Dunham's "Not That Kind of Girl" that recounts an alleged assault while she was in college is being changed to make clear that the assailant's name is a pseudonym.

Random House announced Tuesday that both the digital edition and future print editions of Dunham's best-selling memoir will include the clarification. The book already included a disclaimer saying that some names and details had been changed, but did not say precisely that "Barry" was not the real name of Denham's alleged assailant.

AP stops just short of declaring the whole problem the fault of readers, whom they apparently expect to be endowed with telepathic powers for determining whether "Barry" and other named characters in Dunham's book are part of the "some names" which have been changed.

Dunham's BuzzFeed dreck, in which she attempts to play a full hand of victim cards, is virtually unbearable, especially so in the following sentences: 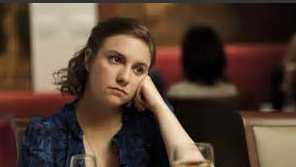 (2nd paragraph) Speaking out was never about exposing the man who assaulted me.

(6th paragraph) But I hoped beyond hope that the sensitive nature of the event would be honored, and that no one would attempt to reopen these wounds or deepen my trauma.

(7th paragraph) Reporters have attempted to uncover the identity of my attacker despite my sincerest attempts to protect this information. My work has been torn apart in an attempt to prove I am a liar, or worse, a deviant myself.

Dunham expects us to believe she is so dense that she didn't anticipate that exposing specific details about a "Barry" people had every reason to believe was really named "Barry" wouldn't lead people like John Nolte at Breitbart to try to find him. Here's some of what Nolte found instead:

Dunham drops ... specific clues about the identity of the man she alleges raped her as a 19-year-old student. Some of the details are personality traits like his being a “poor loser” at poker. Other details are quite specific ...

3. Barry was the "campus's resident conservative."

6. The incident occurred in winter.

7. The incident occurred just before Barry graduated in December of that same year.

8. Barry was a "mustachioed campus Republican" with a "mustache that rode the line between ironic Williamsburg fashion and big buck hunter."

10. Barry had a voice "that went Barry White low."

To be sure we get the point, on three occasions Dunham tells her readers that her attacker is a Republican or a conservative, and a prominent one at that -- no less than the "campus's resident conservative."

This recitation of the facts makes the AP's following summation of the situation absolutely outrageous:

Breitbart reported that Dunham had an Oberlin classmate named "Barry" but neither he nor anyone else fully matched the description Dunham gave in the book.

This is a classic example of a sentence which is technically true, but which communicates a lie. The real Barry's only resemblance to the mythical "Barry" is his first name and perhaps his age. Virtually everything else in Dunham's "description" of "Barry" doesn't describe the real Barry.

What we're left with is a woman who appears to despise Republicans and conservatives so much that she was willing to invent details surrounding the circumstances of her rape — or, potentially even worse, to totally invent a story of rape — to discredit and smear those who disagree with her politically and socially.

There's one more point I find quite compelling.

Breitbart's Nolte accurately described Dunham, in terms of her social influence and visibility, "as one of the most powerful and influential women in America."

Let's combine that assessment with this garbage from Dunham's eighth BuzzFeed paragraph:

But I simply cannot allow my story to be used to cast doubt on other women who have been sexually assaulted.

Listen up, Lena. Your fabricated story has arguably done more "to cast doubt on other women who have been sexually assaulted" than a thousand real everyday misogynists could accomplish in their combined lifetimes. For years, people involved in rape investigations are going to be saying "I hope we don't have another Lena Dunahm on our hands" under their breath. That is all on you, dear.

The Associated Press, which has from all appearances allowed itself to be co-opted in Dunham's defense, has also done its part to "cast doubt on other women."

The message here is that the AP and the establishment press will side with the rich, powerful and politically correct in virtually any circumstance. In many rape situations, the rich and powerful person happens to be the rapist. Tragically, rape victims now have every reason to believe that if their attacker is a powerful community member with the right political connections, they'll get no sympathy from the news media. Many of them will stay silent.