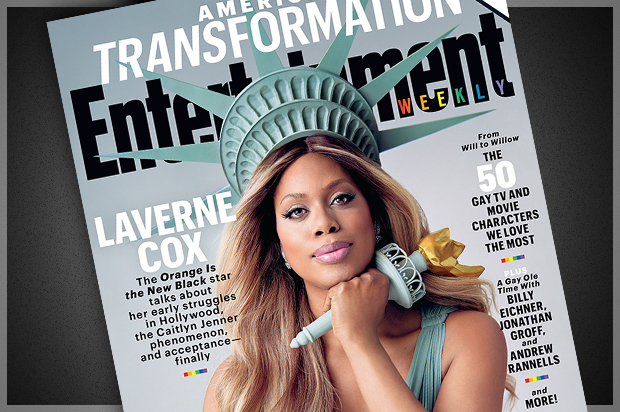 Entertainment Weekly put transgender actor Charles "Laverne" Cox dressed as the Statue of Liberty on its cover for the June 19 issue, a "special LGBT issue." The unsubtle message over his head was "AMERICA'S TRANSFORMATION." (Italics theirs.)

Inside the cover story came with a gooey headline: “Lady Liberated: Laverne Cox is the most famous transgender actress in America. She might also be the most enlightened woman in Hollywood. Now she’s just waiting for the rest of America to catch up.”

EW writer Melissa Maerz began with gush that "Laverne Cox is the most famous transgender actress in America. That's the best job she can imagine. It might also be the hardest."

...she’s the public face for transgender America. And she’s grateful for that. “I just wonder,” she says, “am I allowed to be a human being?”

To be fair, Cox isn’t just a human being. She’s an icon. Walking into the NoMad bar in New York dressed in black, wearing oversize sunglasses and swinging a Gucci handbag behind her, she’s nearly seven feet tall in heels, her hair swept into an elegant updo. People turn their heads as she sashays by. She speaks and moves with the grace of a movie star from a bygone era, and yet she’s never anything less than real.

The entire story is propaganda-perfect, by the book – the GLAAD handbook. There’s no mention “she” used to be named Charles. There’s no one who doesn’t think Cox is super-fabulous, and there’s absolutely no one who has an opposing point of view on transgender ideology.

The closest the story gets is Cox crying over fake “shame” exercises before she appeared on the red carpet, with make-believe critics saying”Who do you think you are to be walking the red carpet? You’re a man. You’re nothing.”

The “conservative” backwards people in the story may be the liberal reporters who’ve asked the “wrong questions” according to the GLAAD Handbook rules.

....it's hard to believe she's never given the wrong answer. When CBS This Morning host Gayle King insisted that Cox was "born a boy," Cox patiently corrected her, noting that she was "assigned" a male gender at birth. When Katie Couric asked about her genitalia, Cox calmly explained that the preoccupation with surgery objectifies transgender people.

The cover story ended with a transparently ridiculous conclusion: that Cox is on the cover for some other reason than her “pioneer” status in sexuality:

Maerz concluded lovingly: “She’s right. That’s exactly why she’s on the cover. We don’t just care about the most famous transgender actress in America. We care about Laverne Cox.”

But that wasn't the end of the transgender propaganda. Then came an article headlined “The Transition Will Be Televised: In an era of increasing inclusiveness, TV proves once again to be media’s most effective agent of social change, this time by sharing rich stories about the transgender community.” (Bolding in the original.)

The author is Mark Harris a former editor at EW and...the spouse of gay Marxist playwright Tony Kushner. Now that transgenderism is hot enough to draw a magazine cover, it would be rude to imagine it's faddish:

We are, in other words, right on the verge of a network meeting in which the producer of a new series says, "What about a trans character?" and the executive replies, "Oh, that's so last year." Congratulations, trans Americans - you are now pop culture's flavor of the month.

Before we continue, let’s agree that it’s a hideous phrase to apply to any group of human beings. As dehumanizing as it is to obliterate an often misunderstood minority by excluding it from the pop cultural landscape altogether, it’s scarcely better to commodify a whole set of diverse individuals by treating them as a cool product for consumers of mainstream culture who are window-shopping for the next “edgy” thing. Invisible yesterday, here today, old-hat tomorrow is a terrible formula. And also a familiar one.

But there’s reason to hope that TV’s sudden interest in trans people is not just the brief flare that portends a quick flameout, but a necessary step toward more enduring inclusiveness. One thing that pop culture has always done very well is to get very interested in something all at once. And no medium does that more effectively than television. The delivery system itself is about reliability, familiarity, and predictability. And when the TV hive mind decides to invest in something – as it did in gay characters 20 years ago – it will do its best to make sure you get invested too. That’s what’s happening right now for, and to, Americans who identify as trans. (Though the number is shaky, the current best guess is about 700,000, roughly the population of Seattle or Detroit.)

The pull quote was "A large part of why trans characters are on television is specifically to promote understanding." (Emphases in the original.)