Time Hailed 'The Ferguson Protesters,' But Saw Doom for the Tea Party At End of 2010

The year-end issue of Time magazine includes an enormous article on “The Ebola Fighters,” their Persons of the Year, but there are also five pages on “The Ferguson Protesters: Their refusal to let a life be forgotten turned a local shooting into a national movement.” (Time touted these leftists as winning their online poll.)

Four years ago, Time made “The Tea Party” a runner-up, but they were projected to fall apart. The headline was “The grass-roots uprising that restored the GOP was fueled by anger at the ruling Democrats. But it won’t be easy to hold together.” Oops, conservatives helped the GOP win again in 2014, so Beatles-breakup metaphors sound a little silly.

Alex Altman’s story hailing “A New Civil Rights Movement” went very light on the “Ferguson Rioters,” which might be an embarrassing and/or politically toxic part of the Left. But it took 11 paragraphs to arrive there, on the story’s last page. Paragraph three used a strange fire metaphor:

“An unarmed black man shot dead by a white cop is a tragedy, but a recurring one; the uproar can fizzle as fast as it flares. There was no reason to think Michael Brown’s death on Aug. 9 was destined to be different. But Ferguson was the spark that started a fire.”

Altman never touched the fact that it’s much more common for a young black man to be shot dead by another young black man. The protests here hailed for their seriousness and historical sweep: 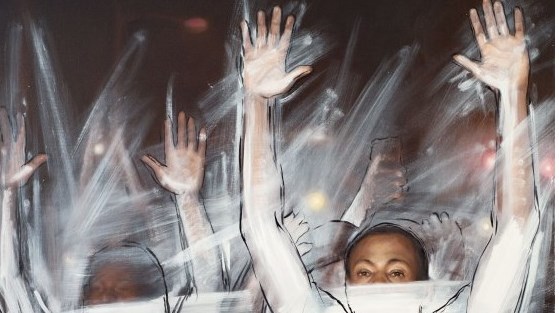 Protest is a performance that can make the unseen visible. In this angry epic, thousands found a role. They clogged freeways in Miami and Chicago, carried coffins across the Brooklyn Bridge, clashed with cops in Berkeley, Calif., flooded streets in London and toted signs around Tokyo. At colleges from Boston to Baton Rouge, students staged “die-ins” to dramatize the social value of black life. Players for the St. Louis Rams took the field with their hands raised in solidarity—a gesture repeated on the floor of Congress....

This outcry was better focused than Occupy, bigger than the one that followed the Trayvon Martin case. But like the reaction to Martin, it felt raw and real. The expressions of powerlessness that began on a Missouri sidewalk soon seeded the hopes of the powerful. “What happened in Ferguson,” Attorney General Eric Holder tells TIME, “could be one of those seminal moments that transform the nation.”

Only then did it turn to people who favored the rioting:

Some, like Dhoruba Shakur, a 24-year-old jazz drummer in a Black Souljahz hoodie, saw in Brown’s death and the police reaction a justification for lawlessness. “It was kind of beautiful,” he says of the looting. “These people are being failed by the U.S. government.”

Altman had one paragraph of asking the tough questions about riots, and the viewpoint of the police, before returning to the implication that the “real” protesters were the poets who protested without burning down a pizza parlor:

But to many, it was hard to square the anger with the Molotov cocktails whistling through the night, the small businesses destroyed, the images of torched cop cars. Police perform a service that is difficult and dangerous; now they were being asked to maintain order in a hostile community where any wrong move would instantly inflame. The demonstrations divided the country into warring camps: Did blame rest with the officers pumping tear gas into the streets or the protesters who provoked them?

When the chaos subsided and the television trucks scattered, the work of sustaining the struggle fell to activists like Elzie. They are poets and paralegals, college students and working professionals, some affluent, some unemployed, white as well as black. They launched crowdfunding campaigns, organized council meetings and held a mock trial for St. Louis County prosecutor Robert McCulloch at the courthouse where Dred Scott once sued for his freedom. They continue to preach morning and night on Twitter, the revolutionary’s pocket pulpit.

Altman glorified activist Deray Mckesson, who said “We will not be silent anymore in the face of oppression...Silence can so easily look like comfort.” Protester Johnetta Elzie spat at Altman’s idea that they’ve “alienated sympathizers” with rioting.

These are the sounds, activists say, of a new civil rights movement—a battle to reshape the relationship between the police and the people they are paid to protect. What started in a Missouri suburb may end with change that can be measured in lives saved.

That can happen only after the messy fight to make enemies into allies. The unruly protests have called a nation’s attention to a problem some thought had been solved and others didn’t want to acknowledge at all. But they have also alienated sympathizers. “It’s not my job to convince them,” Elzie says of those who used the looting to discredit the protests. “You’re mad over a building? We’re mad over a body.”

This was not listed as “offensive” and there no “frothing foam” of extremism. There were no “wave-riding hucksters” or fringy cable hosts in the movement. (Al Sharpton, anyone?)  Then look at David von Drehle’s Tea Party article at the end of 2010:

The eye-catching aspects of the Tea Party movement were the folks with tricornered hats and the occasional offensive hand-painted sign and the wave-riding hucksters in various guises, from bumper-sticker salesmen to patriotic songwriters looking for fame to the Tea Party's weepy master of ceremonies, Glenn Beck. Such spectacles were mostly foam, frothing on the surface. Down deep, forces like populism, libertarianism and skepticism of government — throw in some cultural conservatism and a dash of antielitism (and, according to Tea Party critics, some measure of residual racism) — created the swell that swept over American politics in 2010, inundating congressional Democrats while battering the Republican establishment.

There were no Tea Party riots, no family businesses burned to the ground. But there were defined by the "occasional offensive hand-painted sign."

The Tea Party were oddly compared to the Beatles, only to suggest some libertarian Yoko would split them up:

Smashing success broke the Beatles apart. As 2010 closes, there is no bigger question in U.S. politics than whether the Tea Party will go the same way. The pressures on this already divided movement will be enormous. As long as the far-flung elements of the Tea Party were shoulder to shoulder against Obama, it was easy to keep them together. But now, the party that argued so effectively for smaller government is headed to Washington, where so many other waves have broken and receded. Having remade Congress and with a GOP presidential nomination up for grabs, the Tea Party is about to learn that rallying against its enemies is easier than choosing among its allies. The Tea Party victories didn't magically heal the age-old divisions of the right.

That's only the beginning. next spring, Congress will have to decide whether to raise the federal debt ceiling. Increasing it would gall a lot of Tea Party voters, but the alternative would likely involve a government shutdown like the one that proved disastrous for Republicans in 1995. 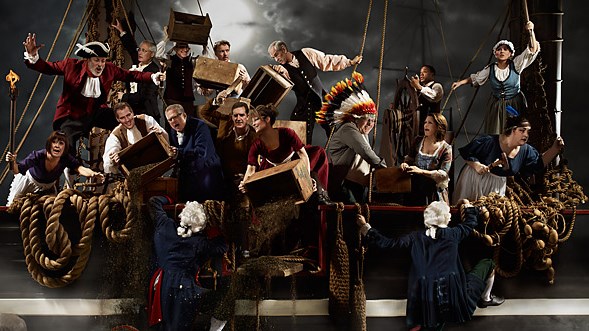 While the 2014 Ferguson article had a sensitive painting of black protesters were their hands up, the 2010 package had what they no doubt thought was a humorous Photoshopped montage of the Tea Party on a Boston ship in Revolutionary War garb. They included losing conservative candidates Sharron Angle and Christine O’Donnell and Von Drehle wrote about “pretty kooky candidates in high-profile races”:

And keep this in mind: Tea Party energy was a key ingredient in the Republican landslide of 2010 — but that doesn't mean the GOP establishment is rooting for the movement's continued success. Folks waving flags marked "Don't tread on me" tend not to be team players. Tea Party–backed candidates knocked off veteran Republicans in primaries in every part of the country, from Alaska to Florida, Delaware to Nevada. This purge mentality left the GOP with some pretty kooky candidates in high-profile races and probably cost conservatives an even broader victory.

Von Drehle concluded with one last note on their impending crackup: “The Tea Party is a hot brand, but there's no one in power to enforce the trademark. Now that the bailouts are history and Democratic hegemony is broken, what does it stand for? It's a sign of the incredible velocity of politics these days that the colossus of 2010, a movement not even two years old, is already facing an identity crisis.”

How did "The Ferguson Protesters" move the electoral needle? It could be argued that they helped elect Republicans in 2014. It could be argued they're so extremist they think Al Sharpton is the face of the Establishment. Beyond the one throat-clearing paragraph, Altman never wanted to explore how his "new civil rights movement" could be a boon to Republicans.