The Drudge Report noticed the New York Times suggested a new leftist documentary honoring Edward Snowden “Tests Hollywood Obama Backers,” as in Harvey Weinstein, who often promotes his films by taking them into the Obama White House for a screening. Probably not this time! Michael Cieply reported in the Times:

“As I saw the promise of the Obama administration betrayed, and walked away from,” says Mr. Snowden, referring to drone strikes and invasive monitoring by the National Security Agency, “it really hardened me to action.”

But do some of President Obama’s staunch Hollywood supporters share his sentiment? 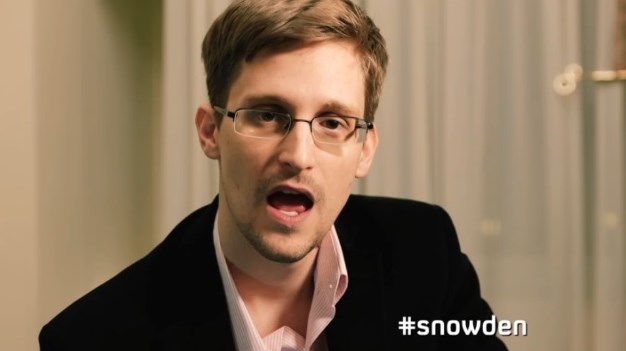 Her provocative, and deeply admiring, look at Mr. Snowden — which had its premiere at the New York Film Festival on Oct. 10 — arrived here this week amid high hopes, intense curiosity and more than a few raised eyebrows over its sharp critique of Mr. Obama, a president who has enjoyed strong support in the movie world.

The intrigue is especially pitched because several of the companies behind “Citizenfour” — which takes issue with Mr. Obama’s expansion of Bush-era surveillance, and his administration’s attempt to prosecute Mr. Snowden for espionage — are led by some of the president’s close political allies.

They include Harvey Weinstein, the Weinstein Company’s co-chairman, as well as Jeff Skoll, the founder of Participant Media, and Richard Plepler, the chief executive of HBO, who all have been major contributors to Mr. Obama’s political campaigns.

Cieply reported that "Citizenfour" is already high on the buzz list for a Best Documentary Oscar, but that Weinstein has been uninvolved:

On Tuesday, it was the Radius-TWC co-presidents, Jason Janego and Tom Quinn, and not Mr. Weinstein, who played host as Ms. Poitras introduced “Citizenfour” to film buffs and some potential Oscar voters at the Los Angeles County Museum of Art.

“The film is certainly about the danger of N.S.A. surveillance, but it’s also really about courage,” Ms. Poitras said. (The movie's title comes from Mr. Snowden's self-designated code name when he began communicating with Ms. Poitras.)

....Mr. Skoll, through a Participant Media spokeswoman, declined to comment when asked whether he had concerns about the film’s view of Mr. Obama. In an email, referring to Mr. Quinn and Mr. Janego, of Radius-TWC, Mr. Weinstein said: “This is Tom and Jason’s show. They have autonomy, and it’s all their call.”

Sunday's Washington Post offered a more conventional Snowden-sympathetic story by Steve Dollar. Neither one of these articles ever identified Snowden and his supporters as on the left, let alone the radical left that sees Obama some kind of Pentagon puppet.

Both the Post and Times contain the argument that somehow this film allows the viewer to make up their mind about Snowden. But it seems obvious that Poitras is a huge, mouth-breathing fan of Snowden, and completely in sync with his sourly radical take on America's military-industrial complex:

“There’s a conversation when Glenn [Greenwald] talks to Snowden about coming forward, and the camera goes back and forth, and I actually didn’t remember I filmed that, and for me it’s the most powerful scene in the film,” said Poitras, 52, a poised figure in jeans and a black jacket that would allow her to blend into any Manhattan crowd. In the scene, Snowden insists he will go public as the source of the NSA leaks that the journalists will release regardless of the consequences. It’s a palpably electric sequence, which would be the core of any fictional drama. In this case, though, the action is perilously real, and the camera isn’t only capturing a historical event, it’s part of the making of it. 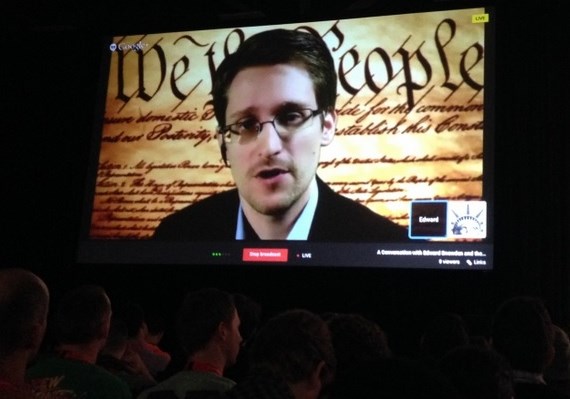 “The choice that he’s making could end his life,” Poitras said. “I’ve worked in war zones with bombs going off, and I know, ‘Okay, that’s the moment.’ I know that’s the one where all the emotion is contained. In this case, my brain, whatever those defenses were, just blocked it out. I felt we were in a state of free fall, not knowing what kind of landing we’d encounter.”

“They look at flight manifests,” she said. “The intelligence communities knew by that point. But I think one of the reasons the story had the impact it had is Glenn worked at a really fast pace. The U.S. government couldn’t respond in time. We caught them a bit on their heels. They didn’t expect Snowden would reveal his identity, so we controlled the narrative for a while.”

“She is taking on the most powerful nation in the world and has been repeatedly targeted for doing so,” said Jeremy Scahill, a co-founder with Poitras and Greenwald of the Intercept, an online investigative journal, and writer-producer of the Academy Award-nominated documentary “Dirty Wars.” “This boils down to the power of one woman’s camera against the entire national security state.”

The word "radical" only comes into the Post story as an accusation against the U.S. government under Obama, not Snowden but the people who object to Snowden:

“I make films about people,” Poitras said. “I don’t know if films about people change policy. I would hope that our elected officials would respond in terms of increased transparency and accountability for these actions, and not just around surveillance but other things like drone strikes. The government has moved in directions that are pretty radical. The level of secrecy that we have is very frightening.”