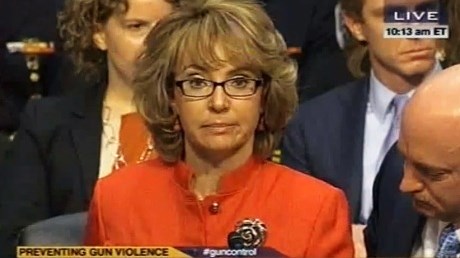 Washington Post media blogger Erik Wemple seems to be placing himself in the Gabby Giffords Can Do No Wrong camp. One post this week carried the headline “Politico: Gabby Giffords ‘gets mean.’ Really?”

Isenstadt overdid the piece in using the “even liberals think Giffords is going too far” lingo, and then cited only the Arizona Republic editorial page, which endorsed Mitt Romney. (Isenstadt corrected that sentence.) Wemple thinks that because Republicans are intimidated out of attacking a woman who was shot in the head by a madman, there’s no foul.

Team Giffords is especially intense in going after Republican Martha McSally, who’s running to take her seat in Congress (presently held by former Giffords aide Ron Barber). Wemple claimed that since McSally alone would denounce them, the Republicans are fine with them:

McSally called the ads “false and malicious,” as Isenstadt reported. Other Republicans, noted Isenstadt, “want to hit back, but it’s quite the conundrum going after Giffords.”

Another possibility is that these “nastiest,” “mean,” “bare-knuckled” tactics from Giffords’ group really aren’t all that nasty, mean and bare-knuckled. “To be honest, we haven’t really gotten much criticism at all,” says Pia Carusone, senior adviser of Americans for Responsible Solutions.

Isenstadt began his piece with an attention-grabbing lede: “Gabby Giffords, irreproachable figure of sympathy, has fashioned an improbable new role for herself this election year: ruthless attack dog.” Check out this hammer-and-tongs ad against McSally:

As Isenstadt put it:

One features a wrenching testimonial from a woman named Vicki who weeps and stumbles over her words as she recounts how her 19-year-old daughter was hunted down and murdered by an enraged ex-boyfriend.

“He had threatened her before. I knew. I just knew,” Vicki says. A narrator then declares that McSally “opposes making it harder for stalkers to get a gun.”

It’s no accident that Giffords is singling out McSally, people close to the former congresswoman say.

Another anti-McSally ad features a woman named Carol who says her daughter was killed by a criminal who bought a firearm at a gun show and didn’t receive a background check — a check, she states, that McSally would oppose.

“To McSally, it’s just politics,” Carol says as she clutches a picture of her deceased daughter. “To me, it’s personal.”

Isenstadt also made the point that Giffords could sling mud before her tragic shooting: “The Democrat proved herself to be a tough campaigner during her five years in the House....In 2010, as Democrats across the country were swept away in a conservative wave, Giffords eked out a narrow, 4,156-vote victory over a GOP opponent, Jesse Kelly, by casting him as fringe and dangerous.”

One Giffords TV ad claimed Kelly would "cut" entitlement programs beloved by seniors, adding the Republican was “more interested in greed and not interested in the rest of the population.”

That apparently, is an everyday charge inside the Washington Post headquarters.

Wemple seems to be in sync with the liberal commenters underneath his post, like this one: "I don't think it's possible for someone who has been shot in the head and crippled for life to be 'mean' to gun nuts. There is no getting back what she's lost, and she's only one of thousands injured or killed with guns every year."

It's a mudslinging holiday! Like the Outback ads say, there are no rules, just right.