Now online: the July 13 edition of Notable Quotables, MRC’s bi-weekly compilation of the latest outrageous quotes in the liberal media. This week, journalists seize upon one week's good news for President Obama to proclaim he's "clearly" a "transformational President" who has engineered "a massive progressive shift to the left."

And ABC champions the "Bernie-mentum" of socialist Bernie Sanders's far-left candidacy, cheering how his campaign events seem "more like rock concerts," while the boomlet for Donald Trump is merely evidence that "xenophobic language sells" among GOP primary voters. Highlights are posted below; the entire issue is posted online with 22 quotes at www.MRC.org. 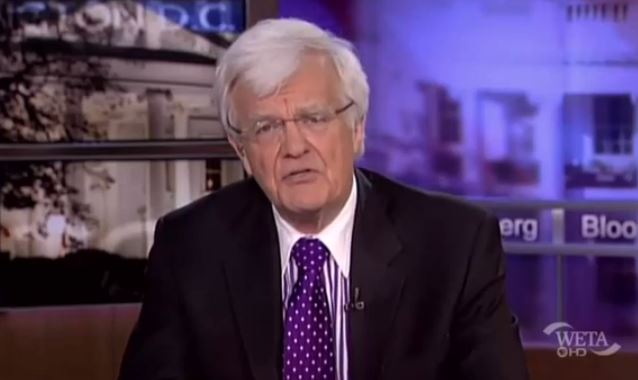 “It was a fabulous week. But what Barack Obama has really achieved is that goal he enunciated in an interview with a Reno, Nevada newspaper seven and a half years ago, to be a transformative President, like Reagan, unlike Bill Clinton. And when you look at the Affordable Health Care Act, the stimulus, a potential deal with Iran, the Trans-Pacific Trade Pact, some immigration actions — history will determine whether he’s a great or near-great President, but he is clearly a transformative President.”
— Bloomberg’s Al Hunt on PBS’s Charlie Rose, June 29.

“You talk to White House aides and they believe this — they’re calling this the best week of the Obama presidency....I think what we saw this week is a massive progressive shift to the left. So, in that case, I think it does cement a President Obama legacy-wise as being transformational — at least it’s the Obama Era.”
— Meet the Press moderator Chuck Todd on NBC Nightly News, June 27.

Another Bruising Question for the Dear Leader

“I wanted to ask you about what some people are calling ‘your best week ever’ last week. You had two Supreme Court decisions supportive of the Affordable Care Act and of gay rights. You also delivered a speech down in Charleston that was pretty warmly received. It seems that you’ve built up some political capital for the remaining months of your presidency. I’m curious, how you want to use it?”
— CNN White House correspondent Jim Acosta to President Obama in a televised press conference, June 30.

Co-host Savannah Guthrie: “If a state clerk refused to issue a marriage license to an interracial couple, would you agree with that, too?... You say it should be left to states. Would you have taken that same position on the case of interracial marriage? That that’s not a constitutional right and the states should have been free to ban interracial marriage, if they wanted to?”
Senator Ted Cruz: “Of course not....”
— Exchange on NBC’s Today, June 29.

Host Lawrence O’Donnell: “Coming up, is Justice Antonin Scalia now the Donald Trump of the Supreme Court?...Judicial scholarship aside, Scalia is proving himself to be a terrible writer. I mean, these are just terrible bits that he is sticking into these opinions and terrible thinker....”
Ex-New York Times Supreme Court correspondent Linda Greenhouse: “So my reaction, Lawrence, is that, you know, beyond the court jester’s stuff and the rhetoric stuff, here is a man who is approaching 80 years old. He has been on the Supreme Court for a long time, and he has failed.”
— MSNBC’s The Last Word, June 29.

Host Krystal Ball: “So, the person on the Republican side who seems to be surging in the polls at the moment is Donald Trump....What does it say about the Republican Party that this guy seems to have some momentum?”
The Huffington Post’s Howard Fineman: “Well, it says that the Republican Party’s an even bigger mess than the Democratic Party....Even though Trump is getting in tremendous trouble financially and politically for his comments about Hispanics, that kind of xenophobic language sells in New Hampshire and Iowa.”
— MSNBC’s The Cycle, July 7.

“I know you staunchly oppose President Obama’s executive actions on immigration. You’ve worked to block every legislative effort to allow undocumented immigrants to remain legally in this country. So, given the fact that your father immigrated here from Cuba, do you have any empathy for people who come here looking for a better way of life?”
— Yahoo! News anchor Katie Couric to Republican presidential candidate Ted Cruz in a June 29 interview.

“She may be the Democratic front-runner, but this morning [Hillary] Clinton is ‘feeling the Bern.’ Challenger Vermont Senator Bernie Sanders seeing a massive turnout at a campaign rally overnight in Maine, that at times felt more like a rock concert. In recent days, ‘Bernie-mentum’ drawing larger crowds than every candidate running in the 2016 race for the White House.”
— Correspondent Cecilia Vega on ABC’s Good Morning America, July 7.

“A Clinton-Sanders ticket would, of course, put the American right on suicide watch....You’d certainly see right-wing media entities do everything within their power to try to stop a Clinton-Sanders ticket from winning on November 8, 2016. Yet they’d likely fail — and their failure would finally put the corpse of Reaganism into the ground once and for all. Sanders is the living refutation of Reaganism, and the vice presidency would provide an effective bully pulpit to push back against the false arguments made by those who still worship the false idol who was the 40th President of the United States.”
— Washington Monthly blogger D.R. Tucker, June 27.

Really Wants Jenner to Transition from an (R) to (D)

“This may be a long shot, but ... are you still a Republican? Statistically, single white women are vastly more likely to be Democrats than are single white men, and I am hoping your change of part has been accompanied by a change of heart! I credit single women and their sane and compassionate politics for having saved the Republic over the last few years. If rabid, grumpy single white men had been the overriding constituency in the last two national elections, I suspect that by now most middle-school science textbooks would have been replaced by the Ten Commandments, and the minimum wage would have been reduced to $2 an hour on the theory that Wal-Mart and McDonald’s already provide their employees a nice warm place to be for eight hours a day.”
— Washington Post Magazine columnist Gene Weingarten in a June 28 open letter to Caitlyn Jenner.

Another Fine Example of Liberal Tolerance