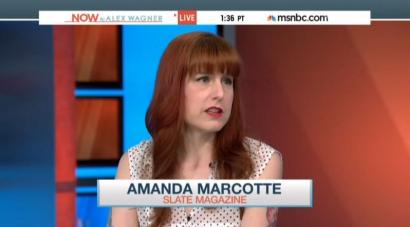 Hillary Clinton was recently diagnosed with pneumonia. Barack Obama was not born in Kenya or anywhere else other than Honolulu, Hawaii. So what do Hillary fact and Obama fiction have in common? Amanda Marcotte has a sexism- and racism-related explanation.

“The feigned concerns over Clinton’s health strongly resemble the feigned concerns that Obama was faking his natural born citizenship,” wrote the Salon pundit in a Tuesday piece, “right down to the posturing about how this is all the target’s fault for not providing more and more documentation -- to drive home how much those of us who aren’t white men cannot be trusted. In both cases, it’s about wallowing in ugly stereotypes -- that black people aren’t patriots, that women are inherently fragile -- without admitting that’s what’s going on.”

Her kicker: “And no surprise that the person behind the Clinton health hysteria is also the same man who was pushing the Obama birth certificate hysteria: Donald Trump.”

Marcotte contended that a male presidential candidate “who got wobbly at a 9/11 memorial service because he was battling a minor case of pneumonia would be regaled as a hero. How tough and patriotic he is to brave the summer heat while wearing a Kevlar vest, even though his doctor told him to stay in bed for a couple days!...But since the candidate in question is a she and not a he, the narrative is very different…Now that it’s Hillary Clinton, everyone’s wondering if Grandma is too weak and fragile for the job.”

“There’s never been this much attention paid to a candidate’s body,” claimed Marcotte. “Women are perceived as public property in the way men are not, which is why ‘nip slips’ and ‘upskirts’ are a much bigger business than monitoring the state of celebrity penises.” In any event, “there is no evidence-based reason to think Clinton is fragile. In fact, quite the opposite is the case.”