Left-Wing Bloggers on Pence: A ‘Wingnut’ Who Takes Advice From ‘Bed-Sniffing’ Preachers 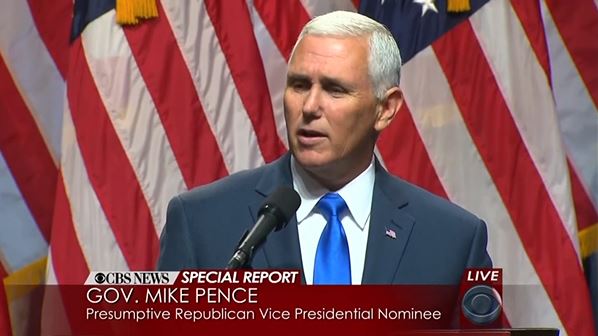 In Pierce’s view, Pence is a “very strange and completely unreconstructed wingnut” whose paper trail contains “a rich deposit of sweet crude crazy.” Pierce elaborated, “It's on the issue of a woman's right to choose where Pence really has dedicated his life to going bananas. Of all the anti-choicers, he's one of the choicest anti-ers. He was one of the pioneers in the assault on Planned Parenthood. This past March, Pence signed a bill that would force women who undergo an abortion to…wait for it…pay for the funeral of the aborted fetus.”

Pence did back down last year on Indiana’s RFRA, siding with corporations over the religious right, which was what Pierce had in mind when he called Pence “a towering lightweight whose basic philosophy is divined from whatever bed-sniffing yahoo preacher or Hoosier plutocrat spoke to him last.”

Slate’s Mark Joseph Stern downplayed Pence’s conservatism: “The religious liberty flap demonstrated that Pence is casually anti-gay, startlingly craven, and extraordinarily vacuous…Pence is a fatuous yes-man, a milquetoast mook with no strong convictions other than a desire to win and be popular. He will faithfully follow Trump’s whims and commands, even as they lead him (and the country) toward the abyss. An unprincipled puppet is exactly what Trump needs for vice president. And it is exactly what he has in Mike Pence.”

Conversely, Kevin Drum of Mother Jones portrayed Pence as an ideologue, “a hardline conservative and a ferocious opponent of abortion. There was a time when he was one of the most conservative men in Congress, but time passed and now he's just a run-of-the-mill lunatic conservative…Pence is not especially bright or quick on his feet, which means he might have trouble defending Trump's frequent idiocies and backflips. It should be fun to watch him squirm.”