Much of the left only kinda-sorta distinguishes between mainstream pro-lifers and the violent fringe responsible for acts such as the killing of George Tiller. Take Daily Kos writer Dante Atkins, who on Sunday acknowledged that a mere “aspect” of the pro-life movement resorts to terrorism, but a few lines later asserted that the “movement…publicly celebrated” Tiller’s murder. Atkins also claimed that “anti-abortion activists will continue to…skirt the fringes of legality in their efforts to make women feel unsafe in exercising their constitutional rights.”

These riffs on abortion were just the intro to Atkins’s climactic point: that conservatives should have to deal with a form of sidewalk counseling from (possibly armed) lefties, and not just outside abortion clinics, either. From Atkins’s post (emphasis added):

The Massachusetts [buffer-zone] law whose constitutionality [the Supreme Court recently] decided…was passed in no small part owing to a multiple-casualty shooting in 1994 that impacted two clinics in the Boston area. And while the most severe acts of violence against life and property—the murders, the firebombings, the acid attacks—may often be prosecuted, the lesser evils of harassment, verbal abuse, stalking and implications of future violence that are such a frequent staple of anti-abortion protesters rarely are.

But even if, as the Supreme Court suggests in its ruling, that it is within the purview of law enforcement and the legislature to find the line between legitimate "sidewalk counseling" and the type of threatening activities that should be legitimately proscribed in the interests of the safety of patiens, doctors and staff, it would not matter.

The entire idea of buffer zone legislation is not to protect against grandmothers like [Eleanor] McCullen, but rather against the aspect of the anti-abortion movement that uses the tactics of domestic terrorism to achieve its ends. The entire point of public postings of photos of both patients and doctors, of taking down license plate numbers, of the vitriolic verbal abuse, and yes, the bombings and the murders, is to convince patients, doctors and staff that their physical safety is on the line should they take advantage of the services and employment that the constitution guarantees them. This is a movement, after all, that publicly celebrated the murder of a man who was providing a legal service to women with little other recourse.

…[T]he long pre-existing history of extreme clinic violence cannot be ignored, and it is simply a matter of time before the next incident. In the interim, anti-abortion activists will continue to push every possible button and skirt the fringes of legality in their efforts to make women feel unsafe in exercising their constitutional rights.

But wanting to make people feel unsafe is a hallmark of right-wing activism these days, whether it's harassment at abortion clinics or a planned event by open carry activists to parade with assault rifles down the streets of a black neighborhood. And given that, maybe the Rude Pundit is right about his assessment of where to go from here:

Shit, let's plaster the telephone poles with photos of the priests and church leaders, their addresses, their phone numbers. Let's tell them as they pass, "We know where you live." Let's film everyone going into the church and post those on a website. Hey, it's a public fuckin' sidewalk, man. Let's scream at them about how they're terrible people, how they support raping children, how they have given money to help silence victims...

Going to church is a choice, no? Let's make sure they regret that fuckin' choice, however legal it may be for them to make it. Then let's see how quickly they're begging for buffer zones.

Who knows? Maybe in states where it's legal to open carry, these "sidewalk counselors" can show off their Second Amendment rights while exercising protected First Amendment speech on a public sidewalk...Perhaps conservatives should be counseled everywhere they might congregate: the CPAC convention perhaps, or public appearances of the stars of Duck Dynasty. One wonders how long it would take conservatives, and perhaps the Supreme Court, to reconsider the merits of the First Amendment right to counseling people on a public sidewalk. 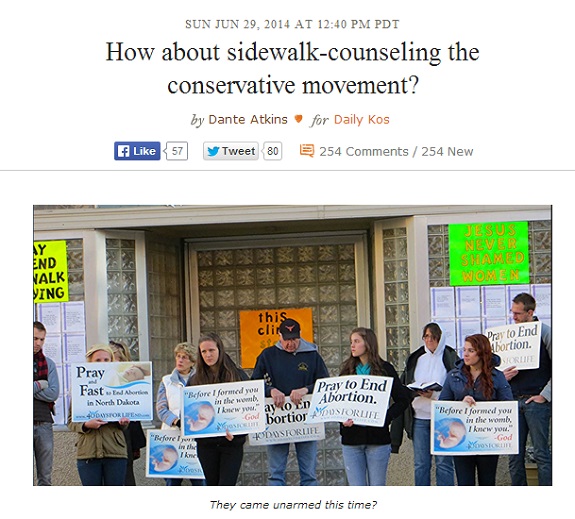