On Tuesday, Julia Seymour at NewsBusters reported that the Friday evening news shows on all three networks spent a few seconds noting the government's somewhat disappointing but hardly alarming job-creation number for December (148,000 seasonally adjusted payroll jobs) reported earlier that day. Seymour observed that "Those same news programs (have) often underreported good economic news in the past year." Consistent with that pattern of selectivity, the three networks failed to note that Friday's job release reported the lowest black unemployment rate on record.

The seasonally adjusted black unemployment rate in December was 6.8 percent, the first time that rate has ever fallen below 7 percent. A look at the monthly detail for all 46 years of available data shows that the previous lows were 7.0 percent, seen in both April 2000 and September 2017.

No other month during 1999 or 2000, the last time black unemployment dipped to historically low levels, came in under 7.3 percent. Almost no one knows that 2017 contains four of the five lowest reported monthly black unemployment rates on record: June's 7.1 percent, September's 7.0 percent, November's 7.2 percent, and December's 6.8 percent.

Digging further, December's raw unemployment rate of 6.3 percent (before seasonal adjustments) is by far the lowest December on record. The previous December low was 6.9 percent in 2000. 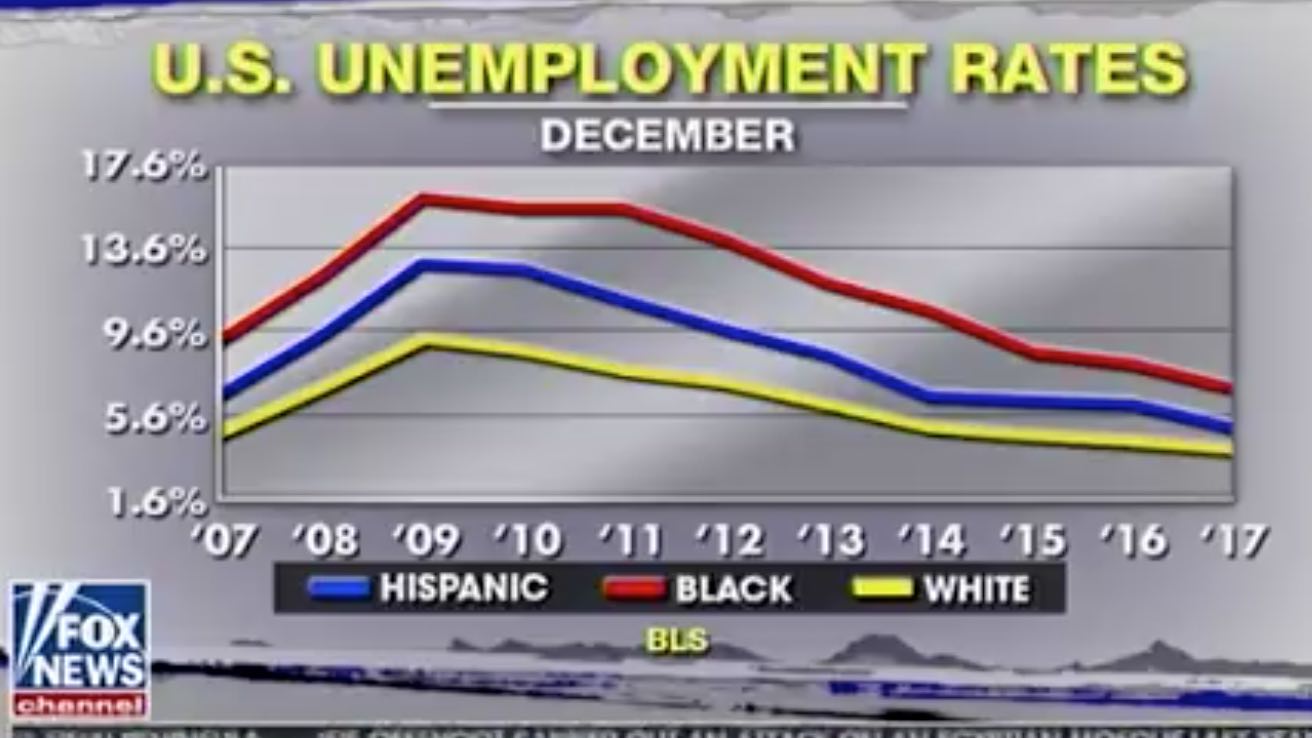 It's hard to imagine that the Big Three networks would have failed to report this remarkable story if it had occurred during Barack Obama's presidency. They certainly can't claim that the they didn't know, given that their primary gatekeeping news source, the Associated Press, reported the news on Friday, both in its post-release coverage and in a separate item devoted solely to that topic authored by the wire service's Christopher Rugaber which first appeared Friday afternoon.

What the networks and the rest of the establishment press did during Obama's presidency was cover up how awful the employment situation was for blacks during that time.

A look at a graph of seasonally adjusted black unemployment during the past 30 years tells the tale:

The black unemployment rate in January 2009, the surveys for which were conducted a week before his inauguration, was 12.7 percent. Despite trillions of dollars of so-called stimulus from record federal budget deficits and over $4 trillion in unprecedented "money-from-nothing" quantitative easing by the Federal Reserve, the black unemployment rate at first just kept on rising, peaking at 16.8 percent in March 2010. It didn't move permanently below 15 percent until early 2012, didn't stay below the 12.7 percent Obama "inherited" until November 2013, and didn't get below 11.3 percent, the previous decade's pre-recession peak, until September 2014, almost seven years after Obama he was inaugurated. By that time, white unemployment was only 5.1 percent. That's a lot of suffering.

Many people in the black community noticed how the Obama economy was leaving them behind. By the summer of 2011, as seen in a video covering a Congressional Black Caucus event found here, emotions were beginning to boil over. In that video, far-left African-American congresswoman Maxine Waters essentially admitted, in the words of a reporter at The Blaze, that the CBC had been "keeping quiet" about protesting conditions in the black community because of "fear of retribution" from other Democratic Party leaders and everyday Democratic voters.

A month later, Obama, ended a speech at a CBC awards dinner by telling the audience, after acknowledging the existence of serious problems, to, in essence, shut up and suck it up:

I expect all of you to march with me and press on. (Applause.)  Take off your bedroom slippers, put on your marching shoes.  Shake it off.  (Applause.)  Stop complaining, stop grumbling, stop crying.  We are going to press on.  We’ve got work to do.

Very little if any of this clearly newsworthy tension — let alone the also clearly newsworthy disproportionate post-recession suffering in the black community — made the evening news shows. Continuing to protect, support, and excuse President Obama was far more important.