Why? CNN Thinks Coordinated GOP Talking Points on Mueller Is a Scandal

Charges that the Obama administration's FBI and Justice Department may have actively worked to prevent Donald Trump's election have really gotten under CNN's thin skin. 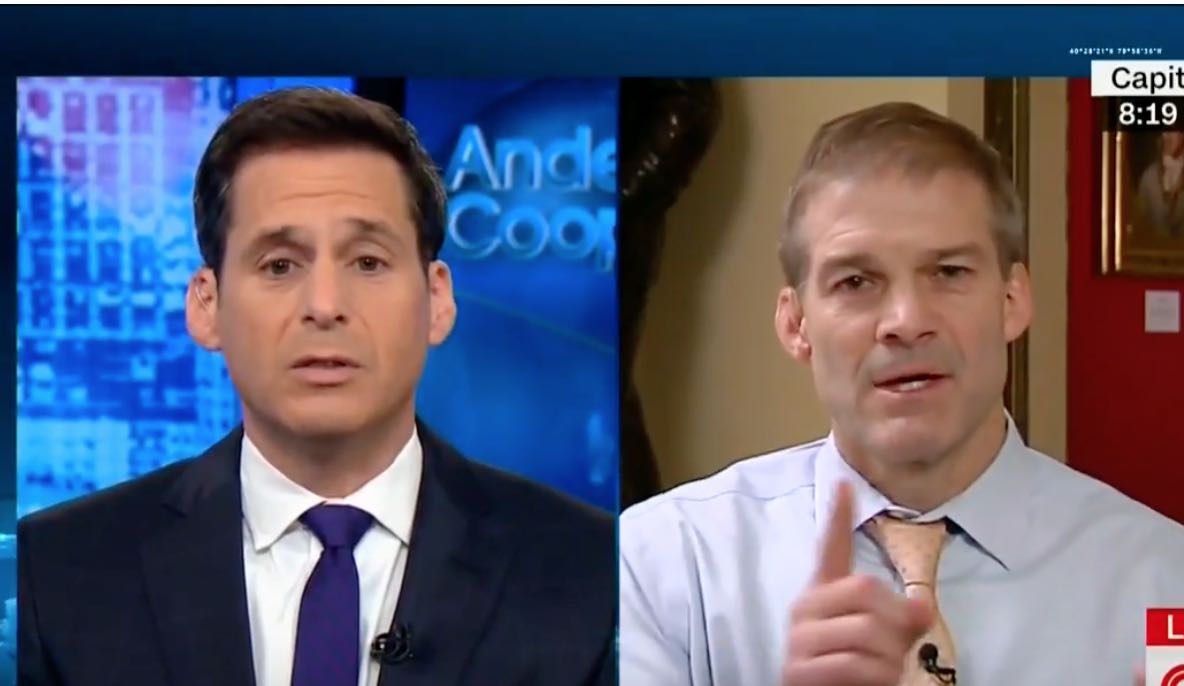 On December 20, the network took out its frustrations on Ohio Republican Congressman Jim Jordan, both in John Berman's hostile interview and in the one-sided panel discussion which followed.

Since the 2016 presidential election, CNN's heavy investment in the establishment press's Trump-Russia collusion narrative has backfired more times than anyone can hope to count. That said, it's reasonable to believe that the network is willing to tolerate the damage, because it has continued to push anonymously sourced stories which are either false or extremely shaky which get wide play, and are then followed by barely noticed "corrections" or "clarifications."

Sadly, that strategy, which other establishment press outlets have emulated in violation of long-held journalistic standards, has convinced a significant percentage of the American people, even in the absence of genuine evidence, that Trump has done something illegal or unethical in regards to Russia, and that he has tried to impede or obstruct the investigation.

The linked Associated Press-NORC December 7-11 poll is ridiculously skewed, with 47 percent Democrats and only 32 percent Republicans. But even after proper rebalancing, the percentage of Americans believing those things is absurdly high.

However, that same poll also shows that a growing number of Americans are uncomfortable with Special Counsel Robert Mueller and his investigation. 31 percent have only moderate confidence, and 42 percent have little or none — percentages which would almost certainly be higher with a genuinely representative sample.

The AP-NORC poll was taken before the press's Russia-Trump collusion narrative was turned on its head with the release of Peter Strzok's text messages. Evidence has since mounted that the real colluders were those in senior FBI and DOJ positions who couldn't handle the prospect of Donald Trump's presence in the White House and appear to have engaged in orchestrated and dishonest efforts, coordinated with the shadowy "opposition research" firm Fusion GPS, first to stop him from winning the election, and then to discredit him when he prevailed.

CNN is acting as if it won't allow this turning of the tables to stand. Thus, the following segment from Congressman Jordan's Tuesday morning appearance on the far more widely viewed Fox & Friends — the top-rated morning cable news show for 192 consecutive months which is perceived as "Trump’s favorite show" — must have pushed their anger meters deeply into the red:

The key takeaway (at the 0:42 mark; bolds are mine throughout this post):

CONGRESSMAN JIM JORDAN: ... But everything points to — from what we learned several weeks ago, that they paid for the dossier, to the fact I believe that dossier, that fake dossier, was used as the basis to get warrants, to now what we've learned about Peter Strzok and Bruce Ohr and the FBI and the Justice Department, respectively. Everything points to the fact that there was an orchestrated plan to try to prevent Donald Trump from being the next President of the United States.

On Wednesday, CNN's John Berman, substituting as host on Anderson Cooper 360, introduced his Jordan interview segment by referring to a similar statement made by the Congressman on Fox News radio (likely to avoid having to recognize the morning TV program which is leaving CNN in the dust).

Berman spent the first three-plus minutes of the interview focusing on an obviously advance-planned obsession with the idea, inspired by an accusation by Democratic Party Senator Mark Warner of Virginia, that Republicans are engaging in, per Warner, a "reckless" and "seemingly coordinated" effort to discredit Mueller and his investigation and to get him fired.

Berman acted as if he was a prosecutor interviewing a hostile witness, continuously and rudely interrupting Jordan over whether he was "coordinating" his "talking points" with the Trump administration and Fox News(!), even though Jordan, who in hindsight should just have said "no" initially, said "Of course not" 90 seconds in.

Perhaps CNN should ask itself: if the Republicans coordinating talking points between the White House and Congress on a special prosecutor is a "reckless" scandal, then why didn't CNN object when Bill Clinton's White House and the Democrats did it with Kenneth Starr? Why didn't CNN object when the White House shared talking points it knew it were dishonest about the deadly Benghazi consulate attack being caused by a YouTube video?

When he finally exhausted his game of "coordination" stallball, the CNN host continued with more distractions, bringing up matters long since settled, including Donald Trump Jr.'s meeting with inconsequential Russian citizens. Berman's clear strategy was to distract viewers from the Congressman's message and to attack his credibility by planting doubts where none are justified.

What follows is the full video segment. CNN's weak attempt to transcribe it is here (HT to longtime NB commenter Gary Hall; readers can immediately get to the Berman-Jordan interview at the link by doing a word find on "magnitude"). The portion transcribed below deals with Berman's irrational obsession with "coordination." The video has been embedded to begin at the 0:36 mark:

Transcript (from 0:36 to 3:12; CNN's transcript has been corrected and modified where necessary, but several attempts by Berman to interrupt and by Jordan to try to continue his points have not been included):

JOHN BERMAN, CNN: Are you part of a coordinated effort?

JORDAN: I think the senator gave his speech today because of all the facts we've learned in the last several weeks, facts like the DNC and the Clinton campaign paid for the dossier.

JORDAN: Facts like, facts like Peter Strzok and Lisa Page, the text messages that they exchanged. That's why he gave the speech today. It has nothing to do with the fact that he's worried about the president getting rid of Mueller. It had everything to do with all of these facts that are coming out that go to the heart of this issue and --

JORDAN: I have not called -- like we've just had Mr. Sessions, Mr. Rosenstein, Mr. Wray in front of us. I did not talk to the White House about what kind of questions I was going to ask. I'm basing them on the evidence and the facts that have come out, like I just did -- how do you get around the text message --

But my questions in those committees were driven by the evidence we've received in the last several weeks like the text message from Peter Strzok where he says we can't afford to take the risk that the American people are going to elect Donald Trump so we need an insurance policy. If that doesn't go to intent to have a plan to influence the election, I don't know what does.

BERMAN: Understood. Understood. OK, Congressman -- and I want to talk about this for a second. I want to talk about your argument here in a second, but I'm trying to get to the issue of coordination. You just said, "of course," you talk to the White House -- "of course, we talk to the White House" about the Mueller investigation.

But here's the coordination. The Clinton campaign and the DNC, now that we know those are one and the same, paid the law firm, who paid Fusion GPS, who paid Christopher Steele, who paid Russians to give him this dossier, to get this dossier, that was we think taken to the FISA court and was the basis for securing warrants to spy on Americans. The coordination was between the Clinton campaign and Russians to influence the election.

BERMAN: I want to get to issue. I want to stay on the issue for coordination for one second.

JORDAN: No. I talk to my colleagues, I look at the evidence and I talk with our press people who book us on your show and we talk about the coordination that exists between the Clinton campaign and the Russians.

Berman's post-interview panel unanimously went after Jordan and those who are having a problem with the conduct of Mueller's investigation and some of its members:

It is treatment like this of center-right guests and viewpoints which explains why CNN's ratings and credibility continue to slide. The network is clearly betting what little is left of its reputation on permanently convincing the American people Trump-Russia collusion narrative is true, and on being able to discredit any attempts to look back at the Obama administration's scandalous pre-election conduct and at its own dealings with Russia.