ABC 'This Week': Tax Cuts Are 'Temporary,' and Won't 'Be Realized For More Than a Year'

On Sunday's This Week show on ABC, host Jonathan Karl and Bloomberg News's Margaret Talev displayed stunning historical naivete in characterizing the tax cuts for individuals in the tax law signed several days ago by President Trump as "temporary." 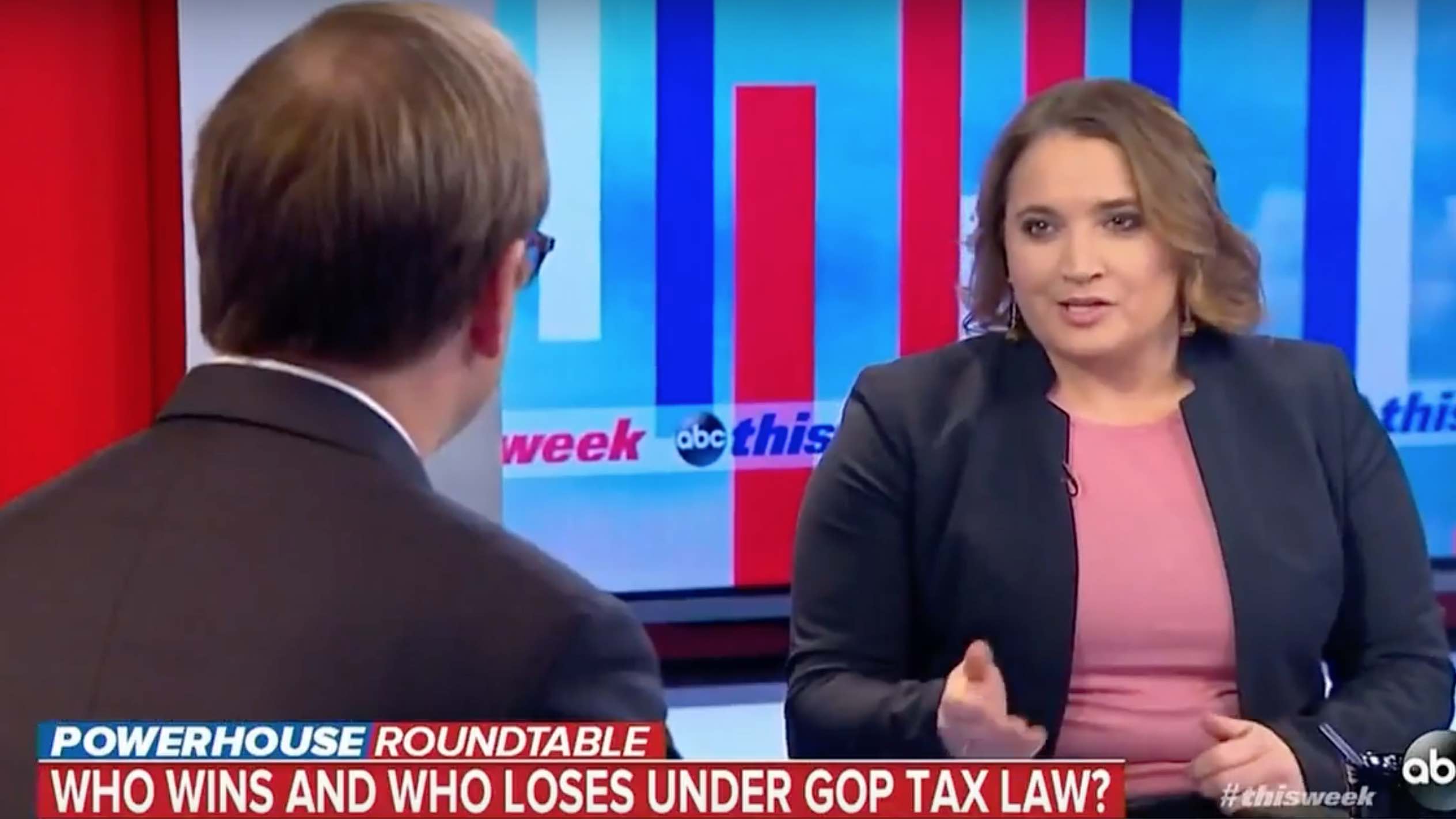 Talev went one step further, claiming, despite the quite visible legislation-related bonuses so many companies have handed out and minimum-wage moves they have implemented, and despite the fact that the effects of individual tax reductions will be seen in paychecks by early February, that the "beneficial effects in the near-term are not really going to be realized for more than a year."

It's not as if this is the first time a President and Congress have had to pass legislation with tax cuts expiring in far-out years to pass arcane federal budget forecasting muster. The Bush tax cuts early last decade worked the same way.

Those cuts passed in 2003 were set to expire in 2010. But that didn't happen, simply because when push came to shove, even a lame-duck Democrat-dominated Congress and a Democratic Party President didn't have the will to reimpose the old Clinton-era tax regime. In late 2010, the cuts were extended for two years, even though the Democrats could have made them permanent and kept them that way even after Republicans recaptured the House in the 2010 midterm elections. Then in late 2012, with a Republican-controlled House and a Democrat-majority Senate, as a result of the legislation arising from the infamous "fiscal cliff" standoff, the Bush tax cuts were made permanent for the vast majority of taxpayers.

Though the "fiscal cliff" tax bill was ill-advised, most taxpayers were left alone, meaning that for well over 90 percent of taxpayers, the Bush tax cuts became permanent (or as permanent as anything in Washington can be). The exceptions involved:

Despite this history, Jonathan Karl portrayed the just-signed legislation's tax cuts for individuals as "temporary." Karl's statement was followed by the ridiculous claim by Bloomberg's Talev that the tax law's impact won't be noticed until 2019:

JONATHAN KARL, ABC NEWS: One thing about this is the tax cuts for individuals are temporary.

KARL: The tax cuts the for corporations are permanent. That’s a hard thing to sell, but the temporary is — I mean, they’re not going to expire for several years.

TALEV: I mean, that’s right. Ten years will get Republicans through the midterms and the next presidential election.

TALEV: There are a couple of elements that are in play here and one is the sort of blue state versus red state factor, which tracks to some degree with the President’s base and where those folks live, but there are Republicans in coastal states who are a, going to be turned off by this, and b, it may affect reelection prospects in the midterms. And while the effects — the beneficial effects in the near-term are not really going to be realized for more than a year, those elections are coming up in November. And there are deficit implications as well.

Most people I know wouldn't think that the definition of "several" goes as high as ten (or even eight, which is the correct number, given that the individual cuts expire at the end of 2025).

As to Talev's claim that "beneficial effects in the near-term are not really going to be realized for more than a year," tell that the employee recipients of corporate bonuses, pay increases, and charitable efforts which have been directly tied to the passage of the tax law (the list is by no means complete, as many nonpublic companies have surely paid out bonuses and pay increases without fanfare):

Additionally, the effects of the law's changes are on track to be seen in paychecks beginning in February.

ABC's Karl, Bloomberg's Talev, and the This Week panelists who laughed at all the "problems" Republicans supposedly have appear to be more interested in engaging in wishful thinking than they were in reality-based analysis.