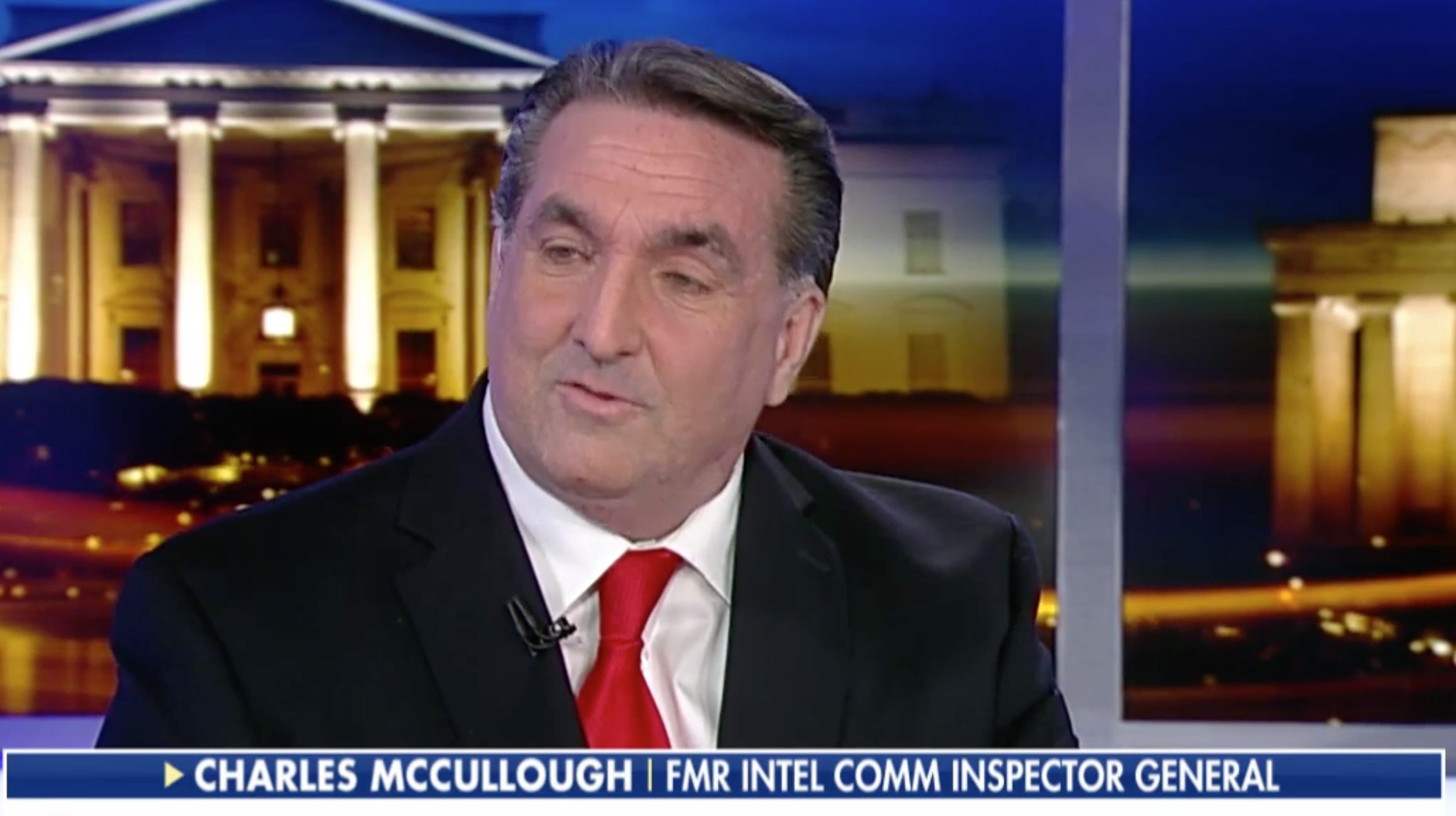 During the past week, most people who follow center-right news outlets and blogs became familiar with the name of Charles McCullough III. McCullough, the former Intel Community General Inspector who identified 22 "beyond classified" emails present on Hillary Clinton's home-brew server years after she had left her position as Obama administration Secretary of State, has appeared on several Fox shows revealing that he was harassed and threatened for reporting that finding to his superiors, and that he was promised that he would be fired once Mrs. Clinton won the 2016 general election (oops).

Very few establishment press outlets have done anything with the story in the past six days, and the rare exceptions have used McCullough's revelations as a platform to take shots at President Donald Trump.

Lou Dobbs brought up McCullough on his Fox Business show on Tuesday, and showed a different portion of Herridge's interview where the former General Inspector said that "There was personal blowback to me, to my family" as a result of his attempts to pursue the matter.

Despite all of this, a search on McCullough's last name at the Associated Press' APnews.com site at 4:30 Sunday afternoon, six days after his first appearance on Fox, returned nothing relevant. This was also the case with a search on his full name at the New York Times.

As of late afternoon Sunday, only four outlets which aren't clearly center-right have weighed in. As usual, they have used President Trump's related Twitter activity as their reason to cover the story, and have downplayed the significance of the story's substance.

Thursday afternoon at Vox.com, Zeeshan Aleem whined that "It’s unclear what Trump is getting at when he talks about some 'deep state' effort to silence investigations into Clinton’s e-mails. If anything, they’ve been given too much attention." As McCullough has stated, if they had been given the attention they deserved, Hillary Clinton would be where McCullough said he would be if he had done the same thing: sitting "in Leavenworth."

At CNN.com on Tuesday, Z. Byron Wolf obsessed over the fact that Trump had finally used the term "deep state" to describe the Washington establishment and the internal resistance his administration has encountered with the government, describing "the idea that an entrenched bureaucracy is working to delegitimize him," as a "conspiracy theory." Only a fool believes such an unprecedented effort by Obama holdovers, especially in the FBI and the Department of Justice, isn't in place. As to Wolf, what would one expect from a guy who wrote with a straight face that Robert Mueller is just "a special counsel methodically investigating possible collusion"?

Greg Price at Newsweek has weighed in with two items. On November 29, he characterized McCullough's story as a "NEW CLINTON CONSPIRACY THEORY," and on Saturday repeated the ridicule after Trump's tweet: "CAN TRUMP PUT HILLARY CLINTON IN JAIL OVER NEW EMAIL CONSPIRACY SCANDAL?"

Sunday morning, Daniel Politi at Slate.com tried to portray Trump's reaction to the McCullough revelations as a form of self-defense against Robert Mueller garnering a guilty plea for lying to the FBI from Michael Flynn. That's pretty weak, given the legion of people, including Andrew McCarthy at National Review, who have weighed in observing that Flynn's plea, in McCarthy's words, that "there was no actionable, conspiratorial complicity by the Trump campaign in the Kremlin’s machinations" during the 2016 election.

The best evidence that Charles McCullough is telling the truth is that if he wasn't, Democrats, 2016 Clinton campaign members, and Congress would be heartily denying his charges. Instead, they're employing silence and strangely failed memories. Those who employ these tactics usually do so to delay and stonewall, not to demonstrate their innocence.