At The New Yorker on Tuesday, Jeffrey Frank reached what one hopes is the worst we'll see of Trump Derangement Syndrome — but don't get your hopes up.

Frank, in attempting to analyze what might have caused registered Democrat Rene Boucher to attack Senator Rand Paul two weeks ago, blamed "the sinister banality of American life ... with a lot of it these days emanating from Donald J. Trump."

As the late great Noel Sheppard often observed in covering the media's serial absurdities, "I kid you not."

Frank, a senior editor at the magazine from 1995 to 2009, is now a "regular contributor" at its website. His six-paragraph effort Tuesday comes off as phoned in while sleepwalking. 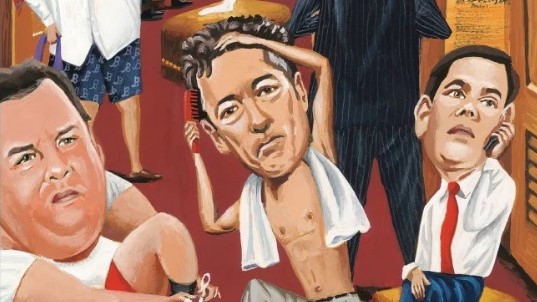 A large portion of Frank's column recounts what is already known. Beyond Paul's six broken ribs and his impaired breathing, attacker Rene Boucher's arrest, and Paul's return to work in Washington, it doesn't bear repeating. As so many in the press have done since the attack on Paul, Frank gave undue attention to the gated community's developer, who, though he has served as Warren County, Kentucky's Republican chairman, somehow believes that Boucher is a "near-perfect neighbor," while Paul is an annoying guy who believes in property rights.

At the end of his third paragraph, Frank started heading over the edge, coming pretty close to blaming the assault on Paul himself:

Pumpkins and compost may well be at the root of things. This fall has been unusually warm in Kentucky, and the heat may affect decomposing organic matter in unpleasant, olfactory ways. Paul, who leans toward libertarianism, could well have considered the compost of a private gardener, on private property, to be an inalienable right, and one can sympathize with that view.

So in Frank's mind, Boucher's attack appears to be somewhat justified because of unpleasant smells in a community with huge lots. Lord, have, mercy. According to the UK Daily Mail, "Boucher and Paul's homes are 250 ft. apart."

But Frank wasn't done, not by a long shot.

In his final rambling paragraph, he figured out a way to place some of the blame of President Trump.

The magazine was so impressed with Frank's tie-in that it tweeted it out to tease the article (HT Twitchy):

(Novelist Thomas) Berger (who wrote Neighbors) told the critic Richard Schickel what he’d learned from Kafka: “That at any moment banality might turn sinister, for existence was not meant to be unfailingly genial.” The sinister banality of American life periodically moves into view, with a lot of it these days emanating from Donald J. Trump, the person who was elected President, a year ago. Since that time, there have been many reminders that there are indeed things worth fighting for: that, in this most fortunate of nations, re-learning, and believing in, the virtues of coöperation across borders, and ideologies, is among them. The attack on Rand Paul, whether over lawn trimmings, compost, the noise of a riding mower, or something still concealed, is a reminder of how easy it is to get worked up, even crazily so, over all sorts of questions—such as Keurig’s reluctance to sponsor Sean Hannity—that, in the end, mostly manage to break a lot of coffee makers while dividing Americans.

In the fantasyland of the New Yorker and Frank, a lot of the "banality of life" is Donald Trump's fault, and that banality manifested itself in a "sinister" way in Boucher's attack.

So a supposedly highbrow magazine's website has partially blamed a Democrat's savage attack on a sitting Republican United States Senator on the sitting Republican President who had just left Washington to begin his 12-day trip to Asia.

You can't make this stuff up.

This is so stupid even fever-swamp leftists won't buy it. Or will they?

[Image from 2015 New Yorker cover that omitted the black and female GOP contenders.]