Many of Kentucky Senator Rand Paul's neighbors are hotly disputing Louisville Courier Journal and New York Times reports which characterized the Friday assault on the Republican Senator as being the result of "petty arguments over misplaced lawn trimmings and branches" and "a landscaping dispute," respectively.

Among their objections: The Courier Journal's Thomas Novelly described the attack, during which Rene Boucher allegedly blindsided Paul and, per the Senator's most recent tweet, left him with six broken ribs and a "pleural effusion" as a "fight," while the opening sentence at the Times story authored by three reporters described it as an "altercation."

Per WebMD, a pleural effusion is "an unusual amount of fluid around the lung." The site's list of the possible treatments for the condition, depending on its severity, is daunting, ranging from inserting a tube or catheter all the way up to surgery.

By all accounts, Paul was hit with a blindside tackle by Boucher while he was mowing his lawn. In any dictionary — apparently with the exception of the one journalists must be using to describe attacks on Republican and conservative politicians — this was an assault ("a sudden, violent attack"), and not a "fight" ("a battle or combat; any contest or struggle; an angry argument or disagreement") or "altercation" ("a heated or angry dispute; noisy argument or controversy").

While the Courier-Journal merely relayed the gated community developer's description of Boucher as a "near-perfect" neighbor and the trio of reporters at the Times only described him as "a registered Democrat," Bedard found a man who "was aggressively anti-Trump and anti-GOP in his social media, calling for the impeachment of the president and urging Russia investigator Robert Mueller to “fry 'Trump’s gonads.'" (As I noted at NewsBusters yesterday, the developer, Jim Skaggs, is a 2016 Kentucky Presidential elector, an establishment Republican who is on the state party's executive committee, and has described Paul as "a right-wing radical.")

As to what the neighbors think of Paul, the Courier Journal only quoted Skaggs, who lives in the development. The Times cited an unspecified number of "neighbors" to support the "trivial dispute" claim Boucher's lawyer is promoting, but only specifcally named Skaggs and one other person. But that other person only offered a generic comment about the neighborhood — "We don’t have squabbles out here. If you can afford to live out here, you tend to your own business."

Bedard wrote that he spoke with seven neighbors, and specifically named all of them in his dispatch. They are unanimously outraged at the depictions of the Senator and the surrounding cirsumstances in the two establishment press stories:

... seven neighbors in the Rivergreen gated community told Secrets Wednesday that the Pauls are friendly homeowners who kept their property tidy. 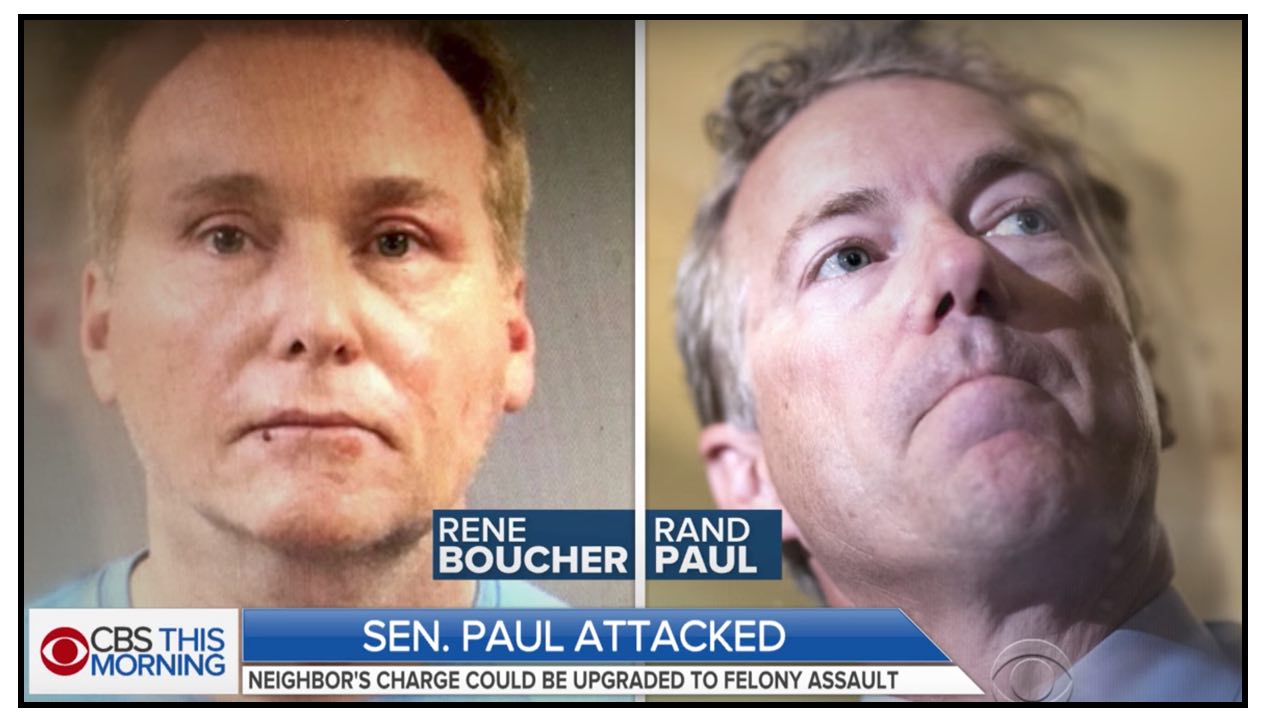 “The Paul’s landscaping looks just like everyone’s place in Rivergreen. Wish I could get him to cut my lawn,” said neighbor Robert Warner. “As a friend, neighbor and senator, Rand has been first class in every way. What I find amazing is the fact that he cuts his own grass. Our neighborhood is fortunate that the Paul’s live here,” he added.

... “The stories of a ‘landscaping dispute’ or a dispute of any sort between Rand Paul and Rene Boucher are erroneous and unfounded. The reason for Mr. Boucher’s bizarre attack is known only to him. Statements to the contrary are irresponsible and unnecessary,” said neighbor Travis Creed.

He added, “Speculation regarding Boucher’s motive has led to an unfair characterization of the Pauls and their home. The Pauls are and always have been great neighbors and friends.

... Another neighbor, Dan Renshaw, owner of a large car sales group, told us, “This episode is so wrong on so many levels" ... Renshaw also dismissed the speculation that the fight was over landscaping.

... Neighbor Alicia Stivers express shock at the violence of the attack. “I have never heard Sen. Paul speak an unkind word about anyone, let alone become physically violent. Which makes it all the more shocking that a next-door neighbor of many years who has not so much as exchanged an email or spoken word with Rand in several years, would race downhill and pummel Rand from behind,” said Stivers.

She has served four years on the neighborhood association and said that there were no reports of problems between Paul or Boucher. “I am wondering how the media can describe what took place as an altercation. Is it an altercation when no words are exchanged and one person is attacked from behind with no warning? I must check my dictionary,” she added.

And neighbors Kevin and Diona Kelly told of how Paul and his wife Kelley are friendly neighbors who even include them in their annual “Paul Family Football Game” at the holidays.

Given Bedard's work and the two establishment press stories' failure to get a relevant comment from a single identified neighbor besides the clearly agenda-driven Skaggs, it is safe to characterize the Courier Journal and Times stories as fake news.

The media seem to be bending over backward to justify his beating.

... The press seems strangely eager to legitimize and excuse violence against Republicans in general. This will not end well.

At best, it's negligent nonchalance, and at worst, it's the eagerness Reynolds described.

Monday's Times story should cause a reexamination of the paper's motivation when, in April, it published "A Who’s Who List of Agencies Guarding the Powerful." The obvious question at the time was why everyone needed to know these things. Among the items Nicholas Fandos reported was the following:

When members of Congress practice in the early mornings in an Alexandria, Va., public park for their Congressional Baseball Game, plainclothes United States Capitol Police are sitting there in a black S.U.V.

At the time, it seemed over the top to accuse the Times of giving wannabe assassins like James Hodgkinson, who attacked Republicans at that park while they were practicing for the game in June, any ideas. Hodgkinson critically wounded Louisiana Congressman Steve Scalise and injured several others before he was killed.

At the time, members of each major party were using the field to prepare for the scheduled game. When Hodgkinson approached the ballfield that day, he appeared to indicate that he saw the Times story when he specifically asked whether Democrats or Republicans were practicing.

Thanks to how it covered a potentially life-threatening attack on a sitting United States Senator with near-sympathy for the attacker, accusing the Times of planting the seeds for potential violence no longer seems completely out of line — especially because its journalists and editors surely know, despite their public denials, that leftists, especially since the election of Donald Trump, have shown an increased inclination towards and tolerance of politically motivated violence.