The underlying Daily Caller report to which Graham linked would seem to explain why CNN has been particularly hostile towards the Trump administration and even more incomplete than usual in its reporting since Tuesday evening's revelations that Hillary Clinton’s presidential campaign and the Democratic National Committee helped fund the infamous Trump-Russia dossier.

The three CNN productions reviewed here have all attacked the White House and/or Republicans while singing from the same "flipping the script" hymnal.

As Curtis Houck noted at NewsBusters on Friday, Jim Acosta, the network's ultra-belligerent White House correspondent, played his part during and after Friday's press briefing. First, he hectored Press Secretary Sarah Sanders for, in Acosta's words, “trying to gin up your own investigation up on Capitol Hill” about the 2010 U.S.-Russia uranium deal. Afterwards, he attacked the administration for engaging in “inappropriate political behavior” for even bringing up the topic, and complained that the White House was trying to "flip the script."

No Jim. The script has been decisively flipped from Trump and towards Democrats, their just-departed two-term President, and their unsuccessful 2016 presidential candidate — twice in the past two weeks.

First, on October 17, The Hill reported that the FBI uncovered a Russian bribery plot before the Obama administration approved a Russian firm's takeover of 20 percent of the U.S. uranium supply. The deal got approved anyway. Two subsequent reports by reporters John Solomon and Allison Spann filled in many gaps:

Acosta, and surely others in the establishment press, are furious that Trump made sure that the FBI informant mentioned above would no longer be blocked from testifying. Cry me a river. The original block, which reportedly involved threatening the informant's job, career, and "liberty" in the absence of compliance, came from the Obama administration's Justice Department under then-Attorney General Eric Holder. Only a fool would believe, concerning a matter this sensitive, that President Obama wasn't aware of DOJ's moves. 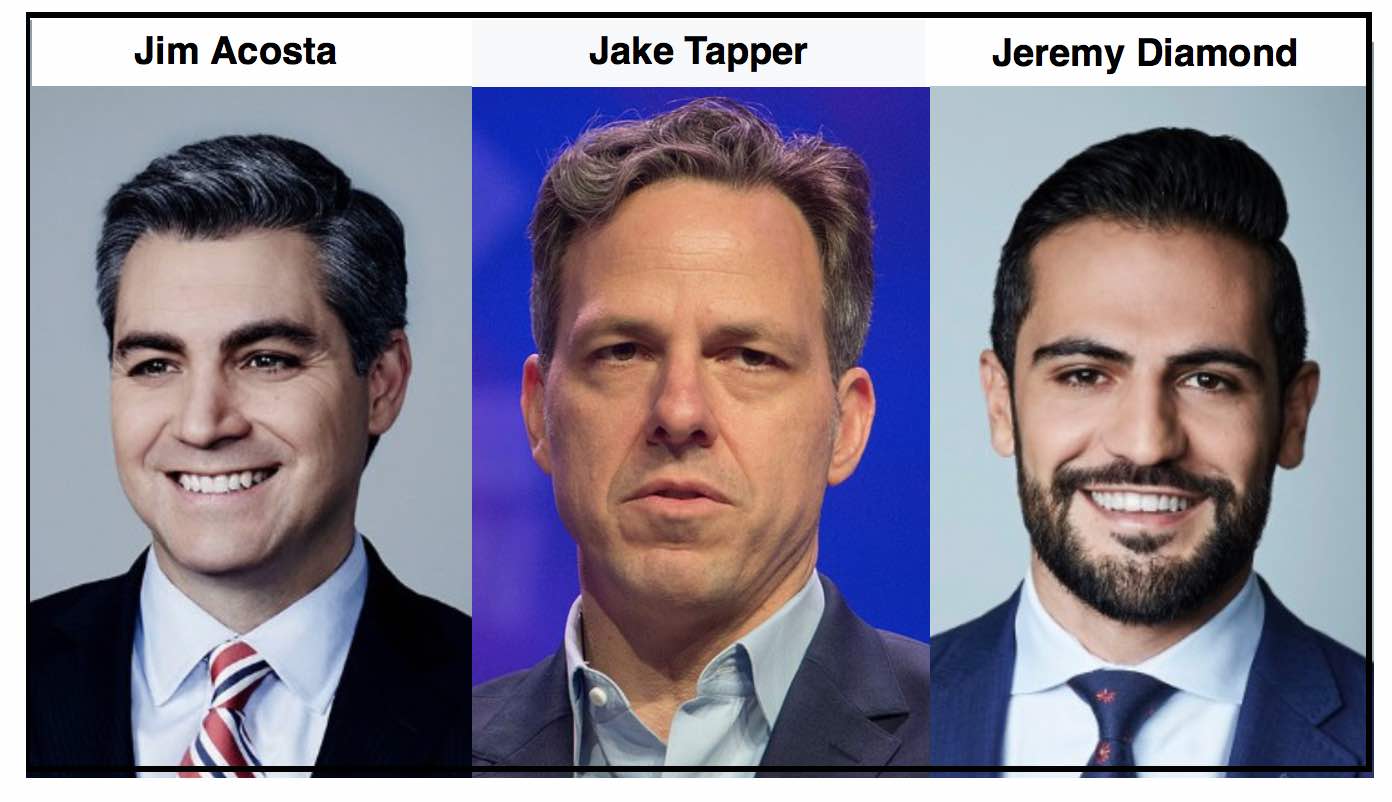 The second script flip came in Tuesday evening press reports relating to the Trump-Russia dossier. The Washington Post first reported it, and the Associated Press confirmed it later that evening (at 8:58 Eastern Time; link's time stamp is Pacific Time). Each dispatch relayed assertions — the Post, based on "people familiar with the matter," and AP based on "a person familiar with the situation" — that, in words seen at AP, "Hillary Clinton’s presidential campaign and the Democratic National Committee helped fund a political research firm that produced" the dossier.

Despite the already-flipped script — really "scripts," given that the dossier and the Uranium One deal are two separate scandalous matters — Acosta's theme made its way to Jake Tapper, who dutifully spent three minutes going after the White House for trying to "change the subject":

JAKE TAPPER: (Trump's involvement) is an unusual move, perhaps even rife with conflicts of interest for any president to instruct the Justice Department to take any action having to do with a case that involves a President's political opponents.

Constitutionally, it's obvious that Trump has the authority to do what he did.

Political opponents? Hillary Clinton, since she lost the general election in November and currently holds no political office of any kind, is no longer Trump's political opponent.  She is only a critic, with no more or less standing than Michael Moore or Lena Dunham. The same goes for former presidents Bill Clinton and Barack Obama, Eric Holder, Loretta Lynch, and (certainly in the Uranium One matter) James Comey. Investigating their activities and actions when they were in office or had the opportunity to influence those who were in office is therefore not a conflict of interest. If there is strong reason to believe that any of these now-private citizens committed crimes while they did hold political office, it's the government's duty to investigate and, if there is sufficient evidence, to prosecute. Otherwise, we're supposed to believe that anyone who has held a political office and then becomes a private citizen has a permanent get-out-of-jail card, regardless of what they did when they (ahem) "served."

Friday evening, an online CNN report by Jeremy Diamond also sang the same "flip the script" tune. The brazen falsehoods, blatant mischaracterizations, and deliberate omissions in his report would take a separate post to pick apart, but here are a few:

Trump, Republicans try to flip the script on Russia collusion

... Court documents connected with the case reviewed do not reference donations to the Clinton Foundation, nor attempts by US or Russian interests to influence the Uranium One deal decision.

So what? People involved in these matters are seldom so stupid that they leave direct tracks. As has been documented in many places, including at the hallowed New York Times, "the ultimate authority to approve or reject the Russian acquisition rested with the cabinet officials on the foreign investment committee, including Mrs. Clinton — whose husband was collecting millions in donations from people associated with Uranium One."

Republicans, who have spent months on defense amid allegations of collusion between the Trump campaign and Russia, jumped back into an attack posture.

For heaven's sake. It has not been difficult to play defense, given the following pattern: 1) Allegation made; 2) Allegation debunked with 24-48 hours; 3) New allegation made; 4) New allegation debunked within 24-48 hours; 5) Rinse and repeat ad nauseam. Meanwhile, thanks to this pattern of egregious media conduct, Trump and Republicans have been able to turn the entire "fake news" labeling game around and properly place it on the establishment press.

A White House official said Sanders was referring to the Democratic-funded dossier compiled by a former British intelligence official, which leveled allegations about Trump and his associates' ties to Russia ...

Diamond mentioned the Democratic Party funding. But he didn't name Christopher Steele, the "former British intelligence official." He also didn't mention or even allude to Fusion GPS, the "opposition research firm" — more correctly described, based on their history, as "a group of highly paid smear experts" — which Hillary Clinton and the DNC (through a law firm), and even the FBI after the election, hired and paid to create the dossier.

"Fusion GPS" is not named even once in Diamond's 900-word writeup.

How is that even possible?

Reporters should direct that question — and many others — to the obviously conflicted Evan Perez, and to CNN's editors and management. But they won't.