Three NewsBusters posts on Thursday documented attacks by far-leftists and members of the media on Trump administration Chief of Staff and retired General John Kelly's reaction that afternoon to Florida Democratic Congresswoman Frederica Wilson's accusation that President Donald Trump, during a private phone call to the widow of fallen soldier La David Johnson, "disrespected" him.

Not to be outdone, Masha Gessen at The New Yorker accused Kelly of using "the language of the military coup" — which Gessen seems to believe may have already been effectively accomplished, given her contention that Kelly has his job because "he was sent in to control the President."

In those NewsBusters posts, we've seen Kelly and his Thursday press briefing statement described by leftists and media hacks as that of a "nitwit," "odious" "coward," making "bizarre," "dishonest," racist remarks; as a racist who "Dehumanized" a "Black Woman"; and as someone who engaged in a "political stunt."

Those who couldn't imagine the attacks on Kelly becoming even more stuck on stupid vastly underestimated Masha Gessen.

Until very recently, based on her history, where this woman is coming from was hard to peg.

Though she appears to have been an ardent opponent of Russian President Vladimir Putin and his government in late 2013 just before that country hosted the 2014 Winter Olympics, her actions in September 2012 during a brief stint as director of Radio Liberty would seem to indicate otherwise (link added by me; bolds are mine throughout this post):

For over half a century, Radio Liberty (RL) has been a central part of the U.S. government’s efforts to support human rights and free expression in Russia and, before it, the Soviet Union. Today, tragically, Radio Liberty—or Radio Svoboda, as the Russians know it—is in turmoil, its Moscow-based staff decimated by deep cuts, and its future uncertain. And RL’s listeners are outraged. The damage done to a long-standing U.S. policy is profound.

... On September 20 and 21, without warning, over 40 of RL’s staff were summarily fired. The way this was done is what one would expect from the Soviet or Russian government. The staffers were blocked from entering their offices and escorted out by armed guards.

... the firings came shortly after the selection of a new head of the Russian service of Radio Liberty, Masha Gessen, a Russian American print journalist, the author of a biography of Putin, and gay and lesbian rights activist whom much of the controversy has centered on. Gessen, in her previous, short-term stint of Vokrug Sveta (Around the World), a semi-glossy magazine, had met with Putin just days before the firings took place, giving the impression that the Russian president had potentially exerted pressure on her.

Radio Liberty since appears to have regained its footing, stature, and influence, given that earlier this month, Putin threatened to treat it as a "foreign agent" in retaliation for perceived "unwarranted pressure on the U.S. operations of (Kremlin-funded broadcaster) RT."

Gessen left Russia for the U.S., settling in New York in late 2013 because she feared, with apparent basis, as the mother of three children adopted into a lesbian marriage, that the country's courts would take her oldest son away from her.

Gessen produced just two New Yorker columns this year between January 1 and October 3, but has suddenly posted four entries going after President Trump and his administration with a vengeance in the past ten days:

Here are her four specious "arguments" as to how Kelly's courageous, heartfelt response to Congresswoman Wilson (my opinion, obviously not hers) involves "the language of the military coup":

1. Those who criticize the President don’t know what they’re talking about because they haven’t served in the military. 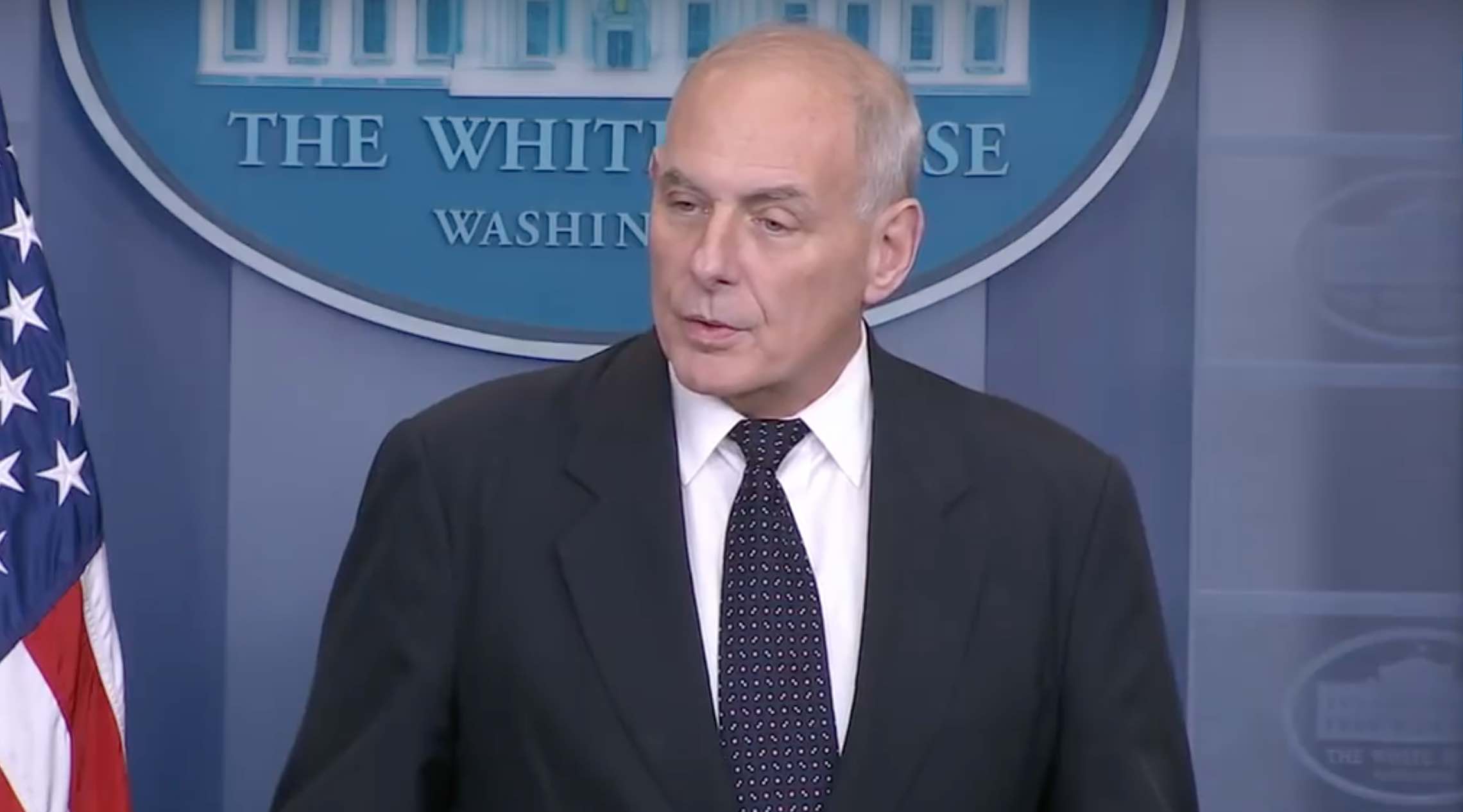 What Gessen wrote in her "argument" is not what Kelly said, which is as follows: "Most Americans don't know what happens when we lose one of soldiers, sailors, airmen, Marines, our Coast Guardsmen in combat." That is clearly true. Gessen's blanket claim about what Kelly said is false, given that men and women in the military have mothers, fathers, sisters, brothers, relatives, and friends who are heartbroken at the loss of their loved ones and are painfully aware of at least part of Kelly's description of "what happens."

In the process of making this "argument," Gessen made an ignorant and easily refuted statement:

The one-per-cent figure (people in the military cited by Kelly as "the best one per cent this country produces — Ed.") is puzzling. The number of people currently serving in the military, both on active duty and in the reserves, is not even one per cent of all Americans.

The link is hers, and it shows that she is being disingenuous. It tallies "1.3 million active duty military and more than 800,000 reserve forces as of 2016." A table seen at the Census Bureau shows that there were 200.2 million Americans between the ages of 18 and 64 in 2016. The 2.1 million total of active duty and reserve personnel is 1.049 percent of all conceivably eligible adults. That rounds down to Kelly's 1 percent.

Gessen then seemed to shift gears, trying to claim that Kelly's "1 percent" referred to all soldiers who have died in all wars in U.S. history. That's nonsense. Kelly was speaking in the present tense, referring to U.S. military personnel who are alive and serving their country.

2. The President did the right thing because he did exactly what his general told him to do.

Again, this is utter nonsense. At the press conference, Kelly specifically said he suggested that Trump not make the calls:

When I took this job and talked to President Trump about how to do it, my first recommendation was he not do it.

(But, since Trump chose to make the calls anyway, as is his prerogative,) well, let me tell you what I told him. Let me tell you what my best friend, Joe Dunford, told me -- because he was my casualty officer. He said, Kel, he was doing exactly what he wanted to do when he was killed. He knew what he was getting into by joining that 1 percent. He knew what the possibilities were because we're at war. And when he died, in the four cases we're talking about, Niger, and my son's case in Afghanistan -- when he died, he was surrounded by the best men on this Earth: his friends.

In other words, Trump as Commander-in-Chief made his own decision to make the calls, which, despite his initial disagreement, Kelly described as "brave." Once Trump decided to do so, he wisely sought and took the advice of someone tragically more knowledgeable than him about how to conduct them.

Gessen's choice to make an artificial issue out of all of this is beneath contempt.

3. Communication between the President and a military widow is no one’s business but theirs.

Gessen writes that "Myeshia Johnson had apparently voluntarily shared her conversation with her mother-in-law and Congresswoman Frederica Wilson by putting the President on speakerphone." She blew that description too. Wilson herself has stated that "(an) aunt and uncle, a driver and a military official" were present.

Did anyone tell President Trump about everyone else was on the call with Ms. Johnson? If not, why not?

This statement from Kelly would seem to indicate that Ms. Wilson's presence on the call was not disclosed, and that the congresswoman remained silent to make sure that was the case:

It stuns me that a member of Congress would have listened in on that conversation.

The Washington Examiner's Diana Stancy Correll reported Thursday afternoon that "Wilson was with her in a limousine and heard the conversation via speakerphone, and after discussing the call with reporters has clashed with the White House on just what was said." This would also seem to indicate that Wilson did not make her presence known.

Gessen contends that "(Kelly was) claiming that the President, communicating with a citizen in his official capacity, had a right to confidentiality." No he wasn't, but he certainly had a right to expect privacy in such a sensitive situation, to expect that call would limited to the widow and other loved ones and friends, if they happened to be present and identified their presence, and expect to be made aware of everyone who was listening in on the call.

4. Citizens are ranked based on their proximity to dying for their country.

Gessen's disingenuousness apparently knows no bounds. Here's what she claims:

At the end of the briefing, he (Kelly) said that he would take questions only from those members of the press who had a personal connection to a fallen soldier, followed by those who knew a Gold Star family.

(After a journalist apparently raised his or her hand) Okay, you get the question.

(After answering that person's question) ... Any other -- someone who knows a Gold Star fallen person.

Though we can't be absolutely sure, it would appear that if no one had raised their hand as being or knowing a Gold Star parent or sibling, Kelly would have taken questions from other journalists.

This has nothing to do with "ranking" citizens. Instead, Kelly, in his limited time, wanted to prioritize knowledgeable, intelligent questions. He's not the President's press secretary. Sarah Huckabee Sanders is, and one could argue that she should (but doesn't have to) give all journalists in the room a reasonable chance of asking a question. Kelly was under no obligation to give every person in the room a shot at asking a question.

Even after all of her misrepresentations and distortions, Masha Gessen never explained how any of this genuinely represents "the language of the military coup."

The funniest thing about preparing this post was The New Yorker's description of the quality of its reporting and prose found in a right-column promotion:

What a sick, elitist joke.