In addition to CNN, liberal activists, actors, journalists, and trolls disturbingly berated and maligned the character of John Kelly following his Thursday White House remarks, declaring him to be an “odious” “coward” and “nitwit” offering a “bizarre,” “dishonest,” and racist statement amidst the Gold Star family controversy.

Let’s take the CNNers who weren’t able to participate in the CNN Newsroom berating of Kelly immediately after he left the White House briefing room. 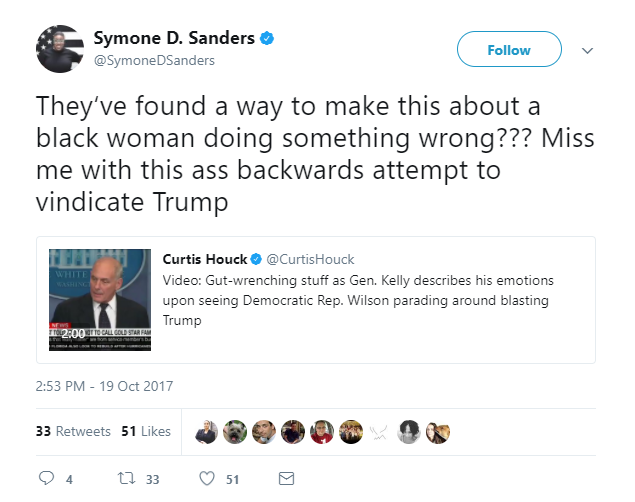 CNN national security correspondent and former Obama administration official Jim Sciutto also displayed his displeasure with Kelly, tweeting: “With due respect, on what basis do Gens Kelly & Mattis criticize the media for asking how & why 4 US soldiers were killed in action?”

Sense a pattern here? That sound you hear is the Obama administration and their friends in the media circling the wagons to attack Kelly and Trump. Former Obama staff and CNN political commentator Keith Boykin jumped in too: 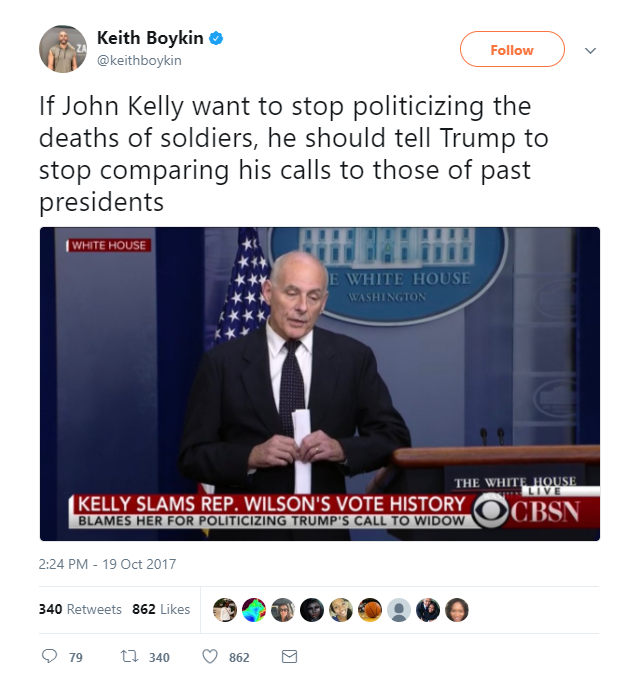 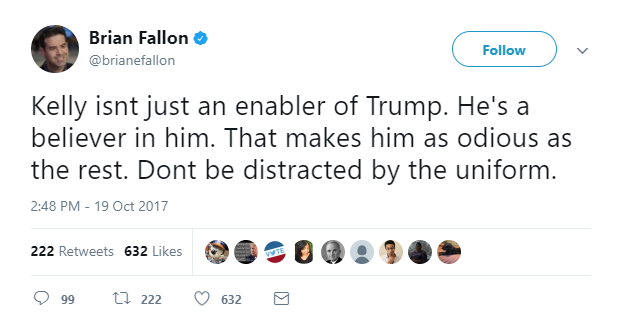 GQ writer Devin Gordon took more of a line that Sciutto did, being outraged that anyone (let alone a retired Marine Corps general) would criticize the media: 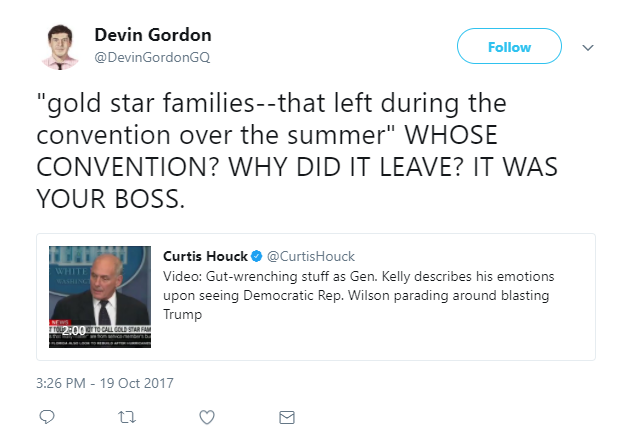 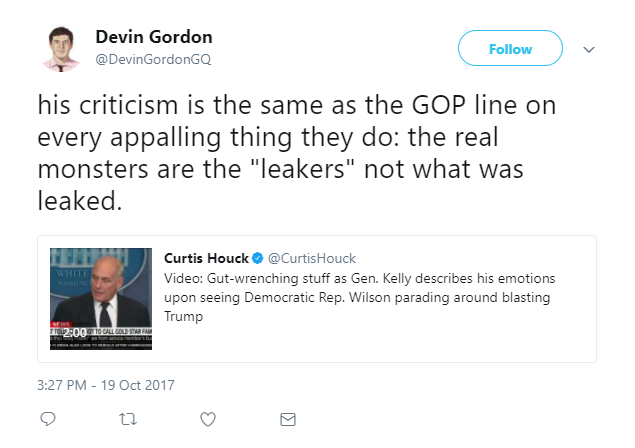 Arguably the most distasteful tweet came from failed MSNBC host Keith Olbermann (who currently hosts of GQ’s The Resistance. Olbermann noted that Wilson was a family friend of Sgt. La David Johnson, but he refused to stop there, referring to Kelly as a “collaborating, enabling nitwit.” So despicable.

Former Huffington Post personality Lance Gould also put on display the true colors of the far-left, tweeting out a fake quote of Kelly: 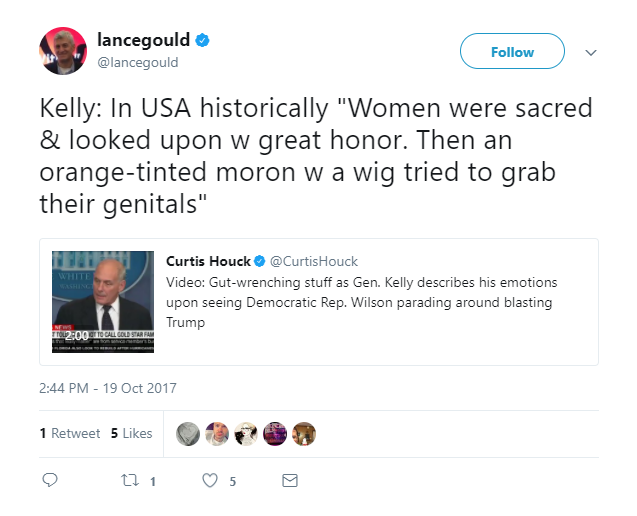 Toronto Star journalist and far-left darling Daniel Dale also brought up the relationship between Wilson and the Johnson family but, like Olbermann, he couldn’t end his comments there.

Instead, he lashed out at Kelly as having offered a “line of argument” that was “so bizarre” and making remarks that were “emotional” but also a “dishonest, probably effective attack on Rep. Wilson.”

Responding to a now-viral video tweet by this author, actress Vivicca A. Whitsett provided an NSFW tirade (who has since been blocked by her): 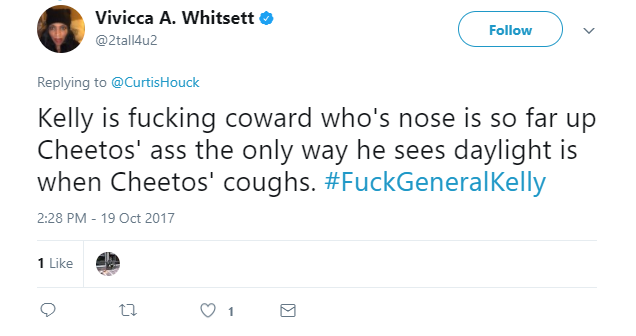 Artist Austin Vesely and actor J.D. Evermore did the same: 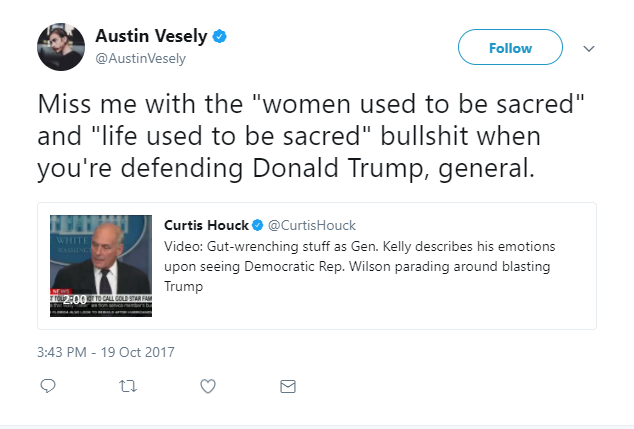 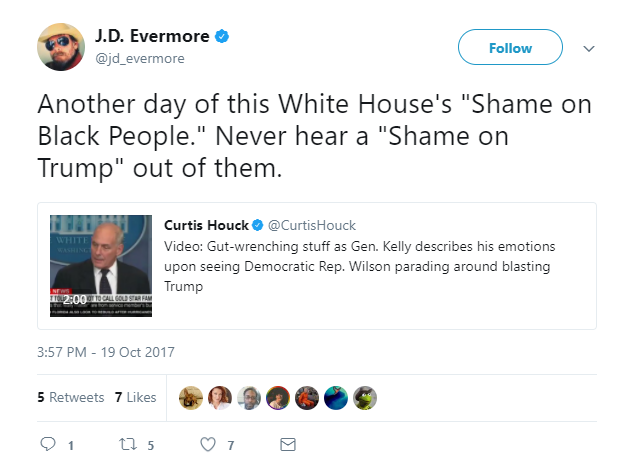 And those tweets were only small sampling of the venom out there for an American hero and treasure. Simply because of his political affiliation, Kelly was dragged through the cesspool of American political discourse.

So, the question that Kelly and so many others have asked in the past few months is this: Is there nothing left that’s sacred?

Well, after Thursday and the instant jump to attack Trump for something neither side has handled (as in the issue of Gold Star families), the answer has proved to be a depressing no.