On Wednesday, "the Cook County (Illinois) Board of Commissioners repealed the penny-an-ounce levy on sweetened beverages it passed last November."

The inflammatory "Big Soda" label appears frequently in press coverage of this reversal of what the government-always-knows-best crowd had thought was a major nanny-state victory, and reflects the fact that many in the media are quite unhappy with this turn of events.

The Cook County tax took effect on August 2, and will now go away on December 1.

The statement quoted in this post's opening comes from a report at the Chicago Sun-Times by Rachel Hinton. Within that article is a link to an "analysis" by the paper's Lynn Sweet headlined "Big Soda beats Bloomberg in Cook County tax fight."

It's difficult to pinpoint when "Big Soda" began to be seen as an acceptable label in supposedly detached, objective journalism. But the term, obviously coined and popularized to equate the consumption of sugary drinks with other evil "bigs" throughout corporate America (e.g., Big Tobacco, Big Oil, etc.), appeared frequently in the wake of Cook County's repeal, which includes the City of Chicago.

Sweet herself used the term in her content as well as her headline:

In the windowless fifth-floor Cook County Board chamber, Big Soda won a repeal of a despised beverage tax on Wednesday, a victory in Chicago with local and national implications.

For the sake of balance, the press should be calling Bloomberg Big Nanny, right?

One must also note that the taxes in Cook County, Philadelphia, and elsewhere, which are routinely described as levies on "sugary drinks," all have a far wider scope.

In Cook County, as an unbylined Wednesday Associated Press report noted, the tax applied "not just to soda, but also to sports drinks, iced tea, and lemonade, and comes on top of beverage taxes imposed by Illinois and Chicago."

In other words, these taxes are cynical money grabs dishonestly disguised as public health initiatives. Where's the evidence that sports drinks and iced tea lead to the obesity the health nannies claim they're trying to prevent? 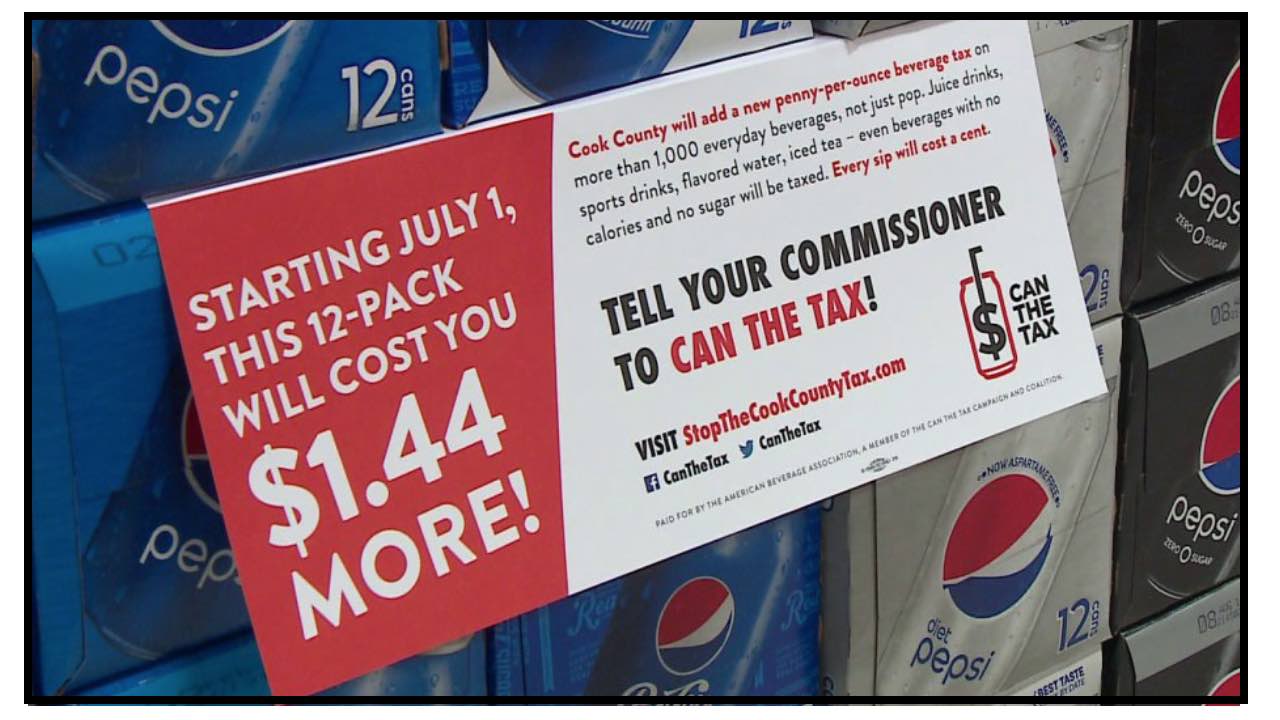 The fact is that "Big Soda" is also "Big Sports Drink" and "Big Iced Tea." These companies offer a wide variety of healthy and less than healthy beverage alternatives. The people who want to "drink healthy" can have the beverage of their choice, as can people who would prefer not to. The fact that so many alternatives are available, especially compared to 20-30 years ago, is a testament to the workings of the free market. But that's not good enough for the nanny-staters, who, when they can't directly apply force, try to bend people to their will by imposing financial penalties on those who won't follow their preferences.

At the Washington Post on Wednesday, Caitlin Dewey stuck with the misleading descriptions and labeling:

Sorry, Caitlin. As just seen, these aren't "soda taxes." They're "almost any kind of non-water, non-alcoholic drink taxes," and the "movement" is therefore not merely "anti-soda."

Now to a few of Dewey's paragraphs:

About two months after the country’s largest soda tax went into effect, embattled lawmakers in Cook County, Ill. — the home of Chicago — have decided to repeal it.

... It's a major victory for Big Soda, which has spent millions on ad buys, lobbyists and political contributions in the county. It's also the second blow this year to the soda tax movement, which suffered a defeat in Santa Fe, N.M., in early May.

... The measure was pitched largely as a means to plug a $1.8 billion budget gap, and secondarily as a means to improve public health by discouraging the consumption of beverages linked to obesity and other conditions.

... there were early signs that the soda tax might not raise the revenue advocates hoped, and certainly not on the intended schedule.

To avoid the penny-per-ounce tax, thousands of Cook County residents decided to buy their pop — and do the rest of their grocery shopping — in neighboring counties or in adjacent Indiana, costing Cook County grocers far more in lost top-line revenues than the tax could ever have collected. Ah, but they're all rich businesses. They can handle it, right? Wrong. AP reports that there were "complaints of plummeting sales from store owners." Oh, and let's not forget beverage companies' drivers, many of them longtime traditional Democratic Party union members, whose levels of income were also "plummeting" because their income depends on how much product they deliver.

The county's mismanagement of the rollout was epic. First, they tried to do what Philly has done and levy the tax at the distributor level. The problem is that this is illegal in Illinois.

Then they tried to make it a line-item tax on consumers at the checkout register. But they couldn't do that to every customer, because federal food stamp (i.e., SNAP) regulations prohibit the imposition of taxes beyond across-the-board sales taxes. So SNAP recipients — the very people who have been found in many studies to "overconsume" the allegedly problematic beverages — had to be exempted from the tax, while everyone else paid through the nose (or straw, if you will).

Even if implementation had been squeaky clean, the county's repeal appears to have marked a turning point in the dishonestly labeled "soda tax" wars.

In a late paragraph, the Post's Dewey tried to keep hope alive:

... But it's probably too early for Big Soda to gloat, experts caution. An analysis of the political and demographic climates in cities that successfully passed soda taxes, published in the journal Food Policy this year, concluded that as many as 40 percent of Americans live in cities with the right conditions to pass their own taxes. Those include external financial support and Democratic Party dominance.

An accurate translation of that paragraph would be: Democrat-dominated cities which are circling the drain seem ever more bound and determined to do so by imposing the widest possible variety of taxes — never mind how much they hurt the poor constituents they allegedly care about.

One could argue that the "right conditions" Dewey described were present in Cook County to a far greater degree than elsewhere, and that the idea of the "soda tax" was appealing to left-leaning residents — until it came time to start paying the tax.