The proactive, preemptive violence of so-called anti-fascists, aka "antifas," has gotten very light media exposure. It's fair to say that one big reason for this is the establishment press's reluctance to recognize or even report their violent and intricately planned attacks.

A months-long undercover investigation by Steven Crowder and his producer found ample evidence of antifas' premeditated determination to commit violence against those who merely express views they don't like. He also showed that local and national journalists deliberately walked away from the evidence he presented and have refused to recognize his work, even when corroborated in the presence of law enforcement authorities.

Crowder primarily works at the conservative subscription site CRTV.com. Among his colleagues in that enterprise are Mark Levin and Michelle Malkin.

The full 11-1/2 minute video is here, and really should be viewed in full.

This post will concentrate on the portions of that video showing journalists' obviously deliberate decisions to ignore the unsettling and scary things Crowder and his producer found.

In the first 96-second snip from early in the video presented below, Crowder gives viewers a glimpse of the deliberate refusal to get involved by a local Utah journalist in advance of a college campus appearance by conservative Ben Shapiro. He follows it up with a brief presentation antifas' violent philosophy, followed by stark examples of the press's extraordinary refusal to recognize it. Perhaps the worst take comes from Whoopi Goldberg of The View, whose unhinged "view" of the situation is transcribed below (bolds are mine throughout this post):

WHOOPI GOLDBERG: Antifa is one of those things that somebody came up with as a catch phrase so you could say, you known "Oh, there's violence on the other side."

Well, Whoopi, there is plenty of "violence on the other side," and it's not just a "catch phrase."

In the second, three-minute-plus clip which follows, Crowder's producer, working undercover, learned about one of the group's fallback tactics against people they wish to physically harm. After hearing of it, he had to find a way out of the situation. Fortunately, he was outside, and was alert enough to pretend that he needed to find a nearby bathroom.

Crowder then indicated that several of the people in the group they had infiltrated were arrested, and demonstrated how completely disinterested local and national media were in what they had found, even with law enforcement officials on hand to confirm what they had discovered:

ANTIFA PARTICIPANT: Last-ditch (strategy) is going to be to lure them down here — 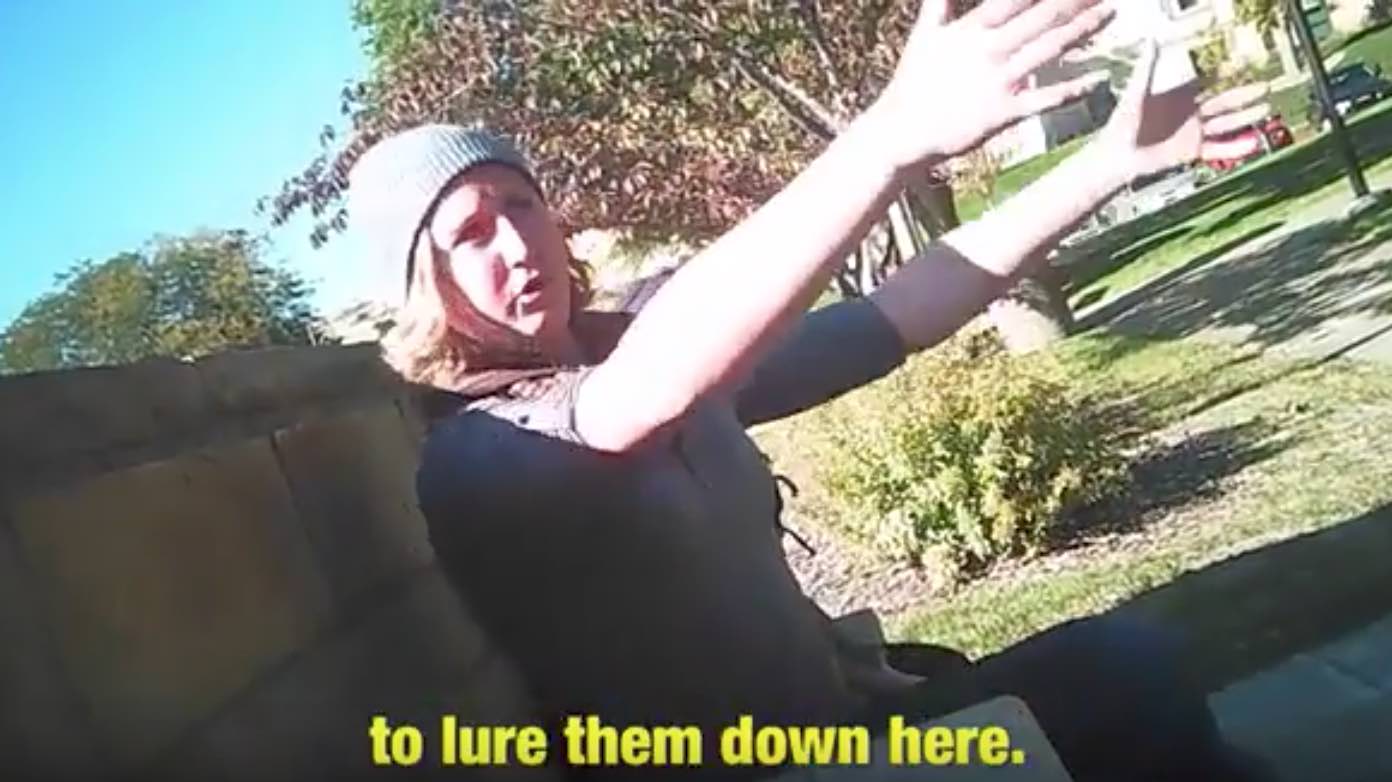 STEVEN CROWDER (interrupting the video): Whoa, whoa, whoa. Hold on. Luring people to their cars with sawed-off shotguns and handing out knives and shivs? This went far beyond a goof and we needed to get not-gay Jared (the producer working undercover) out of there.

Good thing the man's got a quick mind.

(back to the original video)

JARED: Is there a place to sh** around here on this campus?

ANTIFA PARTICIPANT: To the right.

JARED: I'll be right back. You guys going to be here in a few minutes?

CROWDER (again, narrating over the video): So at the risk of being called a snitch, not-gay Jared immediately turned the footage over to the authorities, who were already aware of our presence there, by the way.

It turns out they've been tracking this pansexual/transgender queer with an ax to grind for a while, and they were grateful for or footage.

The media, on the other hand, who you think would jump on a story like this, well, their response is what's most disturbing of all.

Crowder replayed the opening seconds of the first clip above with the local reporter, and expanded on the deliberate refusal to report by others (link to Dan Harris's bio at ABC added by me):

CROWDER: Yes, you just saw correctly. Even being shown the footage in the presence of police officers to confirm authenticity, they walked away.

Also, I should note, this is Dan Harris from Nightline, national ABC News. He knew about the footage and the whole story too. I offered it to him and asked for his (business) card. He did not give it to me.

We were delivering a story to local and national news on a silver platter, which included infiltration, violence, and exposing the roots of a national domestic terrorist organization. And no one wanted to give it even a glimpse? Not one person? It didn't even get mentioned (in news stories).

Crowder then shows how antifas were referred to as "protesters" by the same local reporter who walked away from the evidence Crowder presented. That reporter, Matt McDonald of Fox 13 News, also said on the air that the antifas were protesting "conservative" speaker Ben Shapiro. Crowder correctly pointed out that antifas they encountered routinely referred to Shapiro, who is Jewish, as a "Nazi."

Crowder then ran down the partially concealed identities of those arrested.

In the final 53 seconds of this second snip, Crowder summarized matters nicely:

CROWDER: Here's the thing. Antifa and its supporters are openly practicing violence. Worse, they plan it. They plan to escalate it, as you can see.

Now, if they call Ben Shapiro or me a Nazi, what does that make you? If they justify violence against somebody with, I don't know, an iPhone camera, what can they do to you?

But worst of all, why did it take a late-night podcast host and his producer to do this kind of journalism? Cryptic messaging apps, private groups handing out illegal weapons and planning tactics.

Do you mean to tell me that no one at ABC, NBC, CBS, CNN, with billions of dollars in resources could have done this? It took Steven Crowder and not-gay Jared to pull it off with some plane tickets and a couple of burner phones?

Sure, listen. Antifa is violent. They suck. We get it. Very violent.

But the fact that the media has never reported on any this begs the question: Are they complicit, is the media complicit with all of this, or do they just suck at their jobs?

It's reasonable to believe that the answer is that journalists are all too willing to "suck at their jobs" if doing so keeps knowledge of the true nature and degree of violent leftism away from most Americans.

Thanks to people like Crowder and many others, that fundamental element of the antifa strategy is not working as well as it used to.