On Tuesday, before Ben Shapiro's appearance at the University of California at Berkeley, Bari Weiss, a staff editor and writer in the opinion section at the New York Times, penned an op-ed accurately describing Shapiro's beliefs, defending his right to speak, and criticizing the "sloppy conflation" by leftist politicians and all too many in the press in trying to label all conservatives as "alt-right."

Howls of leftist outrage ensued at the Times and on Twitter. Two days later, a longtime reporter in the Bay Area proved Weiss's point.

The conservative Shapiro has become an A-list target of utterly irrational leftist hatred. His appearance at Berkeley on Thursday took place under heavy security as a result of the presence of so-called "anti-fascists" (antifas) who completely fit the genuine definition (not the Google definition) of "fascism" (especially the "forcible suppression of opposition") and who wished to disrupt and commit violence at the event.

Ms. Weiss works at one of the nation's most predictably liberal newspapers, and its editorials are all too often egregiously unhinged. For example, in June, after the shooting of Republican Congressman Steve Scalise, a Times editorial smeared former vice-presidential candidate Sarah Palin by asserting as an undisputed fact that her political action committee's crosshairs map was the "link to political incitement" in Jared Loughner's January 2011 Phoenix murder spree, an attack which also grievously wounded then-Congresswoman Gabby Giffords. (The Times "corrected" the editorial, but quite weakly, and Palin's name remains in it for those who insist that this long-discredited guilt-by-association blood libel has potential usefulness.)

That said, Weiss herself showed an independent streak in early August in an op-ed which sharply criticized the Women's March movement's "embrace (of) hate" with "some chilling ideas and associations." She wrapped things up by accurately speculating she would be smeared as "alt-right," and defied her oncoming detractors by stating: "If that puts me beyond the pale of the progressive feminist movement in America right now, so be it."

Weiss's Tuesday Shapiro op-ed also showed that she insists on accurate labeling and correct characterizations of individuals' positions and actions (links included are in original; bolds are mine):

A Political Conservative Goes to Berkeley

Ben Shapiro is a 33-year-old who supports small government, religious liberty and free-market economics and opposes identity politics, abortion and Donald Trump. He is, in other words, that wildly exotic creature: a political conservative.

You’d think that the cosmopolitan denizens of the San Francisco Bay Area would have encountered a few, if not in the form of an uncle at Thanksgiving, then perhaps in, I don’t know, a field trip down to Orange County. But to judge from the pre-emptive reaction to Mr. Shapiro’s speech scheduled for this Thursday at the University of California, Berkeley, you’d be mistaken.

... this sharp-tongued Never Trumper was also, according to the Anti-Defamation League, by far the most bullied Jewish journalist of 2016 — quite a distinction when you think about the kind of vitriol that gushed forth this past year on platforms like Twitter. Those attacks came from the alt-right ... 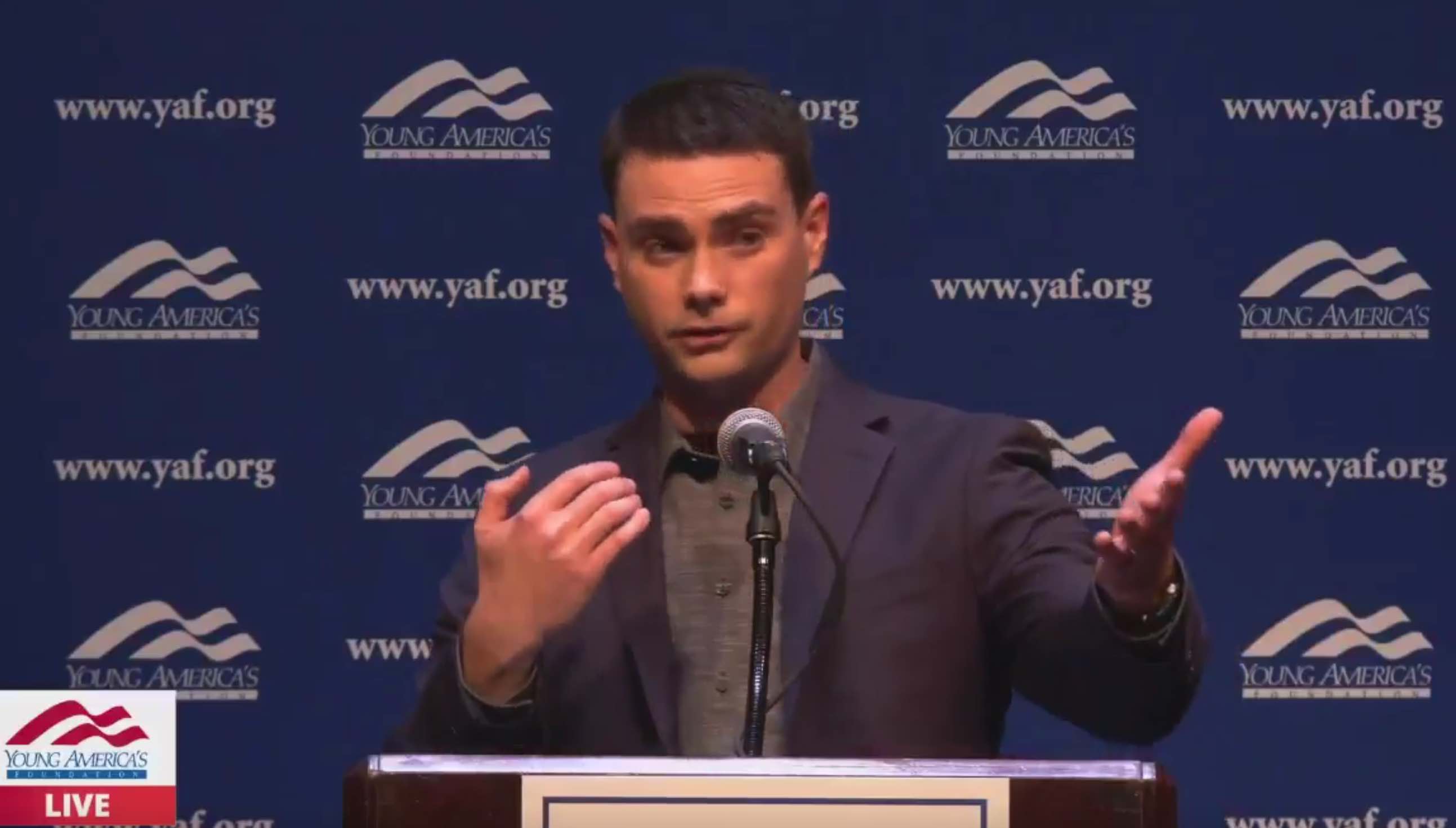 ... the brouhaha over Ben Shapiro is significant not because of what might go down Thursday at Berkeley, but because it is a perfect exhibition of a much broader phenomenon increasingly apparent in the wake of the Charlottesville, Va., demonstrations last month: the sloppy conflation between actual white supremacists and, well, run-of-the-mill conservatives, libertarians and classical liberals whose main beef is with some on the left who seem like they’d rather do without the First Amendment.

... (in late August) there were long-planned free-speech protests across the country that had nothing to do with that ugly demonstration. Liberty Weekend in the Bay Area was one of them.

The demonstration was organized by the leader of a right-wing group Patriot Prayer, Joey Gibson, who advertised the event this way: “No extremists will be allowed in. No Nazis, Communist, K.K.K., Antifa, white supremacist, I.E., or white nationalists. ..."

... Mr. Gibson had also assembled a list of speakers that included, according to the group’s Facebook page, only one white male. The others were Hispanic, black, Asian, Samoan and Muslim; two were women. Mr. Gibson himself is half-Japanese.

You wouldn’t have known any of this though, if you’d listened to news reports or politicians, as Matt Labash pointed out in his must-read essay about the event in The Weekly Standard.

Let's pause for just a a moment so that those having a hard time believing that anyone at the Times would describe anything in the Weekly Standard as a "must-read essay" can reach for the smelling salts ...

... Okay, we're back. After identifying House Minority Leader Nancy Pelosi and several other politicians, including Sen. Dianne Feinstein and San Francisco's current mayor, who engaged in opportunistic and irresponsible rhetoric against the Patriot Prayer group — Pelosi called the event “a white supremacist rally” before it took place — Weiss described what followed (links are in original):

In the end, however, the violence didn’t emanate from Mr. Gibson’s camp, but from antifa groups that showed up to kick some fascist butt. Meantime, Mr. Gibson said things like “moderates have to come together.” Strange words for an accused fascist. But when mainstream politicians are engaging in Reductio ad Hitlerum, should Mr. Gibson’s branding as such come as any surprise?

It's bad enough that "mainstream politicians" (disconcertingly but technically a true statement in the Bay Area regarding those just identified) are playing the "Hitler" and "alt-right" cards so casually. The press has also been doing it for almost two years now in association with anything having to do with Donald Trump. Now there's a determined effort, as Labash noted in that Weekly Standard essay, "to paint everyone to the right of Angela Davis as a dangerous racist lunatic."

Exhibit A: Weiss, based on the response to her August op-ed and the fiery reaction to her most recent column.

Exhibit B: Ben Shapiro himself.

As if on cue, two days after Weiss's op-ed and just ahead of Shapiro's appearance, Patrick May at the San Jose Mercury News, described as "an award-winning writer for the Bay Area News Group with the business desk as a general assignment reporter ... (with) 34 years in daily newspapers," wrote the following:

Berkeley is about to give conservative commentator, brainiac and podcast king Ben Shapiro a rousing heavy-security, loudly protested, home-of-free-speech welcome this evening when he comes to speak at Zellerbach Hall.

But like fellow alt-right showman Milo Yiannopoulos, who went from zero to 60 on the public-consciousness spectrum, many people have no idea who Shapiro is or what he stands for.

Promoting the idea that Never-Trumper Shapiro, who as noted is Jewish, is "alt-right," is exactly the "sloppy conflation" Weiss described, and especially out of line given that his worst attackers are "alt-right." In May's case, however, given his years of experience, it seems reasonable to argue that the "sloppiness" Weiss described was deliberate.

May's list of 17 things (he counted correctly from 1 to 16, but gave the last item Number 15; I kid you not) describing "who Shapiro is or what he stands for" includes the following:

11. He’s certain to set off angry and even violent protests this evening in Berkeley; protester Sunsara Taylor told the AP that Shapiro was part of a broader fascist movement in the United States emboldened by Trump’s election. “He’s a slick talking, reasonable sounding man,” she said, “but what he actually pushes forward is white supremacy, is misogyny.”

May somehow "forgot" to tell readers that the quoted Sunsara Taylor, in addition to obviously lying about Shapiro's political outlook, is no mere "protester":

Especially given the final point just made, blaming AP for the original sins of non-disclosure relating to Sunsara Taylor's background and outlook lets Patrick May off the hook way too easily. He either knows, or as a veteran reporter should have known, a lot more about Taylor than he was willing or able to tell his readers. Calling Ben Shapiro "alt-right" would appear to be a telltale clue that May was more interested in mislabeling Shapiro on the ideological spectrum than he was in genuinely informing his readers.