Monday evening, National Public Radio published a tweet about the Google-free speech controversy that raised eyebrows and brought on torrents of ridicule, namely that "some women at the company skipped work today, upset by the leaked memo" written by now-fired software engineer James Damore.

It turns out that the basis for the claim is so extraordinarily thin that it shouldn't have been reported.

On Twitter, the ridicule directed at female employees who allegedly stayed home in the tweet's 1,400 comments was fierce, especially in noting how the reported reactions essentially confirmed one of the premises in Damore's "Echo Chamber" document, namely that "Women, on average, have more Neuroticism (higher anxiety, lower stress tolerance)" (link is in Damore's original).

But did what NPR reported really happen?

The network's underlying article containing the claim by Bill Chappell and Laura Sydell reported this "news" in its third paragraph.

It turns out that the sole source for the claim is a former Google employee:

Another software engineer who used to work for Google, Kelly Ellis, says some women who still work at the company stayed home Monday because the memo made them "uncomfortable going back to work."

Five paragraphs later, readers learn that Ellis hasn't been with the company for roughly three years, and that she has an axe to grind:

... Ellis said she left Google in 2014 after she was sexually harassed. When she read the leaked document, it didn't surprise her "because I saw similar language when I was at Google being shared on internal message boards and other different internal forums." 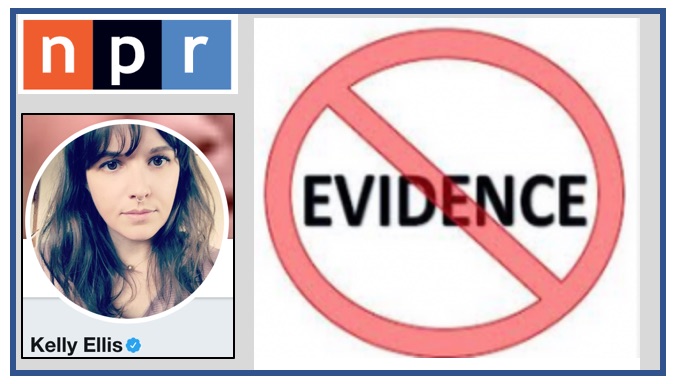 Ellis said although he isn't a manager, the "manifesto" author's opinions directly impact his female peers. "The main input to Google's performance review process, which is how they slot engineers, which determines pay — the main input to that is peer review," says Ellis. "It's your peers writing feedback on your work."

... In April, a Department of Labor official accused Google of practicing "systemic" discrimination against female employees.

There is no evidence that NPR spoke or communicated with any female Google employee who stayed home, or with any Google supervisor or manager who could have confirmed that any female employees stayed home.

A bit of research indicates that Ellis has been quite vocal about the reasons for her 2014 departure, and claims to somehow have deep knowledge of what's going on at the company, even three years after she left:

Ellis may very well be telling the truth, but NPR's failure to interview, even anonymously, any actual women employees who skipped work on Monday means that the network should have considered her contention a rumor.

There appears to be another motivation to report this rumor.

In early January, the U.S. Department of Labor, in what it described "as part of routine audit of a federal contractor," sued to force the company "to provide requested compensation data and documents for the multinational company’s Mountain View headquarters." In April, DOL, as seen in the NPR excerpt above, further claimed that it had somehow determined that the company had "systemic compensation disparities." In late May, in a "you can't make this up" response, the company refused, claiming in a court filing that that the highest of high-tech companies would somehow need 500 hours and $100,000 to fulfill the agency’s request. (Even if true, which seems highly doubtful, the cost involved is minuscule compared to the $19.5 billion in 2016 profit reported by the company's Alphabet Inc. subsidiary.)

The point is that reporting what many have described as the "snowflake" reaction to Damore's document appears to anecdotally support the notion that Google has a workplace environment which is hostile to women. The NPR reporters surely know this.

But regardless of how it does or doesn't advance particular agendas, is NPR's sole reliance on someone who left the company in 2014 justified?

Althouse explained herself on Wednesday, while noting the intense irony of how Ellis's NPR-carried claim supports the un-PC contentions Damore made in his "Echo Chamber" document:

Did Google women stay home from work because they were upset over the Damore memo?

... I wonder how Kelly Ellis knows what women in her former workplace did and why they did it.

... Why did NPR speak with Kelly Ellis and why did NPR not talk to any of the women whose actions and emotions it is portraying? If I had to guess, I'd say it's because Ellis said something that NPR believed fit very nicely into the story it wanted to tell, and it either didn't bother to check more deeply or it tried and couldn't find these women but still thought the idea was too good not to use. Again, NPR is in a cocoon if it didn't see how this fact/"fact" would be used by those who want to say there's no real problem of gender discrimination in the tech industry.

... I'm going to answer my question in the post title: No. It's a myth, an urban legend.

... You need to be skeptical about things that fit your template. Those who are accepting this report at face value and using it to support the idea that women really are emotional and ill-suited to a high-pressure workplace are engaging in the same kind of cocoonish behavior that we're seeing from NPR.

My take is that Kelly Ellis may be telling the truth, but her claim is unproven. As such, regardless of who it helps or hurts, NPR should not have reported it.