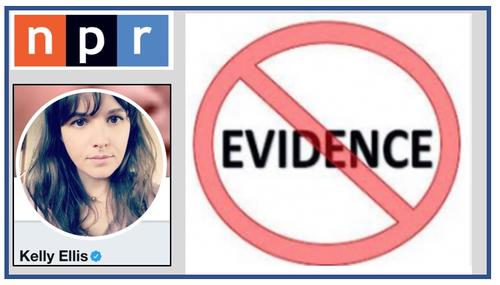 Tom Blumer
August 10th, 2017 3:39 PM
Monday evening, National Public Radio published a tweet about the Google-free speech controversy that raised eyebrows and brought on torrents of ridicule, namely that "some women at the company skipped work today, upset by the leaked memo" written by now-fired software engineer James Damore. It turns out that the basis for the claim is so extraordinarily thin that it shouldn't have been reported.

Tim Graham
May 28th, 2010 12:07 PM
NPR’s All Things Considered aired a long report on Thursday night on nasty Internet commenters – but reporter Laura Sydell’s examples centered on anti-Obama and anti-Muslim commenters (including one who wanted Obama shot), and no one from the left (like the Huffington Post people regretting Cheney wasn't shot in Afghanistan). She began with a sympathetic sick family that favored ObamaCare: LAURA…