On Friday, the United Auto Workers failed in yet another attempt to organize an auto plant in the South. This time it was a Nissan plant in Canton, Mississippi. Unlike in the 2014, when workers at a Chattanooga, Tennessee Volkswagen plant narrowly rejected the union, Friday's result was a 62 percent to 38 percent shellacking.

Coverage of the UAW's defeat at the Associated Press overnight was reasonably measured, with one exception: a barely mentioned and completely unexplained Fiat Chrysler-UAW corruption scandal in Metro Detroit which influenced the voting.

Reporter Jeff Amy's dispatch shortly after midnight Saturday morning (also saved here for future reference, fair use, and discussion purposes) first mentioned it, though quite cryptically and quite late in his report (bolds are mine throughout this post):

Workers at a Nissan assembly plant in Mississippi have voted against forming a union, adding to decades of futility by United Auto Workers organizers at foreign-owned auto plants in the American South. 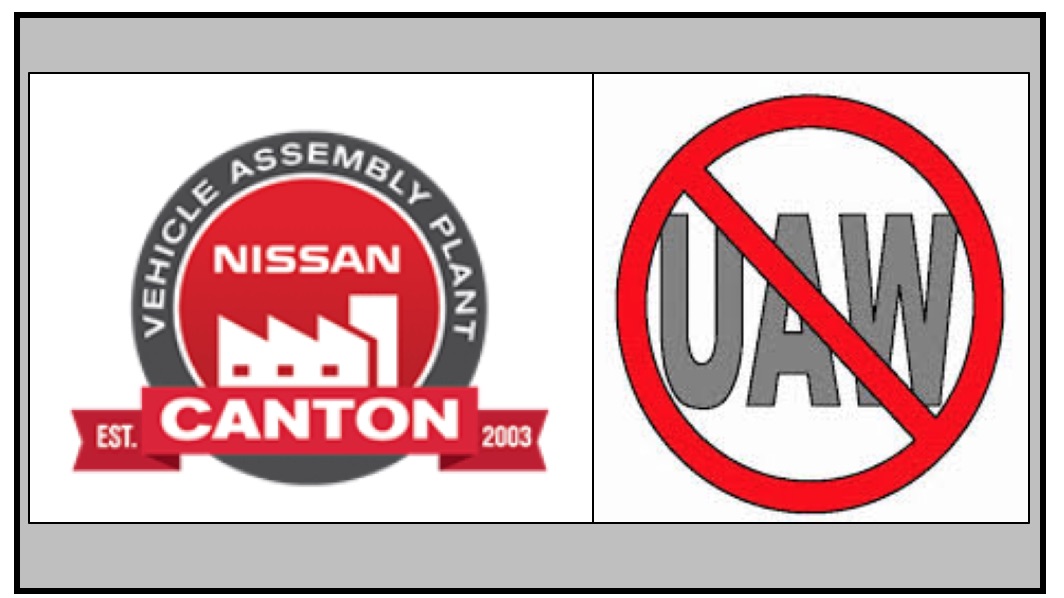 Representatives of Nissan Motor Co. and the UAW said late Friday that 2,244 workers, or 62 percent, voted against the UAW, while 1,307, or 38 percent, favored the union.

... The UAW has never fully organized an international automaker in the traditionally anti-union South, although it did persuade some maintenance workers to join at a Volkswagen AG plant in Tennessee. The UAW's lack of influence among southern auto workers has reduced its bargaining power when Detroit automakers lose market share and close plants.

Let's stop there for a moment. Amy's observation is spot-on, and is rarely mentioned by those covering the industry.

Year-to-date figures released earlier this week through July show that the combined market share of the "Detroit automakers" — General Motors, Ford, and Fiat Chrysler — has been only 43.9 percent, down from 47.1 percent during the first seven months of 2011. The three companies' market share in July alone, at 41.9 percent, was even worse, meaning that the the combined downward slide during the past several years continues. Given the union's track record at companies whose workers it represents, it seems quite reasonable that Canton, Mississippi's workers would resist the UAW's organizing efforts.

The union isn't handling the loss well, and appears to be willing to engage in scorched-earth tactics to punish Nissan. The AP's Amy, whose journalists are represented by the News Media Guild union, almost appeared to be egging them on:

... UAW Secretary-Treasurer Gary Casteel had telegraphed the move (complaining to the National Labor Relations Board) Monday, when he alleged illegal activity by the company.

"Despite claiming for years to be neutral on the question of a union, Nissan waged one of the most illegal and unethical anti-union campaigns that I've seen in my lifetime," Casteel said in a statement Friday.

... The union also could try to encourage a backlash against Nissan outside the United States, where it has tried to build pressure on the company through unions at other plants and supporters in the French government, which owns nearly 20 percent of the Renault Group, Nissan's business partner. The union said it would "educate" the French government about Nissan's anti-union campaign.

Amy eventually inserted the following cryptic sentence relating to the corruption scandal into the 25th of his 27 paragraphs:

Kristen Dziczek of the Center for Automotive Research said that although the UAW was the underdog, odds were unlikely to improve soon, as President Donald Trump's appointees take over the National Labor Relations Board. A corruption scandal involving union employees allegedly taking bribes from a former Fiat Chrysler executive also threatened to spread.

That final bolded sentence also appears in the eighth paragraph of a story at APnews.com: "UAW defiant in Mississippi loss as union opponents celebrate."

The scandal involved is a real doozy. It received initial wire service coverage when it first broke on July 26. Here are the first five paragraphs of the AP's report that day:

A former Fiat Chrysler executive was charged Wednesday with looting a training center for blue-collar workers by giving $1.2 million through a variety of ways to a UAW leader, his wife and other senior union officials.

The indictment describes a multiyear scheme to reward Holiefield and Morgan with first-class travel, designer clothing and jewelry. A $262,000 mortgage on their home in suburban Detroit was paid off, according to the grand jury.

Iacobelli treated himself to more than $350,000 for a Ferrari, the government alleged.

The "indictment exposes a disturbing criminal collaboration that was ongoing for years between high ranking officials of FCA and the UAW," said David Gelios, head of the FBI in Detroit. FCA is Fiat Chrysler Automobiles.

Since then, the scandal has received almost no other press attention outside of Metro Detroit. Its tentacles appear to be spreading, though they still seem to relate only to Fiat Chrysler, as seen in the following story update at the Detroit Free Press on July 31:

A former United Auto Workers official is under investigation and a potential target of the FBI probe into a multimillion-dollar conspiracy within the top ranks of Fiat Chrysler Automobiles NV and the union, The Detroit News has learned.

Retired UAW Associate Director Virdell King has hired a criminal defense lawyer amid questions about personal purchases made through a UAW-Chrysler National Training Center credit-card account, according to two sources familiar with the investigation. The training center funds are supposed to benefit blue-collar workers.

The focus on King provides a partial roadmap of additional people who could be charged in a high-profile criminal case that alleges FCA and union leaders spent more than $1.2 million on luxury items instead of using the money to benefit training of Fiat Chrysler hourly workers. The indictment references, but does not identify, a handful of other union and automaker officials accused of participating in a scheme to pay off UAW officials.

Though AP didn't directly note it, Nissan leveraged this scandal in making its case to Canton, Mississippi plant workers, essentially arguing that a UAW with corrupt leaders and poor internal controls can't be trusted to represent their best interests. That's a reasonable argument to make, but it leaves open what Amy and the AP mean in by "threatened to spread."

Do they mean that the scandal may spread beyond Fiat Chrysler to include executives and UAW representatives at other companies, or even UAW leaders at the very top?

On the one hand, it's a wonder that Amy and the AP mentioned the scandal at all. But since they did, they owed readers a lot more than a cryptic, vague, and completely uninformative sentence.

Their treatment makes one question what they know that they won't tell us.