Longtime blogger and particularly effective Time critic Tom Maguire had this succinct but understated take: "He (Peters) paints with far too broad a brush and inevitably splashes paint on himself." I'd say the Times reporter is swimming in the type of paint which can't wash off. This effort should permanently peg Peters as a shameless, unapologetic propagandist.

Peters' premise is that so many conservatives have "reverence" and "veneration" for Putin that they are effectively giving President Donald Trump's allegedly nefarious dealings with the Russian leader and his country a pass on that basis. Even in the context of the media's all-consuming Trump-Russia obsession, this is an especially pungent, steaming pile of horse manure.

In a tweet Peters posted after a pollster criticized him (HT Twitchy) for fabricating the idea that conservatives in general have had a long-standing "reverence" for Putin — a position absolutely not supported by polling history — the reporter wants us to believe that what he has published is definitive and irrefutable:

Peters clearly has a hard time with basic math.

His writeup has a dozen names (besides Trump). But only seven of them were specific examples of individuals describing Putin with alleged "veneration."

Here is the complete list of every single person except Donald Trump himself identified as having input into Peters' pathetic prose (alleged Putin admirers bolded):

Maguire nailed down four of them: Giuliani, MacFarland, Palin, and Limbaugh.

Let's look at how pathetic bordering on pathological Peters was in criticizing Giuliani:

Putin decides what he wants to do, and he does it in half a day,” Rudolph W. Giuliani, the former New York mayor and longtime friend and adviser to President Trump, gushed in 2014.

The reporter's link is to a YouTube video from a Rachel Maddow MSNBC broadcast. It shows that Giuliani was criticizing President Barack Obama's decision-making sloth, in the process noting that Putin, unlike Obama, wasn't a serial ditherer. Maddow dishonestly claimed that the former Gotham mayor was "rallying around the Russian flag."

But as Maguire noted, the full interview transcript shows Giuliani observing that Obama's dithering forced him to go to Putin for a bailout in Syria:

Giuliani was not displaying "veneration" for Putin. He was making an unfortunately accurate observation that the bad-guy Russian President, whom he referred to later in the interview as a "bully," knew how to lead, while the alleged leader of the free world clearly did not. 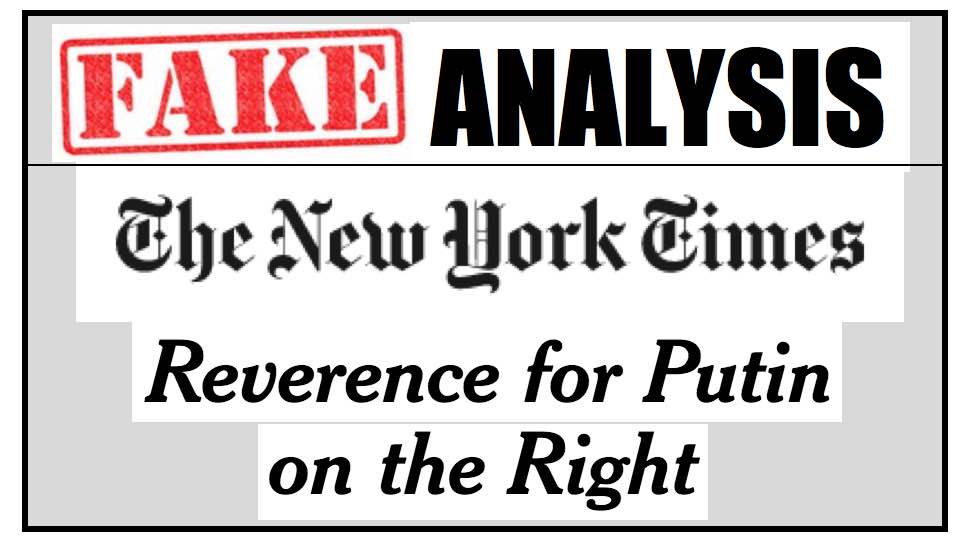 Concerning the three others Maguire did not get to:

Thus, contrary to Peters' tweeted assertion that he provided a "dozen" examples, he provided only seven, and none of them are even remotely in the neighborhood of the "veneration" described in the following paragraph:

... The veneration of Mr. Putin helps explain why revelations about Russia’s involvement in the election — including recent reports that members of Mr. Trump’s inner circle set up a meeting at which they expected a representative of the Russian government to give them incriminating information about Hillary Clinton — and Mr. Trump’s reluctance to acknowledge it, have barely penetrated the consciousness of the president’s conservative base.

Thus, if Peters, as he claims, has "many, many, more examples" which are similar to these, it's fair to contend that he has absolutely nothing.

In this Times reporter's view, millions upon millions of Americans don't care about "Russia’s involvement in the election" — in reality because it has yet to be definitively demonstrated, and which, even if it did exist, did not affect actual balloting — not because it has so far been the mother of all nothing-burgers, but because of the "veneration of Mr. Putin." It seems inconceivable that anyone, especially a journalist who covers politics, could be so delusional and utterly divorced from reality, but Jeremy Peters has managed it.

It would appear that Peters is either so convinced of his righteousness that he can't appreciate how fundamentally dishonest his effort is, or he knows exactly what he's doing and doesn't care.

Regardless of the reporter's motivations, the fact that his utterly fake analysis got past his editors at the Times means there might as well not be any. If drivel like this is the new standard of what's allowed through, Dean Baquet, the paper's Executive Editor, who is laying off or buying out roughly half of the paper's 100 copy editors in a downsizing move, should relieve them all of their duties.