On Sunday in London, CNN's Becky Anderson and an accompanying camera crew were captured by another videographer appearing to stage an anti-ISIS protest by a small group equipped with printed signs.

CNN has denied staging the event, claiming that it "simply filmed" those involved, but it's clear that the affair was at the very least quite orchestrated and agenda-driven.

Let's work backwards from the CNN report which aired as a result of the alleged staging. Here it is, narrated by Anderson:

BECKY ANDERSON, CNN: What I want to show you now is, viewers, is a wonderful scene.

And these are Muslim mums, and the little fella here and his poor little sign. And this is in commemoration, you can see his little sign: "To the heroes of London."

There are flowers on the streets here, Ladies with (signs reading) "#TURNTOLOVE"; "#ISIS=ENEMIES OF ISLAM"; "#ISIS WILL LOSE"; "#TURN TO LONDON" (actually says "#FORLONDON" — Ed.)

And I think a poignant scene, and a scene we should sit on just for you viewers to understand exactly how people feel here on the streets of London so close to what were such brutal attacks last night.

Given the size of the group and the lack of interaction, one has to wonder how CNN even found out about it, and why the network put in the effort seen below to orchestrate the scene for presentation to viewers:

Clearly, the protesters were being moved into place so that the cameras could take a group shot.

CNN "rebuttal" seems to actually describe what many people would consider the very definition of "staging":

This story is nonsense. The group of demonstrators that was at the police cordon was being allowed through by officers so they could show their signs to the gathered media. The CNN crew along with other media present simply filmed them doing so.

CNN's Brian Stelter predictably chimed in with a pair of tweets claiming that "Far-right twitterers are misleading folks," and that "CNN, BBC, AP 'simply filmed them.'"

The Associated Press used a photo from the "protest" to promote a story about hospitality provided to those who were stranded by post-attack police containment efforts.

British reporter KT Hopkins claims that "(the) Same group" was seen in "Multiple locations," and asked if "this group (was) for hire."

I don't know if this is "staging," but it does seem like coordination between CNN and the "protesters," rather than pictures of a spontaneous protest. It seems like a show put on only to be photographed by CNN, with CNN providing cinematography expertise -- maybe not "staged," per se, but it sure looks stage-managed.

Would CNN help protesters of any right-wing cause set up their shot for maximum viewer impact?

This may well show a genuine, real sentiment being expressed by the protesters -- but it also shows CNN coordinating with them not to show an actual, organic protest, but to artificially set up a specific message that both CNN and the protesters want on TV. 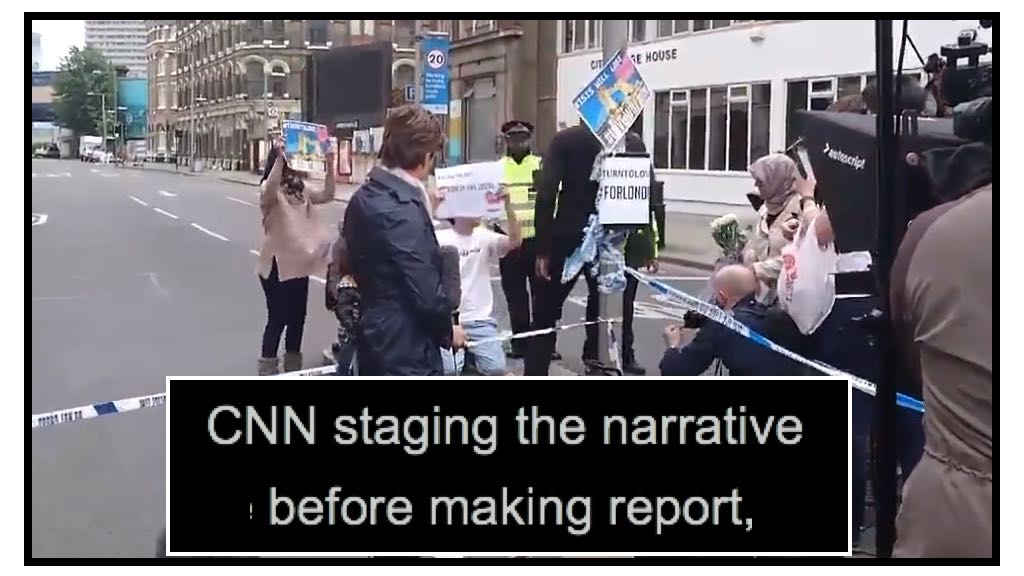 From all appearances, CNN and Anderson went out looking for support for a specific message, namely some evidence, any evidence, that London's Muslims were genuinely outraged by the attacks.

Any doubt as to whether that's the case will be erased once one sees Becky Anderson's two-minute angry rant posted on her own Twitter account. It apparently aired sometime Sunday on CNN. In its final 15 seconds, she offered up the "hashtag" signs mentioned earlier held up by individual Muslim protesters as examples of "who we are, and that is what you (terrorists) will never stop." Anderson never explained how hashtags are supposed to overcome people determined to kill others.

That what readers have seen here is apparently all the visible Muslim outrage CNN could find, despite its strenuous efforts — staged, stage-managed, orchestrated, or not — appears to send a message completely the opposite of what Anderson and her network wished to convey.