Seth Borenstein's Saturday dispatch at the Associated Press on how it "Doesn’t look good for Earth" if the United States under President Trump "quits" the 2015 Paris climate is about as fakey as fake news gets. It's also sloppy and inconsistent in its terminology, and misleading about the nature and timing of what former President Obama's pledge would require the U.S. to do — while letting expanding greenhouse gas emitters like China off the hook.

Borenstein started with the following utterly unsupported statement and presented it as if it's a virtual certainty: 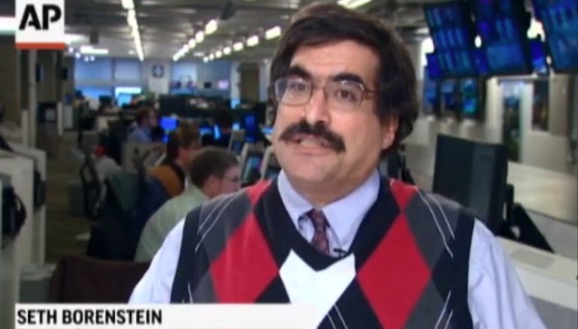 Earth is likely to reach more dangerous levels of warming even sooner if the U.S. retreats from its pledge to cut carbon dioxide pollution, scientists said. That’s because America contributes so much to rising temperatures.

Borenstein also falsely stated that "nearly every nation agreed to curb its greenhouse gas emissions." No they did not all "agree" to do so. Many "pledged" to do so, but as will be seen later, some didn't have to pledge to do anything at all.

By making a non-binding pledge, President Barack Obama was able to claim that he wasn't signing a treaty, and that he therefore didn't need the otherwise impossible approval of a two-thirds majority of the U.S. Senate.

The most obvious reason that the AP reporter's claim about CO2 is unsupported is that, as seen in this chart obtained from a brilliant video presentation by Bill Whittle, in 4.6 billion years of the earth's history, there has been no demonstrated connection between rising CO2 levels and rising temperatures:

We could end there, but there are two other key layers to dissect.

Even if one concedes belief in the CO2-global temps correlation fantasy, one would be hard-pressed to prove that "America contributes so much to rising temperatures," and especially hard-pressed to show that keeping President Obama's (not America's) Paris pledge would have a meaningful impact on global temperatures.

Borenstein's choice to limit the opening of his presentation to carbon dioxide when the Paris agreement clearly concerns "how far ... (countries) intend to reduce their greenhouse gas emissions" seems odd at first, but it may have been based on a desire to mislead, or at least confuse.

That's because U.S. emissions of greenhouse gases other than carbon dioxide have been flat as a pancake for — get this — the most recent 25 reported years, while carbon dioxide emissions have risen by only about 10 percent during that period, and remain below their 2007 peak:

By focusing only on CO2, Borenstein avoided the inconvenience of telling readers that the U.S. is not in any way a major offender in connection with increasing emissions of other greenhouse gases. More importantly, he also avoided telling readers that Obama's greenhouse gas reduction promise would appear to require impossibly steep CO2 reductions.

As to CO2, a chart accompanying Borenstein's writeup predicts that the world will be 0.54 degrees Fahrenheit (about 0.3 degrees Celsius) hotter in 83 years only because of increased U.S. carbon emissions if it "retreats" from its Paris climate pledge:

Really, Seth, is that all?

We're supposed to figuratively and literally sweat over a 0.0065 degree Fahrenheit (.0036 degrees Celsius) per year impact on worldwide temperatures being projected by models which couldn't even predict the current 19-year warming hiatus?

As seen above in his opening. Borenstein said that the U.S., i.e., really only President Obama, pledged to cut "carbon dioxide pollution," but didn't bother to give readers the details of that pledge. Here they are:

Oh, wait. It's all greenhouse gases.

Thanks for not letting us know, Seth.

Since the non-CO2 gas emissions have been and probably will remain steady, the U.S. essentially has eight years to achieve all of its promised reductions in CO2 alone.

What does that mean? Referring to the second chart above, it means that:

Such reductions in eight years could not conceivably be achieved without massive reductions in industrial and commercial activity, vehicle use, and the use of heating and air conditioning. The economic dislocations and mandated standard of living reductions would be staggering. Whole industries would be wiped out. Those which remain would be unable to produce what consumers want. Hyperinflation would seem to be unavoidable.

Obamacare defenders are fond of falsely warning that reforming it in any way, shape or form would kill people. Even if the numbers they quote are true (which they aren't), they would pale in comparison to the death and destruction wrought by meeting Obama's Paris pledge.

Even as Obama unilaterally pledged to make these draconian reductions, China, which just a decade ago passed the U.S. in greenhouse gas emissions but is now emitting twice as much, has only pledged to "A peak in carbon dioxide emissions by 2030, with best efforts to peak earlier." That means that China need take no meaningful actions for the next 13 years, and actually gives it the incentive to shoot for as high a peak as possible, i.e., to figure out a way to emit the highest possible volume of greenhouse gases for the next 13 years. As a commenter at my home blog observed: "No amount of reductions by the US will ever offset the (emissions) increases in China." One cannot help but believe that the Paris accord is in reality a grandiose plan to punish currently prosperous nations, especially the U.S., using environmental alarmism to give it a veil of respectability.

What kind of foolishness is this? The answers (and, apparently, Trump's answers) are: Irresponsible, thanks to Barack Obama; and unreported, thanks to people like the AP's Borenstein.