The Associated Press, PolitiFact, CNN, Snopes and all of the other "fact-checkers" should be busy this weekend and well into next week vetting the howlers contained in Rebecca Traister's New York Magazine Friday afternoon interview of a politician who has been in the public eye for decades. But it's a virtual lock that they won't bother, because the person Traister interviewed was Hillary Clinton.

Mrs. Clinton's montage of mendacity is virtually guaranteed to escape the scrutiny of "fact-checkers" because, as I noted at NewsBusters in mid-April, they "overwhelmingly select facts presented by Republican and conservative politicians and pundits, while ignoring similar howlers generated by the left."

In the interest of brevity, this post will only flag Mrs. Clinton's three tallest tales.

During the 2016 campaign, Mrs. Clinton and her minions, with aggressive leftist media support, treated Donald Trump's refusal to unconditionally say that he would accept the results of the election as "a direct threat to our democracy." I guess Trump was supposed to say, "Oh sure, I'll accept the results, even if it's been shown that you cheated in the general election like you and your party did during the primaries."

This brings us to our first pantsuit-on-fire New York Mag interview fact check: 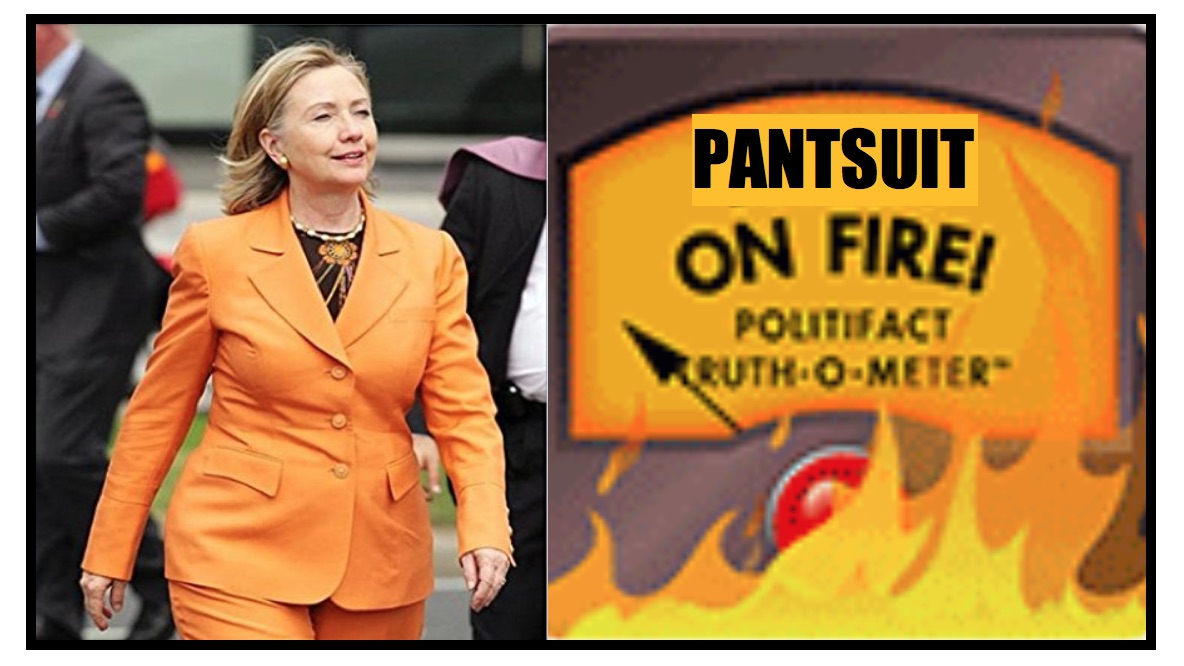 ... this was an election that was, in many ways, about anger. And Trump and Sanders capitalized on that.

Donald Trump is in the White House. Hillary Clinton is not, because she lost the election to Trump.

This single statement should forever negate every attempt Mrs. Clinton and her supporters have made since the election or will make in the future that she genuinely accepts any blame whatsoever for her loss. With her guard slightly down, she has shown us that, in her fevered mind, she thinks she genuinely defeated Bernie Sanders, even though the WikiLeaks emails clearly show that the entire Democratic Party primary process was rigged in her favor, and that no alternative outcome was possible. More incredibly, she also believes that she "beat" Donald Trump, even though the Electoral College scoreboard reads: Trump 304, Clinton 227.

Several NewsBusters commenters have caught Mrs. Clinton's second blatantly false statement in separate posts. She made it in her commencement address at Wellesley College, and Traister referred to it in the New York interview without challenging it:

Here on her home turf, Clinton was much more fiery than she had been during and right after the campaign, drawing sharp comparisons between the era in which she was at Wellesley and now, noting that back then “we were furious about the past presidential election of a man whose presidency would eventually end in disgrace with his impeachment for obstruction of justice after firing the person running the investigation into him at the Department of Justice.”

Mrs. Clinton's reference, of course, is to Richard Nixon.

But Richard Nixon was not impeached. He resigned from office.

Hillary Clinton knows this, yet she imparted false history to thousands of people at Wellesley, viewers who watched most of her address on the left-sympathetic cable news channels, and anyone else who now or in the future happens to read the transcript of her address or views excerpts of it online at places like Time.com.

Only two presidents have been impeached: Andrew Johnson and Hillary Clinton's husband Bill. Bill Clinton is the president who was impeached for perjury and, more to the current point, obstruction of justice, for co-opting or encouraging several people to falsely testify on his behalf in legal proceedings.

There are several contestants for Mrs. Clinton's third-most obvious New York Mag interview howler. A few of them, thinly or totally unsupported, relate to what are arguably her opinions. Examples include the degree to which sexism supposedly played a role in her defeat (ignoring the likelihood that millions of voters were turned off by the "elect her because she's a woman" nonsense); her tired insistence that she would have won if the election had been held on October 27 (but then the FBI's James Comey supposedly ruined it all); and the degree to which she was supposedly undermined by "an advocacy press on the right that has done a really good job for the last 25 years" (ignoring the fact that the ubiquitous mainstream press actively cooperated with her campaign's messaging from Day One).

The falsehood which one stands out above those just noted and others, because it is utterly without factual basis, is her contention that she lost because of voter suppression in states like Wisconsin:

Besides, she argues, “what I was doing was working. I would have won had I not been subjected to the unprecedented attacks by Comey and the Russians, aided and abetted by the suppression of the vote, particularly in Wisconsin.”

As demonstrated in a NewsBusters post earlier this month, there is no evidence that voter suppression occurred in Wisconsin. The Associated Press feebly attempted to demonstrate that there was earlier this month, but in each of the few instances cited, the voters involved had months or years to take care of identification issues, and still could have cast Election Day or timely post-election provisional ballots, but failed to follow through.

The more pertinent national question may be how many fraudulent ballots were cast in the 2016 general election, with the vast majority more than likely voting for Mrs. Clinton, given news out of North Carolina in late April:

Less than a year after a federal appellate court sided with the Obama administration to strike down North Carolina’s election integrity reforms, a state audit reveals that hundreds of votes were illegally cast by felons and non-citizens in just one election. Voter impersonation, double voting and irregularities in absentee ballots sent via mail also tainted the election, according to the investigation conducted by the North Carolina State Board of Elections (NCSBE). The probe analyzed records from the 2016 general election.

State auditors found that about 500 ineligible people voted in 2016, more than 440 of them felons. Dozens of non-citizens from 28 different countries also cast ballots, the probe found.

Don't look for the AP, PolitiFact, Snopes or other alleged fact-checkers to point out any of this. They're too busy verifying the origins of Russian dressing and criticizing Trump's claim that recent trade negotiations with China opening up certain of its markets for U.S. goods are a big deal.

Concerning the latter, demonstrating the absurd and desperate lengths to which "fact-checkers" will go to discredit anything Donald Trump says or does, part of the AP's "logic" was that Trump's pronouncement "overlooks the opening of China by President Richard Nixon in 1972." Though Nixon's visit was historically important, there is little to no historical evidence that the visit itself had any immediate direct impact on trade between the two countries.