On Friday, the government reported that the economy added a seasonally adjusted 211,000 jobs, and that the unemployment rate dropped to a 10-year low of 4.4 percent.

The day's press coverage had three noticeable highlights. The first was the headline at the Associated Press's coverage — "US JOBS DATA SHOW SOME SCARS FROM RECESSION FINALLY HEALING." The second was the use of the word "unexpectedly" in connection with better-than-expected instead of worse-than-expected economic news. The third was the press's collective failure to recognize huge full-time employment gains.

Expectations were that fewer jobs would be created and that the unemployment rate would go up, not down, from March's 4.5 percent. That led Michelle Jamrisko at Bloomberg News to employ the "U-word" in circumstances rarely seen during the past eight-plus years: 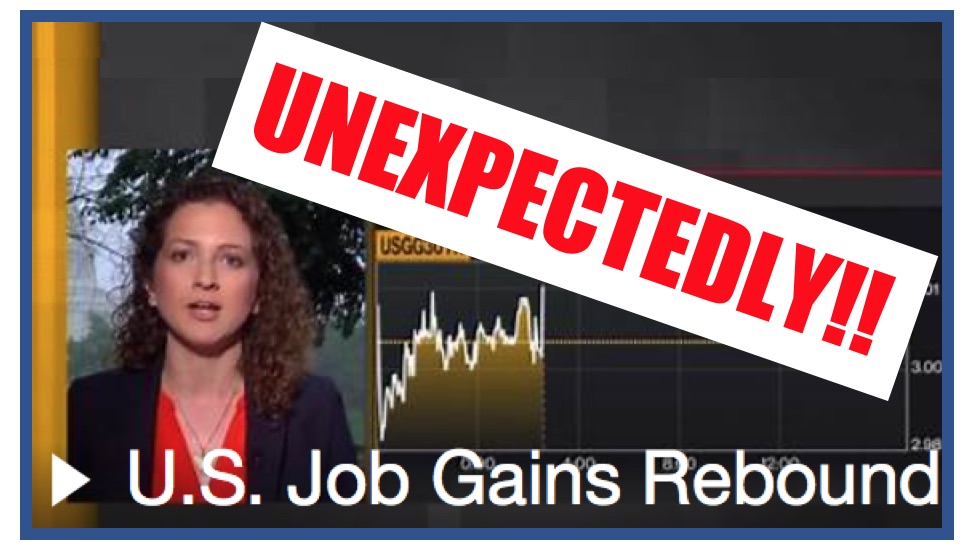 U.S. payroll gains rebounded in April by more than forecast and the jobless rate unexpectedly fell to 4.4 percent, signaling that the labor market remains healthy and should support continued increases in consumer spending.

The 211,000 increase followed a 79,000 advance in March that was lower than previously estimated, a Labor Department report showed Friday. The median forecast in a Bloomberg survey of economists called for a 190,000 gain. While the unemployment rate is now the lowest since May 2007, wages were a soft spot in the report, climbing 2.5 percent from a year earlier.

The brighter figures follow a weaker-than-expected reading in March, when payrolls were partly depressed by a snowstorm that slammed the Northeast during the survey week.

Both Bloomberg and Reuters failed to note the continuation of a encouraging 2017 trend, namely that full-time employment has suddenly taken off.

As to the Associated Press's coverage, Christopher Rugaber noted that the full-time employment situation has been improving, but only gradually.

But before getting to that point, it's instructive to compare the opening paragraph of Rugaber's take (with Paul Wiseman) on the job market and the economy just after Election Day last year with his Friday story's headline and content.

Here are the opening paragraph and one later sentence from that November story:

November 10, 2016
The economy that Trump inherits: Durable but sluggish

Donald Trump inherits a much sturdier economy than the one Barack Obama carried into his second term four years ago. Back then, the scars of the Great Recession were still fresh. Joblessness was near 8 percent. Pay was flat. Europe faced a grave debt crisis that threatened to spread across the Atlantic.

... Late last year, the Fed raised its benchmark short-term rate from a record low after having kept it there for seven years to help rejuvenate the economy after the recession.

US JOBS DATA SHOW SOME SCARS FROM RECESSION FINALLY HEALING

A burst of hiring in April provided reassurance for the U.S. economy after a slow start to the year: Job growth returned to a healthy pace. Unemployment hit a decade low. And the number of part-time workers who want full-time jobs reached its lowest point in nine years.

... Some of the job market's scars from the Great Recession have yet to heal. The proportion of Americans who either have jobs or are looking for one dipped in April to 62.9 percent from 63 percent. While that figure has improved over the past 18 months, it remains well below the prerecession level of 66 percent.

Economists don't expect that figure to get much better.

Six months ago, any AP reader would have thought, based on the November 10 verbiage above, that the "Great Recession" was a distant memory.

But somehow, we're now in a situation where some of that recession's scars are "finally healing." How can that be?

The last time it took eight years for a downturn's scars to heal was after the Great Depression in the 1930s. Then, the administration of Franklin Delano Roosevelt employed a strategy involving "stimulus" and overarching regulation. It only succeeded in lengthening the Depression's misery. Similarly, as the AP just admitted, the response of the Obama administration to a far less severe downturn, which also involved "stimulus" and regulatory overreach, has left scars that failed to finally heal after eight long years. Imagine that.

The gradual shift in hiring from part-time to full-time work is an encouraging one. It suggests that many businesses are meeting rising customer demand by expanding some employees' hours. During much of the economic recovery, the number of part-timers remained unusually high - one reason why steady job growth didn't produce sharp gains in pay or consumer spending.

The shift to full-time employment has not been "gradual."

In a development not so strangely coinciding with the known end of the Obama administration, it has suddenly taken place in the past four months, during which the economy has added 1.739 million seasonally adjusted full-time jobs — 191,000 more than were added in all of 2016:

On a not seasonally adjusted basis, during the three months ending in April, the economy actually added (before seasonal conversion) over 2.5 million full-time jobs, the second-highest February-April performance since related recordkeeping began 49 years ago (only 2010 was higher, and that was due to decennial census hiring).

At least the AP, unlike Bloomberg and Reuters, recognized the trend's existence, though insufficiently. That's an improvement compared to how long AP took to acknowledge the post-recession trends towards part-time and low-paid work (not until mid-2013, though it had been evident for at least 4 years) and how long it took to admit that Obamacare might be contributing to those trends (not until mid-2015, though it was predicted when the Affordable Care Act passed in 2010, and was obviously affecting the economy once it went live on January 1, 2014).