There is little doubt that the big economic news Wednesday was payroll and employee benefits giant ADP's estimate that the economy added 298,000 seasonally adjusted private-sector jobs in February. Over seven hours later, the New York Times did not have the news on its website's home page — or even at its "Business Day" business and financial news web page.

Three screen shots taken of the Times's home page as of 3:40 this afternoon (here, here, and here) contain all news items listed before the home page moves into links to separate sections. There is no story on ADP's private sector jobs report.

The home page's reference to the paper's "Business Day" page looks like this, complete with link to a lead item whose headline appears to have been written by someone whose head is still stuck in the late-1960s:

The Business Day page itself, as seen in the four more screen shots (here, here, here and here), also does not mention the news from ADP.

News about the ADP report can be found at the Times if one is enterprising enough to do a site search on "ADP," with newest items first, at which point the reader will see links to wire service dispatches from Reuters and ADP. But only people specifically looking for news about today's ADP report at the Times website will do that. That search also effectively confirms that the Times did not prepare its own story on the ADP report. The absence of an in-house ADP story makes it very likely that the news won't make it into the Old Gray Lady's Thursday print edition.

The Times's failure to make ADP's news visible increases the likelihood that the Big Three television networks will also fail to mention the news. An ADP report with almost 300,000 jobs added would certainly have been given far more visible treatment during the Obama administration.

Obviously, it's early in the Trump administration, but one would have to struggle mightily to think of an economic report released during the Obama era which came in so unexpectedly strong. Obama-era news leaned heavily towards being weaker than predicted so often that describing bad news as having occurred "unexpectedly" became a running joke.

Private sector employment increased by 298,000 jobs from January to February ... 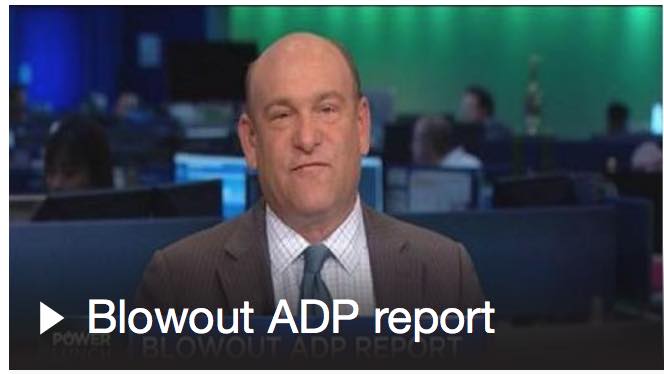 “February proved to be an incredibly strong month for employment with increases we have not seen in years,” said Ahu Yildirmaz, vice president and co-head of the ADP Research Institute. “Gains were driven by a surge in the goods sector, while we also saw the information industry experience a notable increase.”

U.S. businesses added the most jobs in three years last month, a private survey found, a sign that hiring may be accelerating from last year's modest levels. ("Modest" doesn't reflect how AP was describing "last year" as it happened. — Ed.)

Payroll processor ADP said Wednesday that businesses added 298,000 jobs in February, up from 261,000 the previous month. The gains were led by a huge 66,000 increase in construction, the most in 11 years, and 32,000 manufacturing jobs, the most in five years.

It's far too early to start singing "Happy Days Are Here Again." Additionally, despite 760,000 private-sector jobs added in the past three months, other hard-number economic news has not been as upbeat. Finally, ADP doesn't make its raw data available, so the reasonableness of its seasonal adjustments can't be audited.

That said, it's telling that the outfit which considers itself the paper of record, and which is shamelessly positioning itself as the source of "Real Journalism," could so deliberately and obviously go against its own slogan when the first strong jobs-related news about the economy appears during the first full month of a new Republican administration.