Meg Kinnard at the Associated Press betrayed quite a bit of unhappiness Wednesday evening and Thursday morning in her coverage of workers' decisive rejection of a union organizing effort at Boeing Corp.'s 787-10 production plant in North Charleston, South Carolina.

In two very similar reports found at the wire service's Big Story site, Kinnard solely blamed "Southern reluctance toward unionization" for the rejection. Though that was clearly a factor, it is hardly the only reason for the overwhelming 74 percent to 26 percent rejection. Kinnard "somehow" forgot to report that this is the very same plant whose opening former President Barack Obama's National Labor Relations Board deliberately delayed in 2011.

The AP, which ran timeline coverage all day Wednesday, was clearly invested in a union-favorable outcome, as was Bloomberg News, which headlined a hoped-for "Earthquake in the South" early Wednesday morning.

Interestingly, one major change between Kinnard's two AP reports was to the first paragraph.

The headline and first paragraph at Kinnard's Wednesday evening report, written before the size of the unionization effort's defeat was known, read as follows (bolds are mine throughout this post):

In this morning's 8:09 a.m. version, Kinnard toned down the headline a bit, but tellingly moaned about how a certain orange-haired resident of 1600 Pennsylvania Avenue would benefit:

Production workers at Boeing's South Carolina plant have overwhelmingly rejected an effort to unionize, maintaining Southern reluctance toward unionization and setting up a picture-perfect stop for President Donald Trump, who visits the facilities this week.

Translation: "Darn it, we could have done an end-zone dance on the obviously anti-union Republican Trump if these workers had voted the right way."

Kinnard's earlier report did mention Trump's upcoming visit — but in neutral language and in the story's fourth paragraph.

Unfortunately for the heavily unionized AP, the fact is that union leaders mostly locked into the Democratic Party don't like Trump, but rank and file union members who aren't fever-swamp journalists were a huge factor in his election victories in several Midwestern states. Additionally, the Carrier plant in Indiana where roughly 1,000 jobs were saved rather than being moved to Mexico is a union plant. Oh, and Jimmy Hoffa, Jr. — the same guy who used violent language in encouraging union members to go after Tea Party members in 2011 — recently praised Trump effusively for "doing what we've been talking about for... ten years." Kinnard's easily inferred anti-union smear on Trump doesn't fly.

Kinnard's and other outlets' biggest omission, though, was their failure to cite the Obama administration's attempt to prevent good jobs from coming to South Carolina.

Coverage originally posted at the Washington Examiner and still excerpted at National Review tells the story (additional paragraph breaks added by me):

Can federal bureaucrats tell a private company where to build a factory?

Members of President Obama’s National Labor Relations Board think they can.

In a decision that even the New York Times is describing as “highly unusual for the federal government,” Lafe Solomon, who was appointed to the board by Obama, filed a complaint on behalf of the NLRB on Wednesday seeking to force the Boeing Co. to build an assembly line in Washington state instead of South Carolina. The NLRB action stems from Boeing’s October 2009 decision to build a new factory for its new 787 Dreamliner airplane near Charleston, S.C.

Boeing first sought to build the new plant near its existing facility in Puget Sound, but negotiations with the International Association of Machinists broke down when the union refused to agree to a long-term no-strike clause. The IAM had struck four times since 1989, costing Boeing at least $1.8 billion in revenue.

That’s when Boeing chose South Carolina, a right-to-work state where, unlike Washington, workers are not forced to join unions. As a result of this policy, only 6.2 percent of South Carolinians belong to unions. Construction of Boeing’s new Charleston factory is nearly complete, and the company has already hired more than 1,000 new employees, drawn mostly from within the immediate region. And back in Washington, Boeing has actually increased employment at its Puget Sound plant by 2,000 workers.

But that isn’t good enough for the IAM or the Obama White House. ...

In a move widely and correctly recognized as a bow to political pressure as the next year's presidential election loomed, the NLRB dropped its action against Boeing in December 2011.

It is inconceivable that memories of the NLRB's attempt to prevent them from earning a well-paying livelihood wasn't on the minds of Boeing's North Charleston production workers. 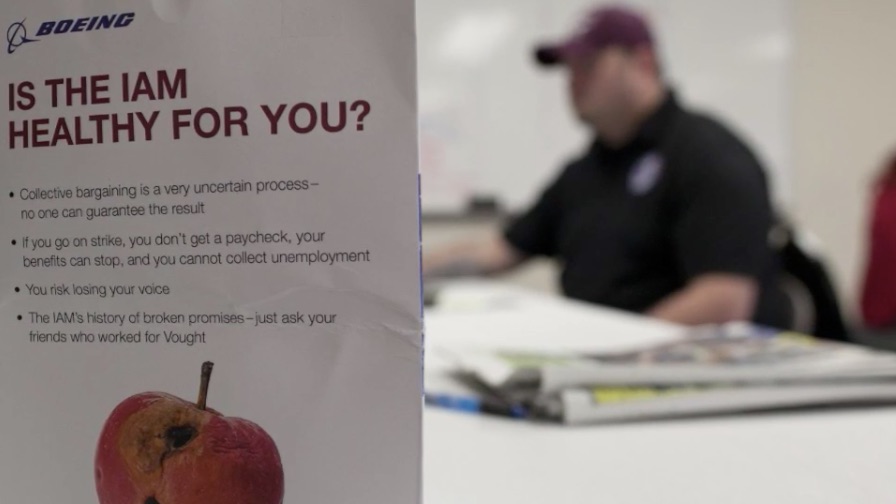 ... In its campaign, Boeing didn't threaten to move its operations abroad if workers unionized — a tactic that often surfaces when collective bargaining efforts arise — perhaps abstaining from those threats because of its huge South Carolina plant investment and billions of dollars in federal defense contracts the company does not want to risk. (So what Boeing didn't do is news?! — Ed.)

... But this most recent test of Southern acceptance of collective bargaining movements was an uphill battle for the union and its backers. The global aviation giant, which came to South Carolina in part because of the state's minuscule union presence, did so with the aid of millions of dollars in state assistance made possible by officials who spoke out frequently and glowingly with anti-union messages. (As if no other state has incentive programs. — Ed.)

In a typical establishment press practice, Kinnard and AP failed to answer the question which would be on virtually every reader's mind, namely: "How much do the workers make now?"

To its credit, Noam Scheiber's coverage at the New York Times told readers that the answer is "about $23 per hour on average, versus about $31 per hour for comparable (unionized Boeing) workers in Washington State." So did United Press International. But stories at the Chicago Tribune (via the Washington Post), Reuters, and the Bloomberg report referenced earlier did not.

The establishment press also failed to carry most of IAM's out--of-touch response to the loss, much of which carried at a local South Carolina TV station:

... IAM leaders expressed their disappointment at the result.

“We’re disappointed the workers at Boeing South Carolina will not yet have the opportunity to see all the benefits that come with union representation” said IAM lead organizer Mike Evans. “But more than anything, we are disheartened they will have to continue to work under a system that suppresses wages, fosters inconsistency and awards only a chosen few.”

... “Boeing management spent a lot of money to make sure power and profits remained concentrated at the very top. The company’s anti-union conduct reached new lows,” said Evans. “The IAM remains committed to getting Boeing South Carolina workers the respect, wages and consistency they deserve.”

It seems that Mr. Evans, who is supposedly a union organizer, instead just arrived from a 2011 Occupy Wall Street protest against "the (evil) one percent."