How ironic it is that the announced death of Cuban Communist dictator Fidel Castro late Friday night coincides with the U.S. establishment press's obsession with smearing websites which dare to challenge their narratives as Russian-inspired "fake news."

Castro's original rise to power was arguably the product of a spectacularly fake dispatch written nearly six decades ago by reporter Herbert L. Matthews and published in the New York Times.

It's hard to exaggerate the importance of Matthews' February 24, 1957 front-page Times story in building Castro's international status and respectability.

The now-deceased tyrant formally recognized it himself fifty years later. Georgie Anne Geyer, whose 1991 book, Guerrilla Prince: The Untold Story Of Fidel Castro, is the definitive work on Castro to that point, described the background behind that recognition perfectly in a February 2007 syndicated column (bolds are mine throughout this post):

Last week, the Cuban government unveiled a marble plaque commemorating the interview Fidel and his rebel fighters in the Sierra Maestra gave to New York Times journalist Herbert Matthews 50 years ago. It is situated in the wild mountains exactly where the interview took place and was then published on Feb. 24, 1957, showing that Castro was not only alive but fighting. The information made the young "barbudo" into an international figure, and Matthews, who had sympathized with the left in the Spanish Civil War, made no attempt to hide his glorious fascination with the young revolutionary. 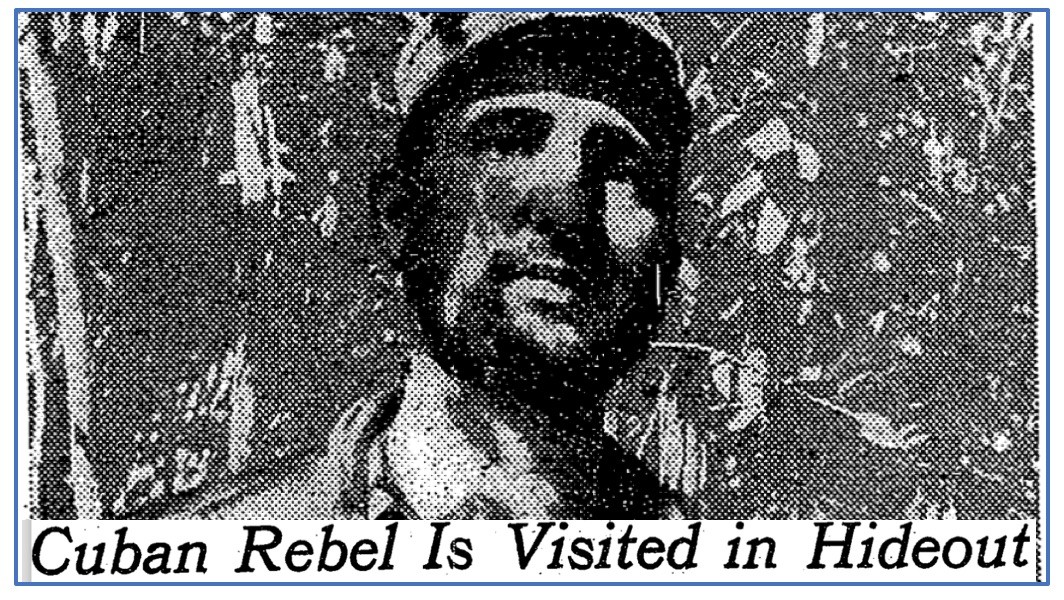 "The personality of the man is overpowering," he wrote. "It was easy to see that his men adored him.... Here was an educated, dedicated fanatic, a man of ideals, of courage and of remarkable qualities of leadership. ... one got a feeling that he is now invincible." He was a man "with extraordinary eloquence ... a powerful six-footer, olive-skinned, full-faced, with a skraggly beard," a "great talker" who dealt fairly with the peasants, paying for everything they ate.

The prose was arguably forgivable. ... But the unforgivable part was that Matthews showed himself to be extraordinarily gullible for an experienced reporter. The rebels told him they had hundreds of fighters, which he duly reported, while they paraded the same 18 men past him repeatedly to give the appearance of power. He never noticed this, or other major deceptions; his reportorial sin was that he wanted too much to believe.

For years, and especially after Castro took power, proclaimed himself a "communist" and got rid of the upper and middle classes in order to install his total dictatorship, Matthews was the single most hated man of all for Cuban-Americans ... A common caricature in Miami showed Castro saying, "I got my job through The New York Times."

The plaque's unveiling is best seen as an end-zone dance telling the world, "Ha-ha, we deceived you with fake news" — and that's exactly what Castro did, with Matthews' indispensable help.

Castro's mission with Matthews, besides exaggerating his numbers, was to convince the Times reporter that his ultimate intentions were benign and democratic. As seen in his full Times report (posted for future reference, fair use and discussion purposes), Matthews, in the paragraph immediately following his characterization of Castro's "26th of July movement" as a "revolutionary movement that calls itself socialistic," wrote:

The (Castro) program is vague and couched in generalities, but it amounts to a new deal for Cuba, radical, democratic and therefore anti-Communist.

Whether Matthews truly believed this or was playing along to provide Castro cover should be an open question, especially given David Grann's description of him in New Yorker Magazine in May 2012 as someone who "longed not merely to cover world-changing events but to make them."

Near the end of his report, Matthews let Castro's mask of perfection slip a bit, writing without any sense of irony that this supposedly brilliant, university-educated man "has strong ideas on economy, too, but economists would consider them weak." Sixty years on, the Cuban people, subsisting on $25 per person per month, would certainly agree with that.

Additionally, as Jack Cashill observed in a July 2005 column:

His claim that Castro was “anti-Communist” suggests that, at best, Matthews had been hoaxed. Castro’s two closest confidantes, his brother Raul and Ernesto “Che” Guevara, were Communists from the beginning. In 1957, the same year as the Matthews interview, Guevara wrote to a friend, “My ideological training means that I am one of those people who believe that the solution to the world’s problems is to be found behind the Iron Curtain.”

... It is impossible to believe that Raul Castro and Guevara did not influence Fidel in both style and substance. Guevara had been with Castro since 1955.

The sense of self-congratulation in Mathews' February 24, 1957 report is understandable in one sense. The journey upon which he and his wife embarked — she accompanied him most of the way, but not into Fidel's camp — was extraordinarily dangerous. But Matthews and the Times, based on a single, orchestrated meeting, unilaterally presented themselves as the world's foremost authorities and sole arbiters of Castro's genuine intentions. Matthews in particular, whom Geyer described as "a hopeless romantic who sought desperately to find and believe in causes," but also his editors at the Times, were completely unfazed when the Fulgencio Batista regime disputed the paper's contentions two weeks later (published in a single column at the Times on Page 11).

One was that Castro was "one of the leftist leaders in the disorders in Bogota, Columbia in April 1948." That claim would hit the "Mostly True" bar of honest fact-checking.

Castro's idol there, Jorge Eliécer Gaitán, had a "close relationship with the Socialists and Communists." Castro, in Bogota "to organize a Latin American Students Congress," was arrested for distributing leaflets. In her book, Geyer quotes a man who was there with Fidel who claimed that "Castro rejoined ... (a rioting) mob" shortly after Gaitán was murdered, "drunk with the looting, burning and shooting."

A second Batista claim, that Castro had "contact with meetings held behind the Iron Curtain," was much shakier, though there is no doubt that he received Communist-led guerrilla warfare training in Mexico City, where he also first met Guevera, in the mid-1950s.

The third Batista claim, that "the dialectics of the rebel movement" proved Castro's association with Communism, was only somewhat subjective. Matthews, who based on his background surely recognized telltale "dialectic" signs, remained unperturbed by the 26th of July movement's stated "anti-colonialism" and "anti-imperialism," language which at the time was a virtually certain indicator of Communist influence. Instead, he simply accepted Castro's answer to such concerns when he raised them: "You can be sure we have no animosity toward the United States and the American people."

Geyer observed that in the aftermath of that Matthews-Castro meeting, "the world was never quite the same again." That's for sure.

What of the U.S. Central Intelligence Agency, which certainly had to have damning information on Castro? Cashill wrote: "Disarmed by Matthews’ authoritative reports" — which we now know represented "fake news" issued by the establishment press's official house organ — "the CIA ... offered no resistance." Perhaps the agency was inclined in that direction anyway. New York Magazine's Grann quoted "The C.I.A. officer in charge of Caribbean operations" admitting that, largely influenced by outrage over Batista's own brutality, “My staff and I were all Fidelistas."

Batista fled the country on New Year's Eve, 1958. Days after Castro seized power, he appeared in what was presented as a reassuring taped TV interview on CBS's Ed Sullivan Show. NBC's Tonight Show with Jack Paar, NBC's Meet the Press, and others followed suit. These appearances on Yankee TV, which surely bought Castro time to brutally consolidate power and to summarily execute hundreds of former Batista officials and opponents during his regime's early months, would never have been possible without Herbert Matthews' starry-eyed February 1957 dispatch. Castro's power was never severely tested after the failed 1961 Bay of Pigs invasion.

In 1962, during the Cuban missile crisis, Castro helped bring the world to the brink of thermonuclear war. Contemporaneous correspondence from that era shows that Castro wanted it to happen, and that he tried and failed to persuade Russian/Soviet Union Premier Nikita Khrushchev to launch a preemptive nuclear strike against the U.S.

Herbert Matthews' "fake news" set the stage for what is now nearly 58 years of Castro-led Cuban tyranny. In turn, that regime's leaders nearly gave the world a future where, as Khrushchev allegedly once said, "The living would envy the dead." Now, the leadership at the New York Times, which disseminated his "fake news," and at other desperate establishment press outlets, are working feverishly to smear, marginalize and eliminate their supposedly less honest competition.

In light of this and other outrageous "fake news" reports ginned up by the press during at least the past 60 years, the only clean thing I can say is, "Spare me the sanctimony."

On top of that, without even the slightest sense of irony, they're hysterically and hypocritically claiming that this "fake news" is Russian-influenced. You can't make this up — but obviously they can.