USA Today assigned three primary reporters, four additional contributors and two researchers to its coverage of the left's attempt to convince Republican Electoral College electors to betray their states' voters and their party.

The result, published early Wednesday morning, is "Harassment or Hail Mary? Electors feel besieged." Despite throwing all those resources into the story, there is no mention at all of the many violent threats directed at electors reported elsewhere, up to and including death threats.

The USA Today story irresponsibly sanitizes the mindset of many of those behind the effort to upend the election result, portraying it, with the help of two quoted electors who likely don't want to be on the receiving end of even more of what others are experiencing, as "sour grapes" coming from people who "mean well."

USA Today readers are led to believe that electors are having to put up with an "activists' barrage" of email, some snail mail, and phone calls — "harassment," but nothing more. The story has no mentions of death threats, contains no form of the word "violent," and doesn't even make any direct reference to the type of language being directed at them.

It doesn't take much research to learn that the situation is far uglier than USA Today portrayed it, and that its ugliness has been known for some time. 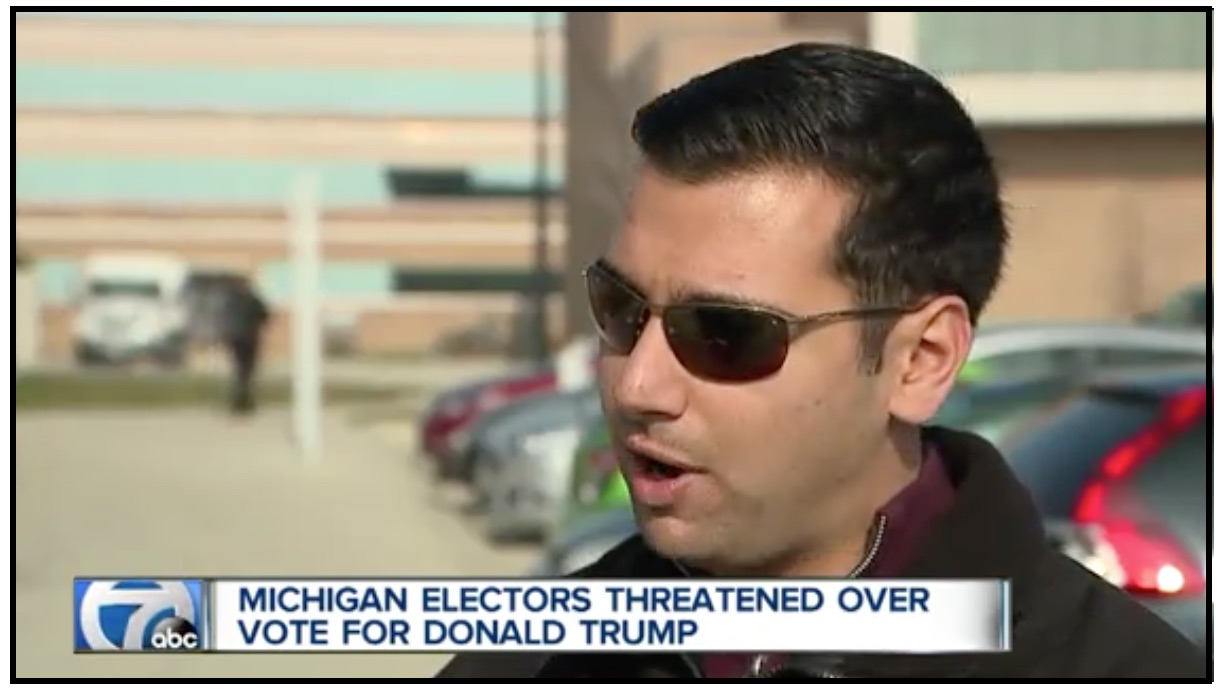 Michael Banerian wants to show that young adults still have faith in the political system, but he said his selection as one of Michigan’s 16 Electoral College voters has prompted emails urging him to vote for Democrat Hillary Clinton and even threatening death.

... “You have people saying ‘you’re a hateful bigot, I hope you die,’ ” he said. “I’ve had people talk about shoving a gun in my mouth and blowing my brains out. And I’ve received dozens and dozens of those emails. Even the non-threatening-my-life emails are very aggressive.”

The Detroit News verified one message containing a death wish and another containing a death threat, in which the person told Banerian he would “put a bullet” in his mouth. Banerian said he deleted the rest of the emails and messages “because as you can imagine they’re clogging up my email.”

A Texas elector told Dallas's NBC affiliate on November 17 — again, six days ago — that "There are some electors who have been threatened with harm or with death." That's plural.

The harassment level is so serious in Idaho that "Secretary of State Lawerence Denney issued a statement last week calling on Trump foes to stop harassing the state’s four electors." USA Today did not report Denney's statement issued "last week."

Heat Street reports that the Secretary of State in Georgia has also commented (link is in original):

Things have gotten bad enough in Georgia that its Secretary of State issued a statement warning that Clinton supporters who harass Electors over the phone—including anyone who encouraged the practice —could be subject to dire consequences.

The Arizona Republic reported the following — once again, six days ago:

Four electors told The Arizona Republic Thursday that over the past week or so, they've been hit with thousands of emails, phone calls and letters sent to their work and homes.

Electors in other states have also reportedly received violent threats.

USA Today would have you believe that what is going on is merely annoying, and quotes two Trump electors to build that case:

"It sounds like sour grapes to me," the incoming president of Florida's Senate and an elector, Joe Negron of Stuart, said about the movement to change electors' stripes. "We had an election in Florida, and Donald Trump received the majority of votes and therefore gets 29 electoral votes."

Elector Susan Moore of Pensacola, Fla., has been a Republican Party loyalist since she started volunteering in Tennessee when she was 12. She has more than 800 emails, many of them part of the same form letter, in her inbox.

"When it comes down to it, I think these people mean well," she said of the anti-Trump sector. "But they’re asking us to do something that’s really not going to work out the way they want."

If USA Today would recognize the existence of the threats, it would hopefully also understand the following:

The paper did get one thing right in identifying who could put a stop to all of this:

"Hillary's got a great campaign going," said Sharon Geise, an elector from Mesa, Ariz., who estimates 8,000 emails have flooded her inbox. "It's the same thing, pretty much. Basically: Vote for Hillary Clinton. It's bizarre. I don't dare answer my phone."

A dozen letters urging her to back anybody but Trump arrived at her home Thursday.

"She has to stop all of this," Geise said of Clinton. "This is ridiculous."

It's not clear whether Clinton supports this movement.

Without a clear statement from Mrs. Clinton, many of her supporters are going to continue to believe that they are acting on her behalf.

As for Team Clinton, even as their friends in the media demand that Donald Trump denounce white nationalists on a daily basis — apparently 25 times isn't enough — they're apparently too busy considering whether they should challenge the election result to suggest their supporters stop their harassing and threatening behavior.

As reported at the website of New York Magazine Tuesday evening:

Hillary Clinton is being urged by a group of prominent computer scientists and election lawyers to call for a recount in three swing states won by Donald Trump, New York has learned.

... Last Thursday, the activists held a conference call with Clinton campaign chairman John Podesta and campaign general counsel Marc Elias to make their case, according to a source briefed on the call.

It may actually be that their supporters' Electoral College noise could well be serving their ultimate purpose.

As to USA Today, its treatment of the situation with Electoral College Republican electors demonstrates that the media's obsession with "fake news" is at least partly a distraction from its consistent failure to report genuine news that makes the left look as bad as it deserves to.