It's hardly a secret that establishment press news organizations have had a hard time coping with the reality that Donald Trump is this nation's President-Elect.

Having worked so zealously in their failed effort to push Hillary Clinton over the finish line while abandoning all remnants of journalistic standards, the Associated Press and its reporters appear to be among the hardest hit. That status is exemplified in the AP's November 18 temper tantrum disguised as a report on Trump's Cabinet and staff selections.

The only reason that the AP's self-pity and pseudo-suffering aren't more visible to most people is that most AP output with the wire service's name attached to it is in print in an age which favors video. But we should never forget that AP content is the primary driver of what ends up on most national radio and TV programs — and it's obvious that their narrative has been a negative force encouraging the sore losers to continue their unhinged behavior.

The headline and opening paragraphs at the Friday evening story by AP reporter Errin Haines Whack read as follows: 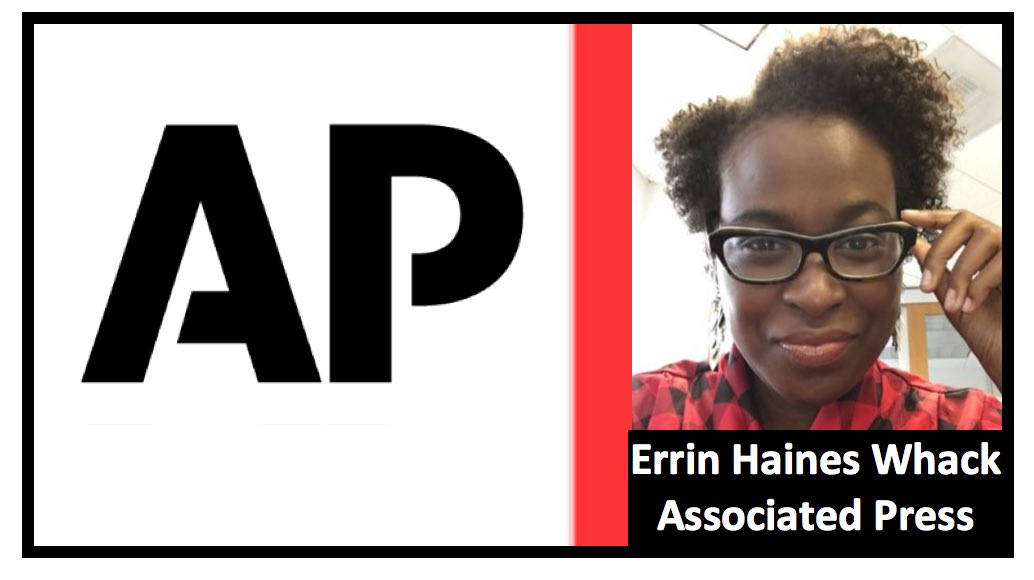 Republican President-elect Donald Trump's choices for leadership posts threaten national unity and promise to turn back the clock on progress for racial, religious and sexual minorities, civil rights leaders and others said Friday after his nomination of Alabama U.S. Sen. Jeff Sessions for attorney general.

Comments attributed to Trump's picks, also including Stephen Bannon as senior adviser and chief strategist and former Army Lt. Michael Flynn as national security adviser, serve to embolden everyday Americans to lash out at members of minority groups, they said.

This is supposed to be a straight new story. It might as well be a Democratic National Committee press release — and given the AP's conduct during the presidential campaign, one certainly can't rule that out.

So who is in Whack's "they said" group?

Well, there's a founder of the violent, racist, anti-Semitic Black Lives Matter group, which brought us such wonderful slogans as "Pigs in a blanket, fry 'em like bacon," and "What do we want? Dead cops! When do we want it? Now!":

"If Sessions were to become the attorney general, the freedom and liberty of the historically marginalized would be severely threatened," said Mckesson, who has protested in several cities demanding police reform to address bias against communities of color. "Sessions' nomination would also confirm that Trump plans to govern as he campaigned — as a proponent of bigotry, racism and xenophobia.

On what planet does the sixth-place finisher in the Baltimore Mayor's race deserve an unchallenged soapbox?

Whack fails to acknowledge that the supposedly racist, bigoted and xenophobic Sessions essentially put the Ku Klux Klan out of business in Alabama during the 13 years he was a U.S. Attorney — was, because he was among the complete cadre of 93 U.S. attorneys from whom incoming President Bill Clinton demanded resignations as one of his first actions as President in 1993. Sessions also "filed several cases to desegregate schools in Alabama," marched with "civil rights icon John Lewis," and "campaigned against George Wallace in Alabama."

It's also obvious that the AP and the press in general want to pretend that we haven't gone through the past eight years with the two most blatantly political and race-obsessed Attorneys General in U.S. history.

Who else did Whack go to for "expert" opinions on Trump's nominees? With explanatory help from Powerline's John Hinderaker, here are two of them:

In the AP report: "Ibrahim Hooper, a spokesman for the Council on American-Islamic Relations."

Hinderaker's comment: "(CAIR was) named as an "unindicted terrorist co-conspirator" in the Holy Land Foundation case in 2008. That case, as described here, "resulted in guilty verdicts on 108 counts" for those involved.

In the AP report: "Daniela Lapidous, a 22-year-old Jewish woman who works to fight climate change … called (Steve) Bannon a “misogynist and anti-Semite and an anti-climate extremist."

Hinderaker's comment: "Has Lapidous ever met Mr. Bannon? Not as far as we know. Does she cite any basis for her opinion that Bannon is an anti-Semite? No. ... the assertion that he is anti-Semitic is disgusting. Andrew Breitbart was strongly pro-Israel; our own Scott Johnson once toured Israel with him. Breitbart News, under Bannon’s leadership, has continued to be enthusiastically pro-Israel.

... no anti-Semites are strongly pro-Israel. That combination simply doesn’t exist. Which means that Ms. Lapidous is ignorant. ... why is the Associated Press sharing with us the uninformed opinion of a foolish left-wing ideologue who is all of six months removed from college?"

The answer to Hinderaker's question is likely: Because they can't find anyone else.

We now know, thanks to WikiLeaks' exposure of a previously undisclosed meeting "at the home of John Podesta (which) was limited to reporters who were expected to cover (Hillary) Clinton on the campaign trail," that AP reporters Julie Pace, Ken Thomas, and Lisa Lerer (also a former Journolist participant) attended. This leak exposed the wire service and the other news outlets whose reporters and representatives attended as stealth campaign arms of the Democratic Party and the Clinton campaign.

The grief-stricken AP is clearly refusing to change its ways, and is clearly determined to marginalize and demonize the Democratic Party's opponents — facts, fairness and any potential for genuine national unity be damned.