If you believe the Obama administration, the Hillary Clinton campaign and their apparatchiks in the press — and as we've learned during the past several weeks, all three work assiduously to sing from the same hymnal — the economy we've seen during the presidency of Barack Obama has been one of slow but still acceptable recovery and (yes, this word has been frequently used) "durable" expansion. That's not acceptable in any sense.

Now that the final key pre-election economic reports have been released and predictably spun, it's time for a final word, and it is this: Incredible as it may seem, on one key economic growth metric, the economy during the Obama administration will, by the time it leaves office, end up turning in a worse performance than was seen during the Great Depression.

Before getting to the detail, I should emphasize that what follows does not constitute a contention that the level of human suffering we're seeing now is what it was during the 1930s.

That said, let's not pretend that this nation is not currently seeing unacceptable levels of suffering. It doesn't seem that way to most Americans because the national press has virtually ignored it. Consider just the frightening rise in homelessness, which has increased significantly nationwide, particularly on the West Coast in Los Angeles, San Francisco ("a civic disgrace"), San Jose (with "nomadic villages"), and Seattle (up 19 percent in 2 years), but also particularly in New York City (up 85 percent since 2010). When the national press ever so briefly notices the homelessness problem, unlike during Republican presidential administrations, its journalists don't tie the deteriorating situation to the Commander-in-Chief's economic policies.

It will likely come as a surprise to most readers that by the end of this year, the relative size of this economy compared to its prerecession peak, 7-1/2 years after the "Great Recession" ended, will be less than the analogous measurement 7-1/2 years after the trough of the Great Depression.

The Obama administration's economic recovery has been not only far worse than any other post-downturn performance since World War II. That fact is at least occasionally if grudgingly reported, and is supported by charts I prepared in 2014 seen here and here. Beyond that, the discussion below will show that the Obama era recovery, by the just-mentioned metric, has been worse than the weak recovery which lengthened the Great Depression during the 1930s.

To my knowledge, no one in the press has made this comparison — or if they have, they've apparently decided that it's not newsworthy.

The only limitation in the accuracy of this claim, which I will address after presenting the data, lies in the fact that the government didn't begin publishing quarterly estimates of the nation's gross domestic product (GDP) until 1947. So I'll work with the annual available data first, and then show why the conclusion wouldn't change if quarterly data were somehow available.

According to the National Bureau of Economic Research (NBER), the serious downturn which began in July of 1929 officially ended in March 1933. Calendar year 1939 ended 27 quarters after that official trough, while 1940 ended 31 quarters later.

NBER tells us that the "Great Recession" ended in June 2009, and that the economy's previous peak occurred near the end of 2007. Thus, the third quarter of 2016 marks 29 quarters after the recession's official end, and the final quarter of calendar 2016, the last full quarter during Barack Obama's presidency, will be 30 quarters after its end.

So let's look at how the post-recession performance during the Obama years compares to that turned in during the years after the Great Depression's disastrous contraction:

The table shows virtually equal results (10.1 percent vs. 10.2 percent) 27 quarters after their respective troughs, despite the fact that the Great Depression's economic contraction was 7 times greater (at roughly 29 percent) than the 4.2 percent contraction seen during the "Great Recession."

From that point on, the Great Depression economy's performance has left the Obama economy in the dust.

By the time we get to the 30th and final full post-recession quarter during the Obama era, during which I'm bravely assuming we'll see 3 percent annualized growth, the post-"Great Recession" economy will be 12.2 percent larger than it was in the fourth quarter of 2007. Thirty quarters after the Great Depression's trough, the economy was 17.4 percent larger than it was in 1929.

The comparison above is even more infuriating when one considers that the Obama administration's results came about despite a $9 trillion (and counting) buildup in the national debt and all-time record annual budget deficits.

There are some imperfections in this analysis. Those imperfections fail to refute this post's main finding. In fact, if we had more perfect knowledge of what was going on in the economy during 1929 and 1940, revised results would add to the Depression era's advantage over the Obama era.

First, the table assumes that quarterly growth during 1940 occurred in a straight line, which may not be the case.

Skeptics might argue that Franklin Delano Roosevelt's pre-World War II buildup was not yet in full swing, and that growth during the earlier quarters in 1940 was lower. The problem with that contention is that growth during 1939 was 8.0 percent; so the overall increase in trajectory to the 8.8 percent seen during 1940 was not all that great. The real impact of FDR's military buildup wasn't genuinely visible until 1941, when the economy reportedly grew by 17.7 percent.

For this complaint to change the result at the 30-quarter mark and cause the Obama economy to be even marginally better, we'd have to believe that an economy which grew by 8.0 percent in 1939 only grew at an annualized rate of about 4 percent during the first half of 1940, and then sped up to a rate of over 13 percent during the rest of the year. Though possible, that seems unlikely.

A second imperfection here is that annualized GDP at its 1929 peak, which the NBER says occurred in August of that year, may have been a bit greater than the $1,056.6 billion GDP figure for the full year. If so, I don't believe the amount involved would reverse the results of the 30-quarter comparison (especially after considering the final point about 1940, which will be made shortly).

Figures seen here, which are said to be based on government data, indicate that the full-year 1929 economy grew by 6.0 percent ($101.444 billion divided by $95.715 billion in 1929 dollars), while the previous year's economy only grew by 1.6 percent. The official 1929 full-year figure occurred during eight months of expansion and four months of contraction. If we assume that the economy contracted in absolute terms by even 1 percent during its final four months, we'd have to believe that it somehow absolutely grew by just over 7 percent, or at an annual rate of over 10 percent, during its first eight months, following a mediocre 1928. Again, this hardly seems likely.

Instead, though the NBER may have correctly pegged the downturn date using its vague criteria, it seems likely that GDP during the final four months of 1929 was was either flat or even slightly positive.

Thus, if anything, using the full-year results for 1929 as the starting and ending points may understate what annualized GDP was during the final quarter of that year. If that's the case, and if an accurate value could somehow be obtained, it would make the Obama economy's relative performance look even worse.

One final point in the Depression economy's favor has to do with intra-year data during 1940. 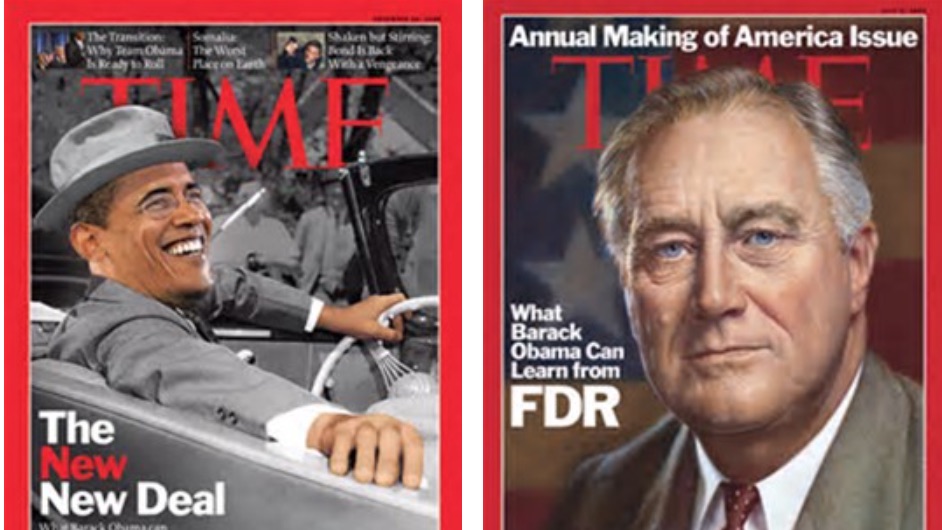 If that year's quarterly growth was consistent, the estimated value of annualized GDP at the end of the second quarter would have been roughly the same as the official $1,266.1 billion figure reported for the entire year. By the end of the third quarter, it would have been about 2.13 percent higher (2.13 percent compounded for four quarters yields the reported 8.8 percent annual growth), or an annualized $1,293.1 billion. Substituting that figure into the above table would result in post-trough growth above the previous peak after 30 quarters of 22.4 percent ($1,293.1 divided by $1,056.6) — nearly double the result seen 30 quarters after the end of the "Great Recession."

Every post-World II economy has turned in post-downturn performances which put the Obama "recovery" to shame. Additionally, as demonstrated in this post, it hasn't even measured up to what was seen during Great Depression's "New Deal" era.

The economy's cheerleaders at CNBC, head cheerleader Mark Zandi of Moody's, and the other leftist apologists in the press and academia should be forced to acknowledge this reality the next time they try to convince us that we should accept the awful results the Obama administration's Keynesian economic policies have wrought.