Friday night, yours truly detailed the latest evidence demonstrating that the Hillary Clinton campaign and a close confidant of Mrs. Clinton herself were involved in early 2008 in spreading the “birther” rumors, i.e., that then-Illinois Senator Barack Obama was not born in the U.S. Despite this news and other longstanding items, the Associated Press and others still insist that there is "no evidence" that Mrs. Clinton was connected with the rumors' initiation.

Concerning the Clinton confidant, former McClatchy Washington Bureau chief James Asher tweeted early Friday morning that Sidney Blumenthal “spread the Obama birther rumor to me in 2008, asking us to investigate.” What he didn’t say is that Blumenthal’s urgings actually caused McClatchy to investigate the matter, even sending reporter(s) to Kenya, where Blumenthal had “told me (Asher) in person Obama (was) born."

From all appearance, McClatchy has never previously reported Blumenthal's clear attempt to steer the news in the interest of smearing a political opponent, their own compliance with that attempt, or what their reporters found. Those details appeared in a very misleading McClatchy report Friday night.

The McClatchy report by David Goldstein is especially offensive because it adopts a "both sides were doing it" stance, giving readers unfamiliar with the timeline of the controversy the impression that the center-right was going after the birther rumors at the same time as Team Clinton. Center-right interest in whether Obama was born in the U.S. did not percolate until well after Obama's nomination became a mathematical certainty.

Here are several paragraphs from the McClatchy mess (links are in original; bolds are mine:

Two supporters of Hillary Clinton’s 2008 presidential campaign reportedly shared the claim that then-rival Barack Obama was not born in the United States and thus was not eligible to be president.

One was a volunteer in Iowa, who was fired, Clinton’s former campaign manager said Friday. The other was Clinton confidant Sidney Blumenthal, according to a former McClatchy Washington Bureau chief.

... In fact, there were several people publicly pushing the theory, which was repeated extensively on conservative news outlets. There were the two Clinton supporters, but there is no evidence that Clinton herself or her campaign spread the story.

Let's stop there. The link associated with "publicly pushing this theory" goes to a McClatchy story published on June 30, 2009, about 14 months after Obama had all but sealed the nomination. (Mrs. Clinton, seen as "hopelessly trailing" by early May 2008, did not formally concede until early June.)

The earliest indication of center-right interest in whether Obama was born in the U.S. did not appear until several days after Mrs. Clinton's formal succession, when, instead of responding to rumors, Jim Geraghty at National Review was responding to the fact that the Obama campaign was refusing to release the candidate's birth certificate:

Reporters have asked for it and been denied, and the state of Hawaii does not make such records public.

The campaign cited the birth certificate in their “Fact Check” on William Ayers, so presumably, someone in the campaign has access to it.

Shortly after that, the "Certificate of Live Birth" was released, leading to demands for the "long-form" birth certificate, and years of conspiracy-mongering ensued — all of which was blamed on the right, but none of which started there.

Getting back to Goldstein's writeup:

Meanwhile, former McClatchy Washington Bureau Chief James Asher tweeted Friday that Blumenthal had “told me in person” that Obama was born in Kenya. 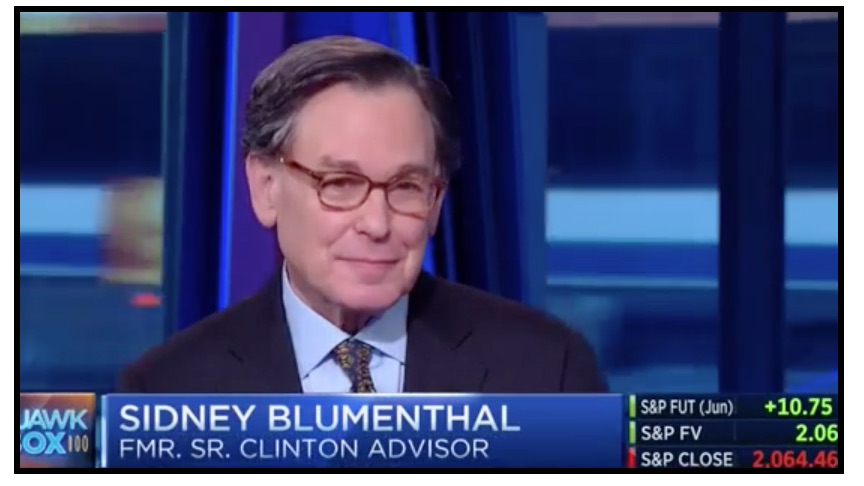 “During the 2008 Democratic primary, Sid Blumenthal visited the Washington Bureau of McClatchy Co.,” Asher said in an email Friday to McClatchy, noting that he was at the time the investigative editor and in charge of Africa coverage.

“During that meeting, Mr. Blumenthal and I met together in my office and he strongly urged me to investigate the exact place of President Obama’s birth, which he suggested was in Kenya. We assigned a reporter to go to Kenya, and that reporter determined that the allegation was false.

“At the time of Mr. Blumenthal’s conversation with me, there had been a few news articles published in various outlets reporting on rumors about Obama’s birthplace. While Mr. Blumenthal offered no concrete proof of Obama’s Kenyan birth, I felt that, as journalists, we had a responsibility to determine whether or not those rumors were true. They were not.”

Blumenthal, who worked in the White House with President Bill Clinton and later was employed by the Clinton Foundation, could not be reached Friday but said in an email to The Boston Globe, “This is false. Period.”

If "we had a responsibility to determine whether or not those rumors were true," why didn't McClatchy from all appearances never report on what they found, i.e., nothing, and who had requested the investigation? (If McClatchy published anything on this, you would think that Asher would have brought it up.) Blumenthal, unless he asked for it, certainly didn't have a right to assume that his request would be kept confidential — and even if he was granted confidentiality, McClatchy still could have reported that "a high-level Clinton operative who requested anonymity" had initiated the request. Blumenthal certainly had no right to demand that a journalist not report the existence of any inquiry that didn't find anything.

Additionally, inquiring minds would like to know exactly when the McClatchy reporter involved made the referenced trip to Kenya, and exactly when he or she concluded that there was no evidence that Obama was born in Kenya.

In this case, given the Clinton-drive rumors which were swirling, finding nothing would certainly have news if it had been reported. If the news service had done this, it might not have stopped the "birther" movement dead in its tracks, but it certainly would have presented a fairly formidable credibility obstacle.

Instead of looking like heroes for bringing up Blumenthal now, Asher and McClatchy are goats for keeping his involvement which led to an actual investigation bottled up for eight long years, and for failing to report the investigation's results.