At the Associated Press on Tuesday morning, Darlene Superville added another chapter to her rarely uninterrupted eight-year exercise in hero-worship coverage of President Barack Obama and his administration.

Superville infamously gobbled up precious press briefing time at a White House briefing last year asking questions about the President's upcoming father-daughter weekend the day after Islamic terrorist attacks in Chattanooga, Tennessee killed five U.S. servicemen. Fast forwarding to the present, she opened her coverage of Obama's return from his two-week Martha's Vineyard vacation with verbiage that would even embarrass tabloid celebrity stalkers. In later paragraphs, she played the "Republicans say" game, and twisted facts about the hard-cash-for-hostages exchange with Iran. (Also, see the Update at the end of this post.)

Superville described the standoff on money to deal with the Zika virus without noting that it's Senate Democrats who won't allow a clean funding bill to get through without guaranteeing continued funding for the abortion and dead baby parts business known as Planned Parenthood (bolds are mine throughout this post):

The White House will continue to press for money to help keep the mosquito-borne Zika virus from spreading and develop a vaccine. The issue took on a new sense of urgency after Florida last week identified the popular Miami tourist haven of South Beach as the second site of Zika transmission on the U.S. mainland. A section of Miami's Wynwood arts district was the first. 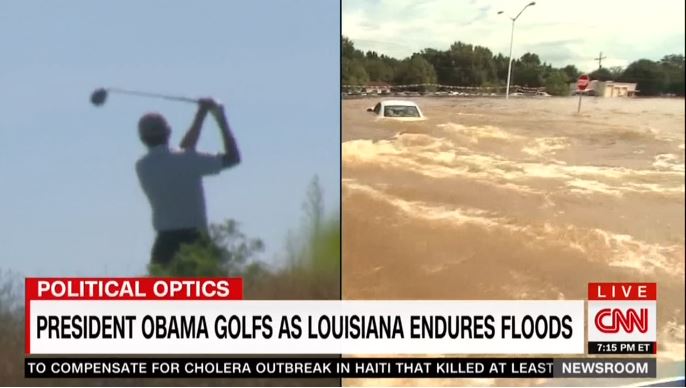 Superville also sloppily covered the administration's hard-cash-for-hostages arrangement with Iran, aka ransom, and acted as if Republicans are the only ones who have objected:

In turn, incensed lawmakers have promised to keep the heat on the administration by holding hearings on the $400 million it delivered to Iran in January. Republicans say the money was ransom to win freedom for four Americans held in Iran. Obama denied that, saying earlier this month that "we do not pay ransom. We didn't here. And we ... won't in the future."

But administration officials also said it made little sense not to "retain maximum leverage," as State Department spokesman John Kirby put it last week, for the money long owed to Iran, to ensure the U.S. citizens' release.

Iran had paid $400 million in the 1970s for U.S. military equipment. Delivery was scrapped after the Iranian government was overthrown.

The fact is that "the State Department acknowledged last week that the payment was contingent on the hostages being released, a notion that President Obama dismissed earlier this month." In other words, no hostages, no money. In plain English, the money was "ransom." Though, as would be expected, "Criticism of the move breaks down sharply along partisan lines," the linked story shows that a far from inconsequential 26 percent of surveyed Democrats oppose the $400 million transfer which took place.

Superville's description of the justification for providing the money was also very incomplete. Yes, the money was "paid" in advance, but as of seven years ago, the U.S. appears to have been under no obligation to return it. Available information would seem to indicate that the money still wasn't owed seven months ago, when hostages held in Iran were released.

John B. Bellinger III, in a column at the Washington Post on October 22, 2009, noted the following inconvenient fact:

In July, the tribunal dismissed, 5 to 4, Iran's claim for $2.2 billion in compensation for military equipment that had been ordered by Shah Mohammad Reza Pahlavi but that the U.S. government had refused to allow U.S. companies to deliver after the hostage crisis. Had the tribunal ordered Washington to pay Iran even a fraction of what it had sought, the administration would have been forced to choose between complying with U.S. obligations under the Algiers Accords, and thus paying millions of dollars (or more) to a government that has been supporting terrorism and secretly building uranium enrichment facilities, or ignoring an international court.

But the Obama administration still faces a threat. The tribunal left the door open for Iran to relitigate aspects of this dispute, and Tehran still has claims worth billions of dollars in other cases.

If there is any evidence that Iran's ability to "relitigate aspects of this dispute" somehow had the potential to restore that $400 million exposure, I haven't found it (the Tribunal's web site requires administrator-reviewed registration; if anything comes of that, I'll update). Bellinger, in a 2014 Wall Street Journal op-ed advocating the Tribunal's end, mentioned "large claims by the Iranian government against the U.S. government for allegedly blocking exports of billions of dollars in military equipment ordered by the shah of Iran during the 1970s," but not the specific dispute the Tribunal dismissed in 2009. Though it may exist, I have also found no evidence that Tribunal decisions can be appealed to another international body.

If — emphasis if — that Tribunal's decision still stood in January of this year, and if the $400 million cash-for-hostages payment was part of the $2.2 billion case Bellinger described in 2009, it would mean that on January 17, President Obama recognized the existence of a liability which a supposedly respected international body had previously dismissed. In other words, Obama decided to pay $400 million the U.S. had officially been relieved of ever being required to pay. This would make the $400 million payment even more obviously ransom than it already is.

On January 18, at the Lawfare blog, a project which involves the left-leaning Brookings Institution, the very same John Bellinger publicly raised the issue of ransom before anyone else did:

U.S. Settlement of Iran Claims Tribunal Claim was Prudent but Possible Linkage to Release of Americans Is Regrettable

The State Department announced yesterday that the United States and Iran had agreed to settle one of the largest remaining claims outstanding at the Iran-US Claims Tribunal in the Hague and that in doing so, the United States had agreed to pay Iran roughly $1.7 billion, consisting of $400 million of Iranian money placed in a Trust Fund to buy U.S. military equipment in the 1970s, plus roughly $1.3 billion in partial payment of interest. We do not have all the details, but this strikes me as a prudent legal/financial settlement and consistent with an approach I have urged for many years, although the timing of yesterday’s announcement makes it appear that it was ransom paid for yesterday’s release of five Americans.

Note that Bellinger was fretting about "linkage" and "ransom" months before the Wall Street Journal and other reports established what is now a quite obvious "linkage."

Bellinger also didn't mention the Tribunal's 2009 dismissal or any subsequent events relating to that specific Iranian claim — even though he linked back to the aforementioned Washington Post column.

One might be tempted to suggest that Darlene Superville, whose LinkedIn resume brags about her involvement in covering Barack Obama's "historic presidency" in two different spots, or perhaps others at the Associated Press, look into the open items raised here. After all, they collectively have a vast network of contacts built up over decades of reporting.

But what would be the point? Superville is just more blatant than the others in making it clear that the wire service's "journalistic" mission is Obama uber alles.

Note: This post was updated on August 24 to recognize the possibility that the $400 million (plus interest) involved in the current cash-for-hostages controversy may not have been part of the $2.2 billion the Tribunal dismissed in 2009. Additionally, I have reached out to Mr. Bellinger for comment, and will update further if I receive a response.