UPDATE, July 17: The Enquirer corrected the error by removing the related sentence and placing the following "correction" below the article's boilerplate describing the paper's three-part series — "Correction: An earlier version incorrectly stated that 220,000 were murdered last year. The total was since Sept. 11, 2001."

A Cincinnati Enquirer reporter and her editors thoroughly embarrassed themselves and their employer on Friday. Additionally, given that the error involved has been present for over 36 hours, they may not realize it unless and until someone tells them about this post.

The reporter, Jessie Balmert, told readers that the number of murders in the U.S. last year was 15 times higher than it actually was. The Enquirer's editors, assuming they exist (one almost hopes that they don't), were also too ignorant to catch the blatantly obvious but agenda-fitting error.

The Enquirer is two-thirds of the way through presenting a predictably left-slanted three-part series on "Anxious Ohio" ahead of this year's major party conventions and the presidential election. The paper says it "conducted 50 interviews early this summer with Ohioans across the state to discover the root of a driving force in the 2016 election: the sense that life in America, in Ohio, is not as good as it used to be."

They aren't even pretending to try to be representative.

Part 1, written by the Enquirer's Jeremy Fugelberg, featured a guy who's not voting out of disgust; his Donald Trump-supporting brother who is described as regularly being in "preacher mode, an attempt to save a voter’s soul"; and a "member of Socialist Alternative in the Cincinnati area" (pictured in a "Socialist Alternative" T-Shirt, more than likely produced by a business trying to make a profit).

Part 2 ("Why are we so mad about race and religion?") was Balmert's province.

Her LinkedIn page indicates that she has about nine years of journalism experience and identifies several awards she has garnered for "Best News Writing" and the like. She currently covers "state government and lawmakers" for the Enquirer and Gannett Ohio. In the latter role, she is "an enterprise reporter with 10 Gannett newspapers across Ohio."

Apparently having never acquired a statistical BS detector while nonetheless advancing her career, Balmert massively misinterpreted a University of North Carolina professor's agenda-driven work. Her editors (to the extent they exist) let it slide right on by.

Charles Kurzman is a sociology professor at UNC-Chapel Hill. He is also a co-director of the Carolina Center for the Study of the Middle East and Muslim Civilizations.

One of Mr. Kurzman's preoccupations is telling the nation that too many of us are "fixated on one form of violence — Islamic terrorism," and don't appreciate "how rare it is." Naturally, Kurzman excludes the September 11, 2001 attacks which killed nearly 3,000 people when making such contentions.

The professor's February 2016 publication, "Muslim-American Involvement with Violent Extremism, 2015," is a predictable exercise. Posing as a dry presentation of statistics, it frames the 81 Muslim-Americans "associated with violent extremist plots in 2015, the highest annual total since 9/11," as an incredibly tiny problem in the following paragraph (bolds are mine throughout this post):

Jessie Balmert apparently found Kurzman's agenda-fitting academic point irresistible, and then vastly misread what he wrote. Here are the opening paragraphs of her Part 2 story:

Hassan Omar wants you to know two things: He loves America, and he isn't a terrorist. 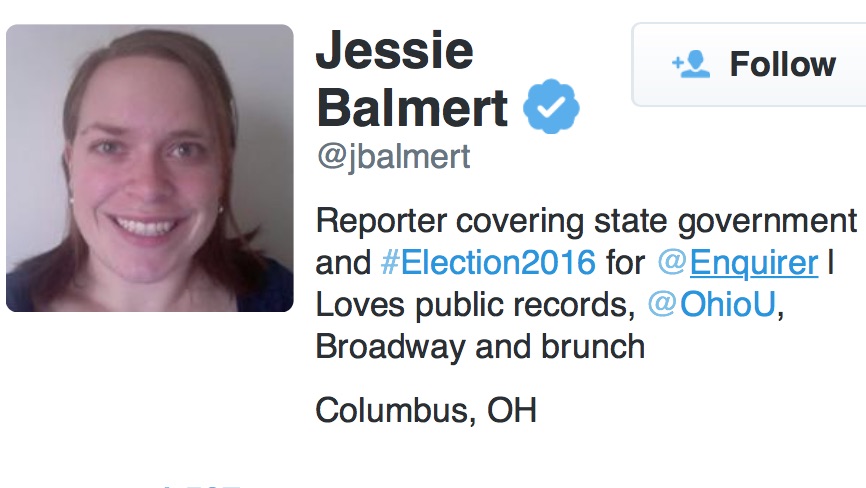 The Somali immigrant turned U.S. citizen credits former President George H.W. Bush with saving millions from famine and warring clans in his home country. At work, Omar helps fellow Somali immigrants find jobs and homes. That's the America he loves, not the one that stares at him suspiciously because of the color of his skin or his Muslim beliefs. But listening to politicians and people on their porch steps, he's not sure which America he lives in.

Omar, of Westerville (near Columbus — Ed.), understands that people are afraid, but many of their fears aren't based in facts. In 2015, 81 Muslim-Americans were associated with violent extremist plots that led to 19 deaths – a small number of the 134 people killed in mass shootings and more than 220,000 people murdered that year, according to a University of North Carolina at Chapel Hill study.

“You cannot label the whole society,” Omar said. “This is human behavior. You cannot predict it.”

If Balmert had gone to the related footnotes in Kurzman's report, she would have found the following:

Part of Balmert's inattention to statistical detail which caused her to claim that the number of murders in 2015 in the U.S. was 15 times higher than it actually was may relate to her clear determination to turn her report into an opinion-driven screed, with the help of a far-left former Buckeye State Representative who has completely lost her bearings, as seen in these later paragraphs:

... President Barack Obama didn't solve race relations by being a black president. The Black Lives Matter movement hasn't stopped unarmed African-Americans from being killed. A sniper can still target police officers protecting protesters in Dallas simply because they are white. The presumptive nominee of a major political party can call some immigrants "rapists," "murderers" and "terrorists" – a move that would-be voters have cheered. Meanwhile, his Democratic competitor, Hillary Clinton, can boast about locking up "the black vote."

The 2016 election didn't start this fire, but it has fanned the flames.

Who has time to verify boring numbers when there are over-the-top, paranoid and partisan points to make?