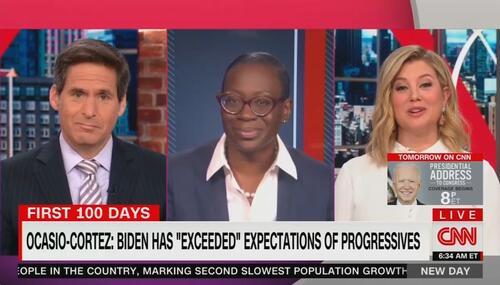 Proving that CNN is all on board with the socialist agenda, New Day co-hosts John Berman and Brianna Keilar on Tuesday morning brought on Nina Turner, 2020 Bernie Sanders campaign co-chair and now congressional candidate to replace Rep. Marcia Fudge. The CNN hosts offered zero pushback as Turner claimed the minimum wage should be "closer to $25 an hour and described the Green New… 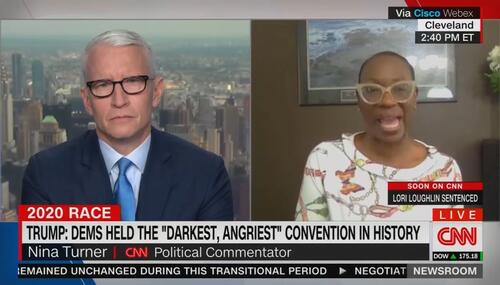 On Friday afternoon, CNN anchor Anderson Cooper reacted stoically as far-left CNN contributor Nina Turner went into a rant trashing the U.S., asserting that "this country is racist," and that it "definitely needs to be redeemed." 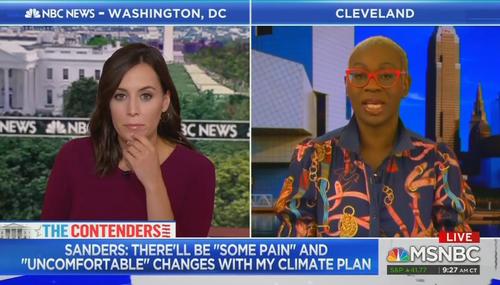 WHAT? MSNBC Grills Bernie Campaign on ‘Pain’ of Climate Plans 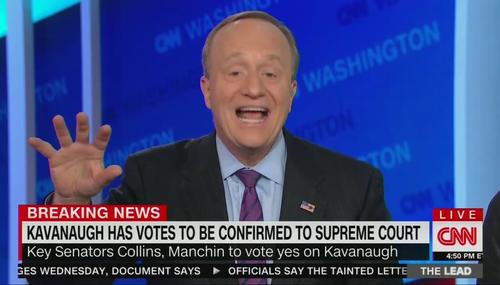 CNN Panel Explodes in Anger After Learning Kavanaugh Has the Votes

Kristine Marsh
October 5th, 2018 6:47 PM
Upon hearing that Judge Brett Kavanaugh had the votes be confirmed, a CNN panel at the 4:00pm EST hour responded as you would expect, with hysterical tirades against the “sexism” and “racism” of America, adding that the Founding Fathers would be upset today, and this confirmation would energize women to vote against Republicans at the midterm elections this November. 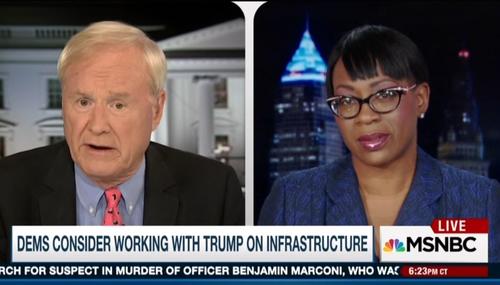 Nicholas Fondacaro
November 21st, 2016 11:23 PM
MSNBC’s Chris Matthews went of the metaphorical high speed rails during Hardball Monday night, as he announced a ridiculous plan to fund high speed rail. “We've got about $30 trillion sitting overseas, because of the tax laws of this country, the corporate tax rates and things like that,” he explained, “You say, ‘Why don't we find a way to grab all of that,… 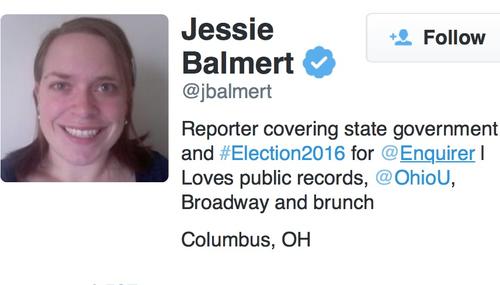 Tom Blumer
July 16th, 2016 9:24 PM
UPDATE, July 17: The Enquirer corrected the error by removing the related sentence and placing the following "correction" below the article's boilerplate describing the paper's three-part series — "Correction: An earlier version incorrectly stated that 220,000 were murdered last year. The total was since Sept. 11, 2001." A Cincinnati Enquirer reporter… 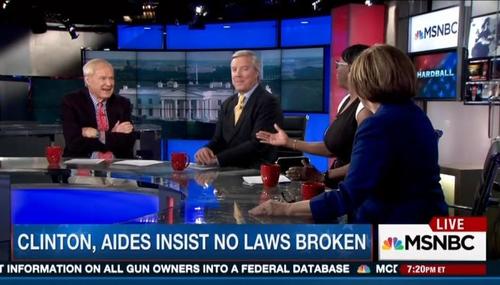 MSNBC Guest: Hillary Should Have Jumped Off the Bridge on E-Mails

Curtis Houck
May 27th, 2016 12:59 PM
The panel on the Thursday edition of MSNBC’s Hardball had plenty to say about Hillary Clinton’s e-mail scandal in light of the State Department Inspector General (IG) report with Sanders supporter/former Democratic State Senator Nina Turner (Ohio) rebuking Clinton for essentially “jump[ing] off the bridge” with her predecessors into private e-mail even though she shouldn… 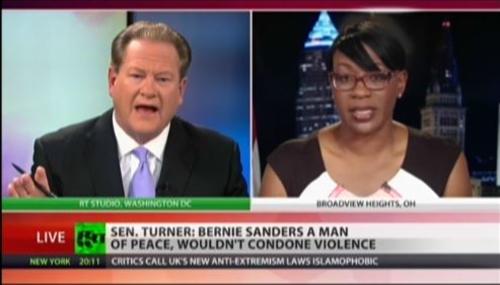 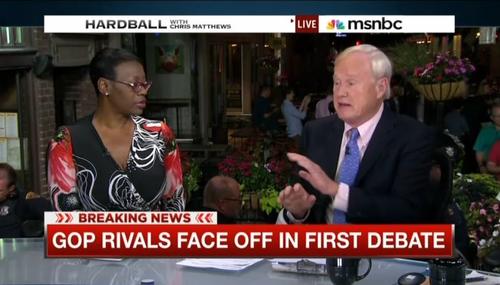 Matthews Whines About No Voter ID, Issues Moms ‘Care About' in Debate

Curtis Houck
August 7th, 2015 2:58 AM
A frequent whiner when it comes to Republicans and voter ID laws, MSNBC’s Hardball host Chris Matthews couldn’t help but briefly commiserate with his guests following the first 2016 GOP presidential debate that the “denial of voting rights” and other issues like “childhood development” that “parents, especially mothers care about” were not discussed… 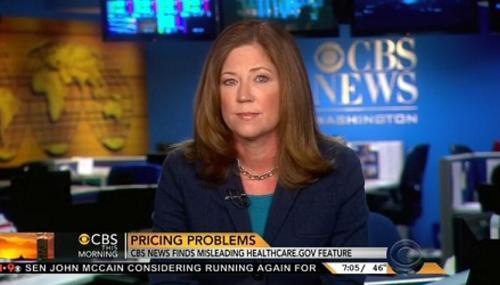 Ken Shepherd
October 23rd, 2013 11:15 AM
Wrapping up the Tuesday, October 22 edition of The Ed Show, fill-in host Michael Eric Dyson chose to "Punch Out" of the program by giving a platform for his guest, Ohio Democrat Nina Turner, to argue that the photo ID voting law in Texas is some devious, sexist plot to thwart the 2014 gubernatorial candidacy of State Senator Wendy Davis (D-Fort Worth). At no point did Dyson… 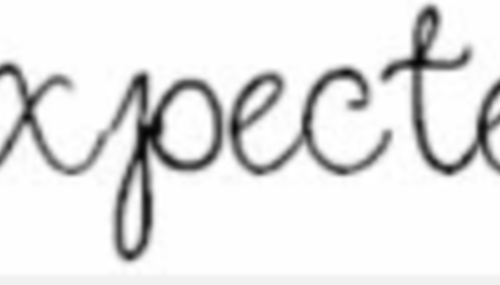 Jeffrey Meyer
June 28th, 2013 3:31 PM
When certain liberal politicians appear on MSNBC, Thomas Roberts tends to act less like a so-called journalist and more like a Democrat fan boy. Take for instance a June 28th interview with frequent MSNBC guest Nina Turner, Democratic state senator from Ohio, brought on to discuss a myriad of liberal pet issues. Following a typical MSNBC interview in which Roberts and Turner tag-teamed to… 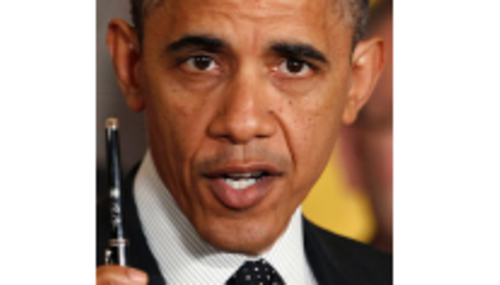 Ohio State Senator's T-shirt: 'GOP Get Out of My Panties

Noel Sheppard
November 14th, 2012 8:04 AM
Remember the Ohio State Democratic Senator who earlier this year introduced a protest bill that would restrict men's access to Viagra? Nina Turner was at it again Tuesday appearing at a Planned Parenthood press conference at the Ohio Statehouse sporting a T-shirt that read "GOP Get Out of My Panties." 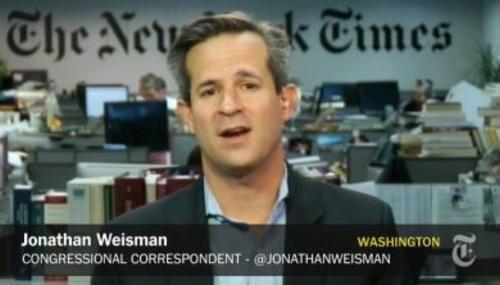 Jack Coleman
October 25th, 2012 6:35 PM
My condolences, Ed. I know how much you wanted to believe this was true -- how much you needed to believe it's true. Not only that, you claimed on your radio show that it was accurate, and more than once, only to learn -- from a political ally! -- that it wasn't. Such are the seldom-felt joys of slogging through left-wing media. (audio clips after page break) 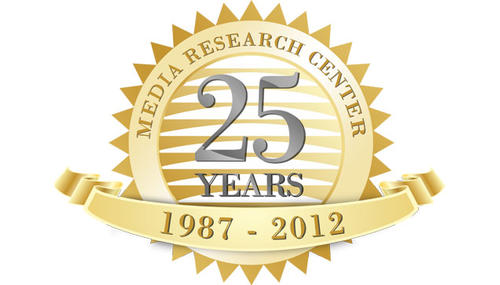 Ken Shepherd
September 17th, 2012 12:39 PM
All this week during the 11 a.m. Eastern MSNBC Live program, "we're going to look at the ballot battles that could decide the race for the White House," MSNBC's Richard Lui noted today as he set up a segment with two liberal opponents of voter ID laws -- "wired into the concerns of minority voters" -- Ohio State Senator Nina Turner (D) and Common Cause staff counsel…